I've been re-reading your story about ploughing. It reminded me of the quotation about ‘the ploughman homeward makes his weary way.’

That’s from Gray’s Elergy in a Country Churchyard.

Wow, you know it! But I got a word wrong, Gray wrote, ‘the ploughman … PLODS his weary way’. So I imagined you plodding home. An apt quotation to fit your story?

Indeed. What you need to understand about quotations is that things were so different then. In today’s world people don’t give a damn about such things. There are so many alternatives — telly, the internet. Quoting things, like you’ve just done, is not in people’s awareness so much now. Nowadays it’s a push-button world. 24/7 — a stream of stuff straight off the box, no time to think. It’s an entirely different existence now to what it was in times past. In my time we’d take up a book by men like Robert Louis Stevenson, and we’d not only read their works for the sake of the story, we’d absorb them. Those books were studied and they were thought about, and bits were committed to memory.

So you didn’t read a book, toss it down and grab the next?

No, no, no, not at all. If it was a good book, we’d think about it and talk about it. It would be pondered over. People would learn bits, and quote what they’d read. To quote things was a part of our life, that’s what was always available, always to hand. Quotations. And I liked the old stories. Charles Dickens. Those yarns made things come to life. And we’d know and repeat what Scrooge or someone said.

Puts me to shame, I did’t memorise much except, ‘Elementary, my dear Watson’ — and even that wasn’t exactly what Conan Doyle wrote.

There have been tremendous changes during my lifetime. I’ve seen them and noted them, and people don’t enjoy quotations like they used to.

My grandma consistently sprinkled quotations through her conversations. ‘To thine own self be true, and it must follow, as the night the day, thou canst not then be false to any man.' It was done for fun, but sometimes there was a moral to it.

My father had a big thing about that. For most of his life he lived to quote old stuff. That was something he liked to do — quote something old and fitting. So you could say it was bred into us in those times, by the older folk.

You’re absolutely right! By the age of seven I’d certainly learned it was fitting to quote things. It was already ingrained into me, but, at seven, I didn’t actually know many quotations. One day, during the war, Grandma got a telegram. She opened it, looked down at me, her lip started trembling and she read me the news, ‘We regret to inform you that your son, Robert Clement Mechen has been wounded …’

I was frightened by the emotion in her voice. I didn’t know what was going on, but I was absolutely certain, in my wee 7-year-old brain, that the occasion demanded a quotation, so I blurted out the first quote that came to mind — it was probably my only one. ‘Better late than never’, I said. Of course Grandma burst into tears.

I can understand that. You can only say what you know. Well, my dad liked to put it out there too. He’d quote it, FLING IT OUT, and to most people it was pretty obscure, but he didn’t care — didn’t give a damn. If it appealed to him he’d let it loose, set it free. It’s all to do with what’s in your own mind, your own memory. I might have told you before that all sorts of things come back to me when I’m nearly asleep. Great memories. Sayings. Words that were said. Images. They come floating back. It’s what I’ve found in my last many years. But in the morning I can’t remember a damn thing. GONE!

That’s why I keep a notebook beside my bed.

Writing! It’s never been my thing. I can think okay, and remember lots of things — no trouble at all, but getting it down on paper, that’s a complete NO NO.

Often, when I was working at the Dairy Company, they’d come and offer me a promotion, a better job, further up the ladder. There was no doubt I could do it okay but how the hell would I keep the books? Recording things is not my thing. ‘A man in his life plays many parts’, but for me, writing is not a part I've ever played.

I quite like writing. It’s fun being your scribe and …

The scribe was a noble calling. They had to be well educated, and listen carefully, and get it right. It all goes a way back to the time before the masses could read. I’m glad you’ve taken on the job of scribe, but for me, writing it down is not in my genes, not part of my makeup. I’ve always enjoyed reading and listening and hearing stories. But what I enjoy most is talking. And that’s where quotations can come in valuable.

‘A man in his life may play many parts.’ Who’d have thought I’d end up a scribe? It’s a pretty obscure profession these days, but, ‘If the cap fits, wear it.’

Now, in our house, when I was a lad, we had A HUGE book. The Complete Works of William Shakespeare’, and my father got it as a prize. It was full of quotations.

‘An apt quotation is unto speech as a diamond is to a crown.’

That’s a good one. Who said that? 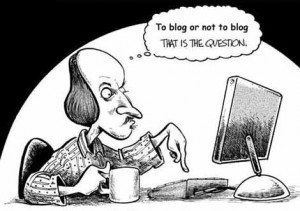