Did you know your mother’s brothers and sisters very well? In our conversations you have mainly talked about your father’s family — the Leylands.

We knew the Wischnowsky lot very well. In fact there were lots of them — hordes. The grandparents — old Carl and Wilhemina — they were just a part of a large group that escaped from Northern Europe. Persecution. Intolerance. So they fled, they wanted to get out, escape, to get something better or more interesting.

There were boatloads of them, not just one or two people, large numbers, spreading out, across the world. Some went to Australia, some to Canada, Africa, America — wherever they could spread to that might be better, safer, newer.

Now, they didn’t undertake this escaping lightly, or for entertainment — it wasn’t done for fun. There was a good economic reason. They were accomplished people, with skills to use or sell. They were farmers and craftsmen.

That was the big picture, the background, the wide scene of it all, but the result for me, a descendant, was a  great conflict in my mind. I’ve sorted it out now, but back then, when I was growing up surrounded by these immigrants there was a real problem, a dilemma, a legacy for me to confront.

See, Mum’s people, they were what I’d call ‘tribal people’, from Poland. And as I’ve said there were hordes of them, a Polish tribe, and you’ll remember that I’ve explained before how they were classed as Germans, simply because Poland had been swallowed up into Germany way back then, and these tribal people — when New Zealand got involved in the First World War — were associated with those ‘TERRIBLE HUNS’. The Horrible Germans. My tribe carried the stigma. And I had to ask myself a question about these people who I knew so well — this tribe — these lifestyle farmers who worked so hard and were a real joy to be with. And I tried to rationalize it all, and all the things I saw, so I asked myself the question, ‘What makes my family so bloody awful? What are they so hated?’

There was no doubt about it, the German situation was a serious issue. There was absolutely no in-between. I had to face it. There was serious conflict in my own home, the English Leyland’s versus ‘those DIRTY GERMANS’. DIRTY! That was they word used. There was scorn, the Leyland’s were very scornful. But I knew my mother’s people, these German/Poles. And they were not dirty at all. They were good, clean people. We boys loved visiting them, and Mum regarded that Halcombe countryside as ‘home’. At every and any opportunity she’d ‘take us home’.

So for a while I had to walk with each foot in a different furrow, and as a kid you have no option but to accept life as you find it, and go with the flow. That was the way life turned out.

I found a letter by a family researcher that indicates things could have turned out very differently.

What did it say?

I can read part of it. The writer signed him or herself as ‘Natzke’.

Natzke? I know that name. It was like a branch, or a connection of the family — a Halcombe name. There was one bloke, Oscar Natzke, he may have been connected to our lot, a man with a big voice — not really spectacular, but very good, and, in fact, he got around all over the world, and made a living at it. Natzke.

Well, the Natzke who wrote this letter was definitely linked to the Wischnowskys. Here’s what they say:-

‘However according to recent information I have received from the Kokoszkowy Village association, a letter from a Mr Borys Niewinski informs us that all those emigrating on 12 April 1876 on the Fritz Reuter were "sold like stock" to an agent from a New Zealand company recruiting migrants for five pounds a head! Accordingly the ship sailed to New Zealand not America and arrived in Wellington Harbour 4 August 1876. There was trouble with the immigration authorities - probably because they were supposed to be in AMERICA not New Zealand! On compassionate grounds the passengers were allowed to go ashore and eventually were sought out by a Mr Halcombe for a new development he was starting at the place that later bore his name. My great grandfather was Otto von Wischnowsky.   Signed NATZKE.’

So, there you are, Peter, Otto was your grandfather’s brother.

Well, I don’t know who this ‘Natzke’ is, but if all that’s true, then we’re lucky to be here in New Zealand.

I’ll phone back in a day or two.

Good boy. I enjoy it. 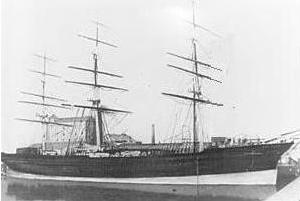 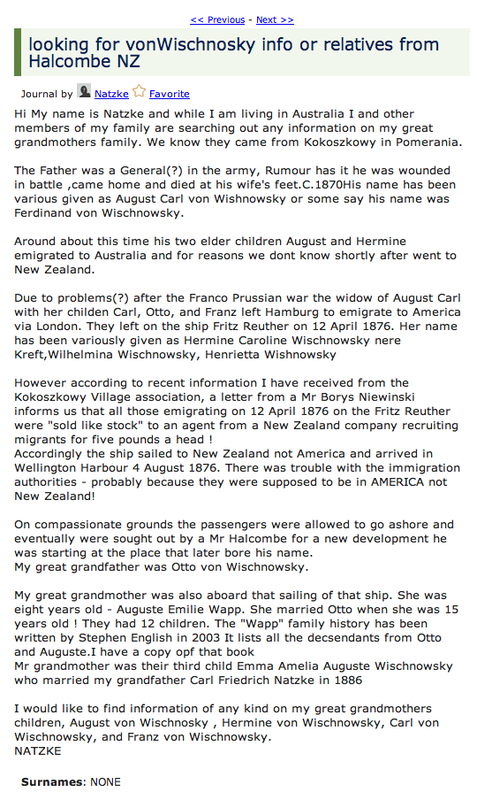