The Parsnip and the Spud

Can I tell you something that puzzled me about Old Phil.

I've got a photo of him dangling a parsnip but its root. He seemed to be extremely proud of it. What amazed me was the length of it — well over four foot long. Could a parsnip really have a taproot that long?


I suppose that could happen 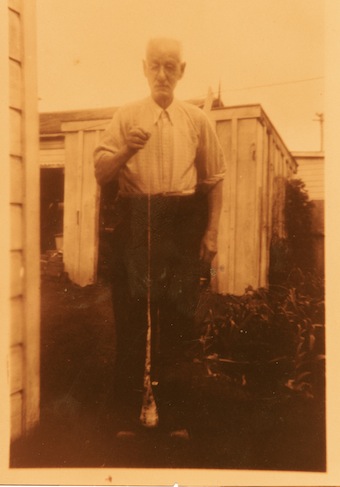 It looked unbelievable. Was a joke? Perhaps Old Phil had tied a bit of string onto it.

I don’t imagine he’d do that kind of thing. He was a bit dour. Yorkshire. He wouldn’t even think of it. I can almost hear him saying, ‘A Leyland wouldn’t do that! Despicable. You’d have to be a cheat and a mongrel.’

How tall was Old Phil?

About the same as me and your dad — five foot and seven or eight inches.

Then the parsnip was about four foot three inches long. 130 centimeters.

There was one incredible memory I’ve just had of something that cropped up in my compost heap. It was always the thing to have a compost heap for the leaves and trimmings and the vegetable peelings that didn’t go in the soup. Everyone who was into gardening had a compost heap, and some were large, like the one Jean’s brother had up at Tuia near Lake Waikaremoana. He was the caretaker and gardener at the power station, and they had some permanent staff, so he grew vegetables for the village.

And one year, here in Palmerston North, I found a potato plant had sprouted out of the bottom of my compost heap. There it was, happily flourishing out the base of the heap, and it keep on growing so I let it be, I just let it do its thing and worked around it.

Now I was accustomed to potatoes and the best way to treat them. When it was time to harvest this plant that had sprouted all by itself, we found there was enough there to feed the family for seven meals. SEVEN! Off the one plant. We had seven goes at it, a full week.

That must have been several buckets full of spuds.

No, no. It wasn’t a lot of potatoes, it was ONE HUGE SPUD! Only ONE. I think it must have been seven pound or more in weight.

How many mouths in the family?

Probably three or four, depending on who was around, maybe five sometimes.

And who took the credit?