Fishing.
There's more to fishing than catching fish! Peter Leyland reveals where the real action is.

This book began life as a phone call on what was one of the most difficult days of Peter’s life, 21st February 2011. This first story landed in my lap that day, and I netted a follow-up the next. These two stories laid the foundation for this collection and provided the inspiration for the conversational format used.Subsequent stories emerged when Peter pounced on a passing comment, answered a question, or was bursting to tell me of an ‘ancient memory’ that had recently resurfaced in his mind.
Let’s raise the curtain …

Hi, Uncle Peter, I didn’t phone earlier because I expect you’ve been pretty busy during the day.

John, it has been a busy day. We’ve had lots of phone calls. Everything’s a bit black, and this is a bad time. As you know, today I’ve lost a wife of 72 years, and they’ve lost a mother. I’ve lost a friend. She was such an important figure in our family, always interested, always there. Fortunately for me I’m here in Levin with Philip and Yvonne, and they are doing things for me. They’re taking over now. Previously Jean and I would do this kind of thing. We’d make arrangements and deal with these things, but now it’s fallen to them.

I’m sorry, and I really don’t know what to say. So much has gone, but I guess you still have your memories. I’d like to hear some whenever you feel like talking. For example, I never heard how you and Jean met. Was it at the Church of Christ?

It was way back before The War — in the 1930s in fact. Jean — her full name was actually Myra Jean Spicer — she had an older sister who was married to a man who was totally infatuated with fishing. He was one of that group of mad-keen Manawatu fishermen who spent all their spare time chasing after fish. Jean boarded with her sister and this fish-crazy brother-in-law in their house in Palmerston North. During the day Jean worked all over town as a domestic help.

Well, I happened to get to know this man, and he took me fishing. After a while it transpired that he thought we'd do much better as fishermen if we had a boat. So I suggested that I make one. He was overjoyed! ‘Get it done!’ he said.

It was nothing flash — just a dinghy — my own invented kind of homemade rowboat. The construction took place at the old Leyland house in College Street, on the verandah, that big ‘L-shaped’ affair. We got all the bits and pieces together, and organised things so we could deal with it all.

I made my dinghy out of some pine planks. White pine it was. I just made it up — a primitive boat you might say. It was okay to row in, and I made a sort of shelf or ledge at the back. You've got to have something to put the net on.


Where did you go fishing?

Foxton. Building the boat was one thing, but getting it down the river to the Manawatu Heads at Foxton was another. We had to get my invention all the way. Grandad watched my progress, and he offered to help out. Old Phil was like that. He was quite happy about helping. He put it pretty plain. ‘You build it, and I’ll get it to the river. No problem, boy.’

Old Phil was still in the cartage business — with his horse and cart.  He was about 80-years-old, but still delivering goods around the city. He was the last of the old-style carriers in Palmerston North — everyone else was into trucks.

So when the time came, Old Phil arrived with his horse and wagon and we lifted the boat on and clip-clopped down Fitzherbert Avenue to the river. ‘We’ll launch it there, under the bridge,’ he said.

You rowed it from there, all they way down to Foxton? That must be 30 miles!

At least 30. It’s very winding — in and out — in fact my fish-mad friend had an expression for it. ‘This river would break a snake’s back.’

We took off, wandering down the Manawatu, a bit like Tom Sawyer and Huck Finn. I didn’t do much of the rowing — didn’t know how, so the other bloke did it. He knew about rowing, the old-fashioned style, facing backwards, in reverse, like people have done for centuries. And on the way he taught me.

He wore shorts and a singlet, and it was a hot day. I remember his complaints. ‘Peter, I’ve got the seam of my singlet right under my backside, and it’s biting into my bum!’

From then on, when we went fishing down at the mouth of the river, we’d launch my rowboat, (nothing flash), and row across the river, trailing out the net behind us. There’s a technical term for this. ‘Shoot the net’. Of course, you've got to tie the starting-end to the bank before you set off. Then we'd paddle over to the far side, do a U-turn, and row back, ‘shooting the net’ as we went. When we got back to shore we'd wait a while, then drag the net in. That's a two-man job, one man for each end of the net. It's not easy work. It was a long net and it had lead weights to hold it down. One day however, the net was harder than usual to pull in, and as we were huffing and puffing on the ropes he says to me, 'Peter, I think we've got something snagged. Maybe it’s a log.’

'Or a lump of petrified wood,' I said.

So we hauled and hauled and when we finally got it, as well as a load of flounder there were six of the biggest snapper we had ever seen. Such a feed!

Now, of an evening, my friend would sit at one side of the fireplace, beside the end of the mantelpiece. He always sat at the right-hand end. That was his end, where he sat, because that was the end of the mantelpiece where he'd placed an enormous screw. He’d bored it into the wood — thick, solid wood. And of an evening he'd sit there, for hours on end, him and this enormous screw, and lots of fishing net rope beside him. He bought the rope from some place in Wellington — lots of it — miles and miles, and every evening, day in, day out, he'd sit there beside his mantelpiece, and he'd knit. He'd knit for hours on end, making our huge, long flounder nets. It was a simple system, used all over the world for hundreds of years. The screw was there to hang the net on, so it could be tensioned up as he worked on it. And he had a block of wood, about the size of the palm of your hand — a ‘blank’ was what he called it — and he’d loop the rope around it, and knot it off with a half-hitched loop. And I'd sit and watch. I'd be there for hours and hours.

Didn’t you get involved in the net making activity?

No, no, no — I wasn’t there because of his net! I was interested in the female side of things. I was too busy chatting to Jean. You could say I was  — angling. 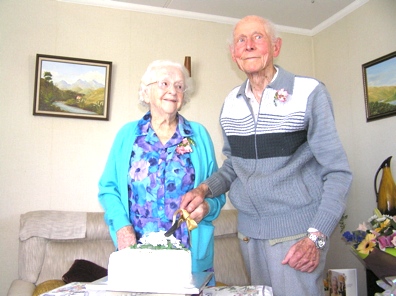