She Grabbed Us!
An unaccustomed show of affection.

… John, when we were talking the other day, we mentioned my grandmother, Old Phil’s wife, and what I found a bit strange at the time was that I didn’t remember ever meeting her, or seeing her! But after you asked me about her — when we’d finished talking — I decided to try and recall something for the next time you phoned me. So I did some roaming, mentally, in my mind.

And did you remember anything?

Yes. At first I had no memories at all — but then — a vague recollection. Sometimes, when I go to bed, I have old memories come into my mind, and if I relax, some more will come. Things I’d forgotten. Snippets. The name of a shop. Something that was said — or the old grandmother. It all started coming back, like out of a fog, a memory of the ‘old lady’, who lived in the north part of town.

In Broad Street? I know she was living at 79 Broad Street from 1911 to around 1917, during the First World War. 79 Broad Street was what is now 277 Broadway, near the corner of Albert Street. Your grandfather, Old Phil, was still in Waipawa at the time.

Perhaps it was Broad Street, up the north end from the Square.

Dad’s sister, my old Aunty Florrie, she had her explanation about the grandmother. She’d say, ‘Those people — those Alleys — they’re Irish, you know — and because of that they’re different. They have different ways.’

Your grandparents seemed to live apart for a long time. Why was that?

It seemed like the olds might have had a split, at least for a decade or so, but I can’t say for sure. Old Phil was supposed to be farming ‘up the line’. Then he was working as head of a road gang, then he was ‘selling the farm’, then he was busy as a shearer. We never found out the real details. Only snippets. We were young.

Yes, but my memory tells me that perhaps there was one occasion when Florrie took her blind friend Maggie, to visit Florrie’s mother, that ‘Irish Contradiction'. I sort of remember Florrie going to visit.

But I also had another memory. As boys, we got to hear stories and talk about the ‘old lady’, and one day our mother took us to visit this old Grandmother Leyland. She was an old lady, and she gave us quite a shock. It’s all coming back to me now.

We were startled! There was no such thing as ‘being affectionate’ in our home, but this old lady, she reached out and grabbed us. GRABBED US! Oh, she hugged us and she kissed us. She made such a fuss over us, hugs — kisses — hugs! We were HORRIFIED! In fact we felt insulted. Yes, it was insulting to us — her making all that fuss. It was like an invasion. It wasn’t right to be handled in such an affectionate way.

Some families did go in for affection — but not our parents. No, no! We were supposed to be self reliant. None of that nonsense. 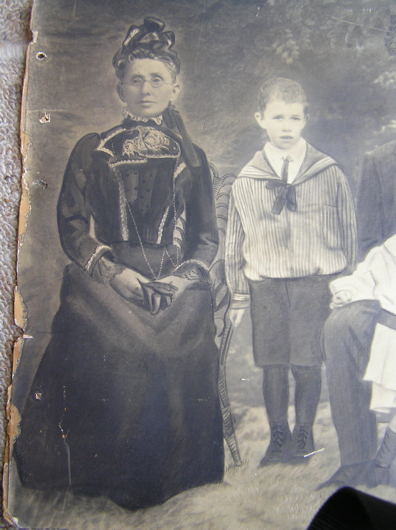 The photograph of Peter’s grandmother (Frances Eliza Leyland, nee Alley) was, judging by her clothes, taken in the late 1880s or during the 1890s. It was subsequently superimposed on a later photo of her son Frederick’s family, taken around 1915. The resultant image was then retouched by hand. The chair Eliza sits on, has been drawn onto the later photo. This is an early example of what today would be called ‘Photoshopping’. However the shadow on Eliza's face, and the lack of shadow on her grandson (Sydney Norman jnr), were not dealt with by the artist. (Photo by courtesy of Ngaire Rasmussen.)