The Man In The Tent

… but, getting back to those early days, there was a group in Australia who had plenty of money. They financed a ‘missioner’ to come to New Zealand. He was a preacher, an evangelist with a big loud voice, and a presence. A real orator. Well, this mission came to Palmerston North and set up a huge gospel tent on an empty section in Main Street. These people took their crusade very seriously. Every night, after the sermon, the preacher called for people in the audience to come forward and join the church. It was an ‘altar call’, with the piano softly playing, and the preacher pleading. I remember the piano, it would arrive on a truck and a group of burly men would carry it in.

Now, before I joined the Church of Christ, Aunty Florrie and Blind Aunt (her name was actually ‘Maggie’ — Aunt Maggie), well Florrie and Maggie went to this mission. Every night it was on, they’d wash the dinner dishes, put on their best clothes and march off to the tent. And they didn’t walk, no, they marched! Left, right, left! This went on for quite a while, until one day they said, ‘Young Pete, you could do with a few lessons.’ And they kept working away at me, and at my brothers too, until we three got talked into going.

Just as a sidelight, I’ll tell you one little story. This Australian missioner was Mr Hendrickson. Actually there were two  ‘Mr Hendricksons’ over a period of time. Those tent missions would get repeated every so often. The first of the Hendricksons was E.C. E.C. did the tent missions. Later there was another, he may have been a younger brother. I think his name was Alfred — yes, they called him Alf — Alf Hendrickson. He came later, and was our minister at the local church in Campbell Street. He was paid by New Zealand and was quieter than E.C. He was more of a pastor, looking after the flock. He wasn’t half as good as a preacher, but he was quite useful.

Anyway, like I said, E.C.Hendrickson had a good voice, a very good voice. The Gospel Tent people didn’t have microphones in those days. They just SHOUTED! And we heard tell of one young man who lived near where the tent was pitched. He had a job that began in the very early morning. He worked in a bakehouse, and started at 5am. And one night when this big row was going on as usual from this chap Hendrickson, this young man started complaining. He said to his father, ‘Dad, I need to get some sleep, and I can’t, because of the voice from the tent.’

His father said to him, ‘Look, boy. You can’t sleep, and he can’t shut up. There’s no hope. I can’t stop the noise. The only thing you can do is get up, get dressed, and go and listen.’

Well, getting back to my story, these two aunts kept pushing at us to go and listen. They got us boys all primed up to go and join up when the call came, after the preaching. That’s how we all got into the Church of Christ. It was a very serious business for the aunts, but to us three boys it was a bit of a joke. The aunts would get us all dressed up in our best clothes and drag us off to the tent. It was a big tent, like circus-size, and every night Hendrickson would fill it up. We’d be ordered to behave ourselves. They made us go, and made sure we’d be respectable. We were chaperoned.

Even though we all got involved in the church, my father and Old Phil had nothing to do with it. Old Phil wasn’t the slightest bit interested –– he couldn’t have cared less. In fact, he’d laugh about it!

I noticed in the church Roll Book for the 1930s that you, your brothers, Aunt Florrie, my mother Edith Mechen, and her father and brother, all joined that church, and alongside every one of their names were the letters ‘F & O’.

That meant ‘Faith and Obedience’ A person was accepted into the church on the basis of their faith and their obedience. ‘Obedience’ required you to be publicly baptised by immersion. You’d have noticed the small ‘swimming pool’ at the church – the Baptistry. We’d warm the water up, and there were a pair of waders – kept in the back of the church – so the person doing the baptising could keep his day-clothes dry. And, of course we’d sing – ‘Up From the Grave He Arose. With a mighty triumph o’er His foes.’ It’s all symbolic. Rebirth. 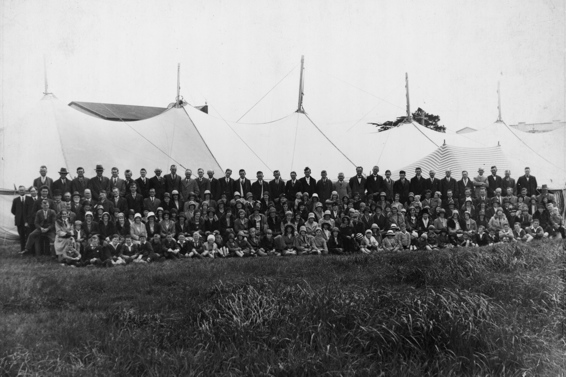 ‘In 1931-1932 a nationally organised evangelistic Tent Mission campaign came to Palmerston North (late 1931) as part of its tour of the Churches of Christ of New Zealand. The photograph shows the congregation outside the tent at the conclusion of the campaign. The tent was pitched on open land in Main Street not far from the corner of Princess Street.’ (Digital Library Print Quality Images 2007N_C109_A-E_0301 Ian Matheson Archives. P.Nth City Library.)