Hi, Peter. I did a bit of water blasting the other day. I like the electric powered ones best. The petrol motors are too noisy, and temperamental.

Well, of course my dad knew all about engines. For a while he made a living from them. We learned from him. In those days there was no electricity supply to most of the out-back farms, so the milking machines that he installed ran off a petrol motor. Most farmers couldn’t tune or work them, so Dad was busy adjusting and teaching. He was quite an authority on petrol engines. In actual fact the bloke Ridd who improved on the other milking machines — I think he was a local chap — Inglewood or some such, well he was one of those New Zealand engineers and farmers that was on the lookout for a better way of doing things. And the original milking machines came out from England or somewhere, and they did a good job. But the dairy industry was really getting into its stride — growing rapidly — and the locals looked at these imported machines and said to themselves, ‘these things are only machines, just mechanical things all bolted together. Perhaps we can do better.’

So new milking machines were developed. And the engines were selected for economy. They were ‘single-banger’ engines. One cylinder. Petrol was expensive, and kerosene was cheap. So the favoured motor for the milking machine was a kerosene engine, but you used petrol to start it, and when it was running hot, you’d switch over to kerosene. It took a bit of understanding.

Then, he also knew people who liked motors for fun or sport. Percy Coleman was one. Percy got to be the world Dirt Track Champion. He was a local chap from around here. He went out and conquered the world, that’s what he did.

The dirt-bike racers used to have meetings all over the country. Very popular. The riders would travel to Ashhurst, Palmerston, Whanganui, and further afield — Trentham, Auckland, wherever there was a track. They didn’t have their own tracks, but used the local racetrack. The horse course. They were one mile tracks, and the riders would go around several times.

It was not only a competition, but it was also a show thing — to get the crowds. Exciting and noisy. A special occasion.

Percy was the tops. Famous. And Dad knew him. Dad didn’t work on Percy’s bikes, but he could have, he had the know-how. He could have tuned then up real good, but Percy had a mechanic to do that.

One day when Dad visited the races he spoke to Percy. And Dad said to me later, ‘I was having a chat with Percy, and did you know he’s blind in one eye. He had an accident when he was young. But I watched him racing around the horse track, and skimming along beside the railings. Those fence-rails are there to stop horses taking a short cut. Big, strong rails. Substantial. And I went up to Percy after a race and asked him how he managed to ride so fast around the grass horse track with one eye missing.’

Percy Coleman — he was World Champion you know — he said to Dad, ‘It’s easy, Mick. You only need one good eye. There’s the race course, and there’s the railing. What you have to do is fasten your good eye onto the fence, and you just watch the fence go by. And you go so you’re almost touching it.’

I heard some time later that Percy was known to bark his knuckles on the railings — he was so intent on winning. Blind in one eye! 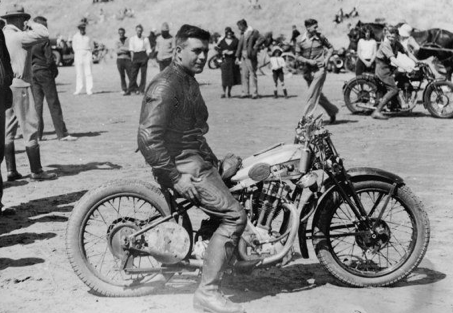