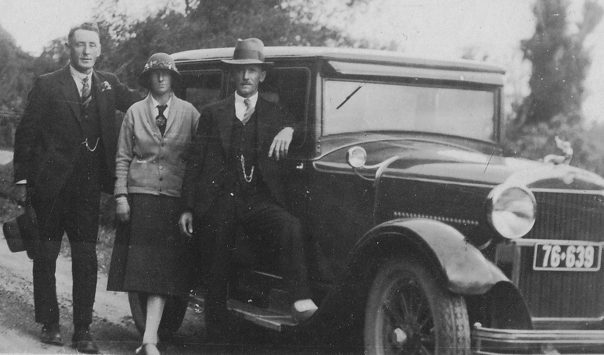 Hello, Uncle Peter. What have you been up to?

‘Sometimes I sits and thinks, and sometimes I just sits.’ That’s me, today — just resting. But that saying, ‘I just sits’, it reminds me of rest homes. What have you got for me today?

I was fossicking around and found an old photo of your father — don’t know where I got it. He was all dressed up — flower in his buttonhole, and standing next to a couple posing beside a car. On the back of the photo was written ‘Ernest’ and ‘Mr. and Mrs. Dave Watson’. Your half-brother John and his friends  helped to date the photo. They thought that the car was a 1928 Essex, and I found that the diamond shape in the centre of the number plate confirmed it.

You can tell all that from a photo?

They issued new plates each year, with a different symbol every year. You can also get clues from the woman's cloche hat, and the length of her skirt. I’d say the Watsons had a few bob.

What else could you tell?

It’s only a guess, but your dad’s body language might indicate that he had a soft spot for Mrs. Watson — the way he's leaning, and the position of his arm.

Well, there certainly was a family connection with the Watsons, they were very good friends. Dave was a Master Plumber in Palmerston North. Top man. They visited us, and we visited them. You see, brother Bill and I visited the Watsons a lot. We were always welcome there. And there was some history going on which I didn’t hear about for years — till I was 20 or 25.

I still don’t know the full history — I was young, but I do remember that woman. In fact I was startled on one occasion. I remember it well — I was very surprised by her — startled in fact. I had paid a visit, as I did, and Mrs. Watson, she said to me, ‘Peter, I’m very pleased to have had a visit from you.’ And we were having a chat as I was leaving, and I was astonished when she said to me — she astounded me — she said, ‘Peter, I should have been your mother.’

Imagine that! ‘I should have been your mother.’ Mrs Una Watson said that.

What did your mother make of Mrs. Watson?

Mum knew some background, and was very scornful. She treated all the stuff about Una Watson as silly gossip, but she didn’t like the story at all.

Story? There was a story there — some gossip?

Well, as I said, it wasn’t until I was about 20 or 25 that I eventually heard what might have been the real story.

There was some talk that Dad had married Mum ‘to spite’ his former girlfriend who had jilted him. The former girlfriend’s name was Una. And she was said to have been ‘the girl’, back in Hawke's Bay. Beautiful. Talented. And he was engaged to her, or so the story goes. Well, he had a row with Una, and he married Miss Wischnowsky shortly after.

According to this version of history, Mum — when she found out that Dad had married her ‘on the rebound’ — she kicked up a fuss. She found out shortly after their wedding, and for the next fifteen or so years there was continual trouble between them.

Mum had a very old-fashioned attitude to life. There was no doubt she was very capable — she couldn’t do enough for us. She was full of good work for us when I was a kid, BUT she was also full of superstition — very European in her thinking — stars — horoscopes — all that sort of thing. Superstition was very strong in her, and what made it worse — much worse — was a silly business — she thought she was in love with Dad! But he’d made it clear she was ‘a rebound bride’. 2nd fiddle. And she spent the next 15 or 16 years at war with Ernest Leyland.

She made the running. The vendetta. She was the aggrieved one. Dad didn’t fight back. He’d just try to grin and bear it — and go away to work. It was a very unhappy marriage, but through it all we kids were well cared for, always well fed.

In general Mum was an entertaining talker, but she got to be very taciturn with Dad. They squabbled about everything. She wasn’t as educated as Dad, maybe that came into it. Sometimes they seemed to squabble about us kids. We thought they were arguing because of us. We didn’t know the basic cause.

What effect did this have on you boys?

Well, there was no affection much from Mum. She wasn’t like that. We weren’t used to shows of affection. Bill and Fred — they shrugged it off, got on with things.

Dad told us later, Mum had threatened to harm us children. She told him, as he was on his way out to work. She caused him a lot of anxiety. He may have even come to regard her as being a bit crazy. Dad finally got to have the opinion Mum wasn’t fit to raise children. Eventually all this bickering came to a head and the marriage broke up. I was about 15 when it ended. Must have been around 1926.

Mum took us boys and we lived in various rooms and flats and houses. There was one, in Domain Street, real close to where the old railway station used to be. Mum earned a bit of money by sewing, and probably got a bit of maintenance from Dad. But the battle still continued. Dad tried to keep in contact with us. We were fond of him, in fact he was actually the more agreeable one. But there were squabbles over maintenance. After a while he persuaded Bill and I, when we were teenagers and I was working, to leave Mum and live with him and Aunty Florrie and Old Phil at College Street.

Fred was the youngest. He stayed with Mum. Bill and I were separated from him for a while. But he came across to College Street when he was about 15. Perhaps it was when he started work. It was prior to the 2nd World War. Mid 1930s perhaps.