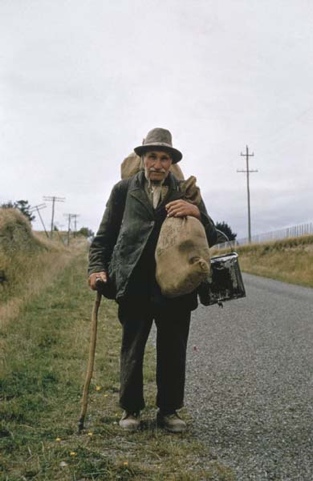 After his arrival in New Zealand in 1912 — by virtue of a shipwreck near Gisborne — the Latvian, Ivan Kruman (Barrett Crumen ) was nicknamed Russian Jack. He had set off to walk to Wellington to get another ship, but he never made it. Instead he spent the next 55 years walking around Hawkes Bay, Wairarapa and Manawatu. This photo was taken around 1960 by District Nurse Margaret MacPherson, and is available from The Alexander Turnball Library (ref PA12-2130)

Hi, Peter. You once mentioned a man named Russian Jack. I’ve discovered there’s a statue in his honour —over in Masterton.

Russian Jack? A statue in Masterton? Of course he was ‘someone’ in his day. I know about him.

He was what we called a ‘swaggie’ — a swagman. Those men were a common sight during the 1930s and 1940s. On the roads, tramping about. There were lots of them. It was a part of those times.

Did you ever meet Russian Jack?

No. But I saw him on the roads from time to time. He was probably the last of the professional swaggers. They gradually died out — faded away. But Jack outlived most of them, and roamed the North Island, a bit of a circuit, doing odd jobs. Wairarapa, Manawatu, Hawke’s Bay. He’d cadge a feed. He’d trudge in over the hills from Pahiatua and tramp on down  through Palmerston North.

So where did you see him?

He must have been a good walker. He was a regular sight. You’d be on the road, or look out some window, and there, away in the distance, away along the road, a speck on the horizon, you’d see him coming — Russian Jack. Sometimes he’d come over the ranges, across from the Wairarapa by way of the Pahiatua Track, and tramp down into the city. He had his routines.

If Jack came into Palmerston North via the Fitzherbert Bridge, he’d have passed close to your grandfather’s place.  Did he ever call in? Did he know Old Phil?

Oh yes. They met. And my old Aunt Florrie, she’d have a kind word and a feed for him.

In those days there wasn’t much by way of Welfare, no handouts or Government assistance, so those homeless ones had to cadge a feed or they’d starve. Sometimes they’d get a bit of a job, or find a haystack to sleep in. And some even established a reputation. They got well known, and old Jack did that — made a name for himself. He survived, and became a real identity. He was the last of them. A survivor.

Now Aunt Florrie, she gave him some attention. She was one who helped him. It was very interesting the way women reacted to him. Some saw him as frightening, scary, terrifying. Old Jack was a good bloke, but he looked a bit ragged, and to some women he seemed like a threat, scary, alarming. But Florrie took it in her stride. It turned out that people’s reaction to Jack was more to do with how they saw things than with what he was actually like. Florrie wasn’t bothered by him, didn’t turn a hair, so he was a regular in the Leyland house in College Street.

There’s no doubt about it, Russian Jack didn’t starve. People watched out for him. In fact some people made a bit of a fuss about him. And Aunt Florrie not only knew Jack and gave him a feed on his way through, she was actually quite proud of it, because Jack had become a bit of a celebrity.

So knowing Jack was something to brag about?

Oh yes. There was no doubt about it. You were really someone if you gave Jack a feed. You could boast about it, particularly as some folk were scared stiff of him, they wouldn’t know what to do if they saw him coming, they’d want to run and hide, or scuttle away, but Florrie was a capable woman. Us boys could shoot a deer or any kind of animal or bird, and chuck it down in front of her, and she’d know what to do. Wouldn’t turn a hair. Out with the knife, split open the guts. Just deal with things. She took care of us. She never married or had kids, she was the maiden aunt — but she watched out for us, she cared. That’s how she was, so she always had a kind word for Jack, no matter how he looked.  Just got on with it.

Did Jack do any odd jobs for the Leylands?

Of course. But many of those old swaggies were born cadgers, and in one sense they were all cadgers, but Russian Jack always pulled his weight. It's true, he got to be regarded as a 'gentleman swaggie', and he'd chop wood for the Leyland stove. It was a never ending job in those days, when each house had a wood-fired stove for cooking and baking and heating the water. Chopping — it had to be done. Jack would mostly chop wood for Florrie.

Aunt Florrie had some cherished memories about those days. She was very hospitable, and would give a feed to any of those homeless ones. And she liked to enquire into their lives — have a chat — make them feel welcome. She told me how she asked one swagman, 'How do you fill your evenings?'

He said, 'I lights a fire if I'm permitted, but must be careful to not set anything alight, like a haystack.'

Then Florrie said, 'And what do you do then?'

'I sits and thinks, but more often than not, I just sits.'

Of course that was a widespread and well-known saying back then, and on reflection I think it's the stage of life I've got to. I sits and thinks.

Of course some of those men were drunkards, who would do some odd jobs then spend the wages on grog. Some were wrecks, and would cause havoc, and stuff up the job. But some were okay, like Jack. To him it was 'a profession'.

Florrie told me about another one that she questioned. 'How are things with you?'

He said, 'I eats well, and I sleeps well, but if I sees a job of work, it puts me in a dither.