'You Should Get Paid.'

John, it was hard to get work during the ‘30s — any kind of work. Eventually things opened up, but to start with I linked up with Dad and did logging. You could say we worked as a bit of a team.

At one time we discovered that there was a local sawmill with a big appetite for logs. Cook’s Mill. Up Main Street. North end of town. Cook’s had built their mill alongside the Main Trunk railway line, and they had their own private railway siding, branching off into the mill.

Dad and I would harvest logs wherever we could, and drag and get them to any railway siding anywhere in the district, and they’d get shunted around until they ended up at Cook’s Mill. All done by rail. Big logs.

I heard that the native White Pine was popular, and ended up as butter boxes.

There was a bit of that, but it was mainly wishful thinking to a certain extent. See, the White Pine — Kaihikatea was the proper name — The ‘Kaik’ (as we called it) was mostly already gone, from clearing the swamps. There was very little left, but it had been there at one time, very dense, in the wet areas.

But there was lots of pine — Radiata — and there were big logs available. The wood-pulp industry didn’t exist back then, and Cook’s wanted big, solid, millable logs. The pulp industry can take all sorts of bent logs and branches and rubbish, but we’d have to hunt out the good stuff for Cook’s. Dad would fell it, and I’d drag it away with a team of horses.

He did. I think he worked on the breakdown bench — or the Pacific Saw.

The Pacific Saw rings a bell. He told me once how the blade from a  circular saw came off it’s shaft and went whizzing away into the distance. Could have killed someone. A huge blade. Like a flying saucer.

My memory is that Bob was told about that job by your father — so my Grandfather Leyland got a job for Grandfather Mechen.

I think that’s how it happened.

Someone told me, perhaps it was my mother, that it was your brother Bill who carried the message to Bob Mechen, telling him to rush up to Cook’s because  there was a job on offer. When Bill arrived at the Rolleston Street house he heard a piano playing, and asked who was playing so delightfully. That’s when he met my mother.

That could have been true. Of course, prior to that, your grandfather was employed by my father, and got a wage of sorts — whatever my Dad could afford. But the government passed a law saying that such-and-such was a minimum wage, and it was more than Bob Mechen was getting. So he demanded his rights. It’s the law. ‘Listen, Mick, you’ve got to pay me!’

Grandad Mechen was a staunch Labour Party man. A union man. Lived on the West Coast for a while. Miner’s strikes and all that. His brother was one of the striking miners in 1908.

They were staunch alright. But your Leyland grandfather was a staunch Capitalist. Believed in it. So he confronted your other grandfather with the facts as HE saw them. ‘Bob, I can’t afford to pay whatever I’m supposed to. So you either accept what I can afford, or you have to go.’

So that was that. Bob Mechen went. I think that’s what happened.

Dad and I kept on logging. It was a bit of money for us. But not much.

Did your father pay you? Did you get the stipulated wage?

No. Never. Just my keep. Dad never paid me.

One Christmas his sister, my good old Aunty Florrie, she got herself all agitated about it — all worked up — and she cornered Dad and told him plain, ‘Mick, you should pay that boy a wage!’

And Dad explained it to her, plain and simple. ‘We’ve got to get board when we’re away logging — sometimes in a farmer’s home, sometimes in a pub. So it all costs money.’

I didn’t have to concern myself with any of that cost. Dad squared it all up. As far as I was concerned I was happy to have a job, and I liked working with my father. I also liked travelling around, and staying in pubs or whatever.  I didn’t get agitated. For me it all evened out.

I got through, and after a while I got into delivery work. That paid a wage, and I got to drive all over the district.

Yes, it all evened out. 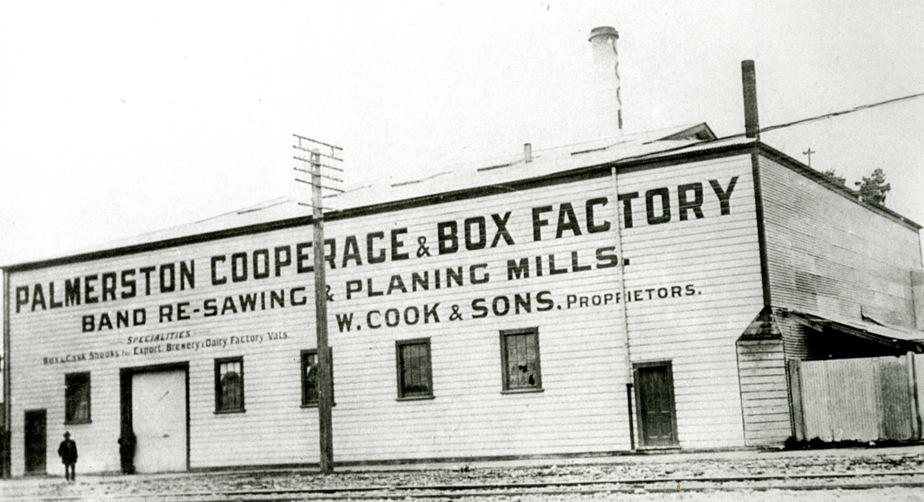 Cook’s mill in Main Street before the fire of 1930. c1920 – 1930. Peter and his father supplied by logs to the replacement mill built after the fire.. (This photograph is from the "Cook Family Papers" held by the Ian Matheson City Archives)