After you told me about how you took a stand against war during World War 2, and became a conscientious objector I …

Well, it was wartime, and I objected to it. It was nothing very emphatic, but it was on my mind, and the time came when I had to make a stand. I guess that’s when conscription occurred. There I was, a CONSCIENTIOUS OBJECTOR! My brothers signed up, but not me. It was a real stigma — Leyland, a traitor to the cause — a badie — a ‘conchie’, and some people got very animated about it.

I understand you had options — either be a non-combatant in the military, get assigned to an essential industry, or go into a detention camp.

I went off to make cheese for Mother England. I was sent. No option. Off you go! England must have New Zealand cheese to survive the German attacks. It was one of the many jobs I did in life. And it was hard work, working the cheese-presses by hand, no mechanisation.

I was surprised to discover that you weren’t the only Leyland who was a ‘conchie’. There was another in the family.

Who? I wasn’t alone then?

He objected about 15 years after you, when military training was compulsory. I found his record in the National Archives.

It was me — and I’d forgotten all about it! I was searching the National Archives for ‘Leylands’, and I stumbled across — myself! I must have registered soon after I left high-school. That’s when every young man had to spend some time each year doing compulsory military training.

Except those who objected. I guess it was the influence of the church. Lots of young evangelicals were opposed to training for war. I remember being a bit annoyed by Sister Thomas at the Apostolic Church. She talked me out of applying to the Air Force to be a fighter pilot. When I get pissed off I tend to get sulky, so I probably romped out and registered as a ‘conchie’. Can’t remember the details.

It might come to you. See, there are different ways our memory works. You might remember or recall something — bring it to mind — or recognize something when you see it or are reminded. Recalling is often harder to do, to do it off cold, but sometimes, when you get one idea, when you’re given a clue, a thread, things come to mind. I’ve just remembered what they call it. It’s the ‘association of ideas’. Linking things together. The human mind is like that. You mentioned ‘remembering and ‘the association of ideas’ came to my mind. It works.

I know that I can remember some things well, like every job I’ve ever had. I’ve polished borer-guns, pumped gas, dispensed bull semen in an artificial breeding centre etc. etc. etc.

Yes, we did whatever came to hand. We had to make some money. I was a taxi driver for a while in Palmerston North. There was a firm that got established in Palmerston, and the idea I got about them was that, after a while, the chief man, or one of the men in it who had some capital behind him, came up with the bright idea of buying a fleet of cars and getting drivers to use them as taxis. So these cars were part of the organisation, and you could be a driver without having the money to buy your own car. But later, after it all got going, he decided to sell the cars to the drivers — it was a bit of a speculation on his part, and the drivers, instead of being employees became owner-drivers, but, of course they had to commit to taking over the responsibility for the cars, so they were tied to the company.

This company had an office in town, in Broadway, and that was their booking office and their administration centre, so there came a time when I shifted from being a driver to being in the office. I’m not sure of the details as to why I did that, but it must have suited me at the time, or perhaps I didn’t want to get tied into a debt. See, here I was, objecting to what was expected.

People would phone in and order a taxi, and that’s where I settled, taking the orders and working in the office. ‘Good afternoon, this is Blue Band Taxis.’ That was my voice you’d hear, I took the orders.

My grandparents used Blue Band when we wanted a taxi, but we never got to hear your voice because we didn’t have a phone at home — couldn’t afford one. When we wanted a cab to take us to the railway station I’d be sent up to your office the day before to make a booking.

We got lots of bookings like that, from people without phones.

Did you do the dispatching, and radio the cabs with details of the orders?

I don’t recall those details, but there are some things I do know, and one is that I’ll have to talk to you later — I’ve got to go and have a leak.

I won’t stand in the way of that. 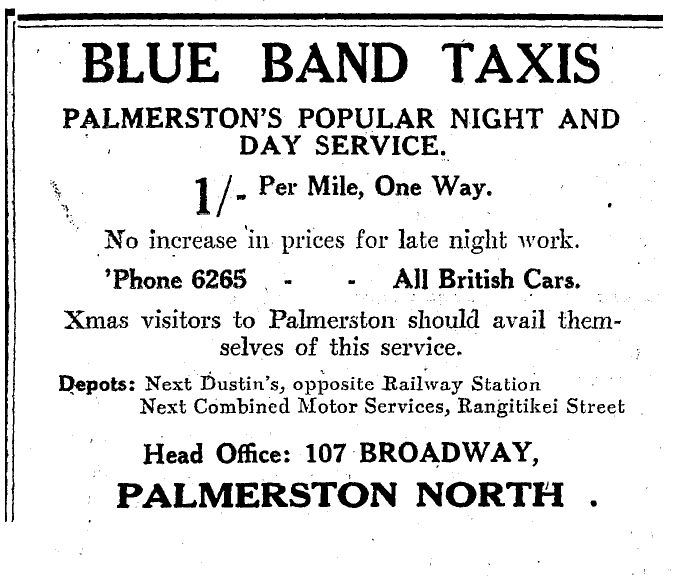