Hi, Peter. Did you receive the parcel I sent you?

I did. I got it! And the contents were very relevant and very good.

Did you prefer the chocolates or the Irish Moss jubes?

It’s impossible to decide. I’ve been very pleased to get them all. Good boy.

But which of the two kinds of Irish Moss jubes were best?

Both! Both of them were best! The soft ones are very tasty. The hard ones — they reminded me of those old-fashioned Blackballs. Do you remember them?

That sounds like you were brought up during the Great Depression.

We learned how to make things last. A lolly should last for hours.

The other day I mentioned your half-brother Bryan promised to type up some notes he’d made. I received them today.

Oh, that’s good. Is there new information in there?

Yes. For example, I didn’t know you were a ploughman! I found that …

Well, Dad had four or five draught horses. Big beasts. Work horses. We pulled logs with them. I was a teamster, you might say.

But somehow, somewhere along the way I got landed with using those horses to do ploughing. I not only remember getting involved, I remember it was really difficult — damned hard work, if fact. Not recommended.

You had to direct these horses across a field while the plough turned the sod over. It made a long shallow ditch, with a long ridge beside it. It was a curse of a job. One boot on the mound, one boot in the ditch. Lopsided, one up, one down, for hours on end. The aim was to make what they called a ‘straight furrow’. In fact, the farming magazine was called ‘The Straight Furrow’.

So I’d line up the team on some fence post or tree and clomp along, guiding the horses, but there was nothing easy about it.

There were people who made these ploughs, and there were several styles and sizes. They’d make them up according to the demand. If a farmer had plenty of horses they’d order a ‘double furrow’. If the farmer was really ambitious, and had lots of land and horses he might order a ‘triple furrow’. What I did was manage a double furrow. There were ‘singles’ for use with one or two horses, but the ‘double’ was a more efficient use of the ploughman’s time.

The ‘double’ needed four horses. That’s what I drove. And when you got to the end of a field you had to manage the horses to turn and start back again, but keeping the furrows neat and even.

We got in tow with some farmer-man, outside Palmerston North, on the fringes. And he was a businessman. For one or two years he ploughed up farmer’s land, with permission, of course — a sort of lease I expect — and he’d sow the land that we ploughed with oats and wheat and that sort of thing.

I was one of the mugs who did his ploughing! There were two or three of us — it was quite a big business — and we got paid a wage.

What made it so difficult was the need to go straight across — to keep the furrow straight — to keep it neat. We’d plough the whole area in a paddock — every inch, so to speak — so he got the biggest crop. He got the big money.

We got a wage — a few shillings a week.

It was a job I really hated, but you did what you could in those days — you did whatever came along. Sometimes you have to do a job you hate. 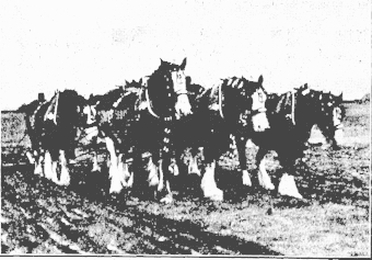