We Don’t Know How Lucky We Are

Would it bother him to talk?

Peter, I tried your ‘curry powder in the coffee’ trick.

I didn’t use enough the first time, so I upped the dose. BINGO! Great stuff.

I discovered that trick back in the Age of Steam so to speak, at the railway station. One of the advantages of travel you could say. Broadens your horizons.

The New Zealand Railways certainly promoted travel. The platforms were plastered with posters. Did you ever get the urge to go further afield?

No. I was a bit conservative, not interested in travel apart from going up and down the line a bit. Of course, in those times there was no air travel so it was slow and expensive to see the world, that’s why the war was so popular with some of the men-folk. It gave them a chance to go overseas and blow things up.

But looking back I was VERY conservative. VERY. But some of the older ones — my ancestors, they had a great urge to travel, but in their case it wasn’t for entertainment or to just to have a new experience, no, it was to escape, and make a new life. Take Old Phil’s dad for example, old Edward Leyland, he wasn’t content to just be a Pommie, stuck in the old Yorkshire ways. He wanted a change, an improvement on the old life. He had the urge to travel, to break away to New Zealand and make a new start.

After he’d been in New Zealand a while he wrote a letter to Ambler, his nephew, back in Yorkshire, asking him to retrieve the copy of a special book his father had owned. He made quite a fuss about it.

That would be interesting reading.

Give me a minute, I’ve got a transcript on my computer. … Here it is.

LETTER OF EDWARD LEYLAND (NZ) TO MR AMBLER LEYLAND (Yorkshire, GB.)
East Clive Napier - January 29th 1886
My dear Nephew,
I have a commission for you if you choose to try and execute it. Amoungst the books in my father’s house in Wade St when John Henry went into it, was a folio edition of “Cooks first voyage to New Zealand” illustrated, I should very much like to possess it and will give a reasonable price for it say up to ten pounds.  It is of no value to him and interests me. Will you see what you can do and if he has not got it he may know who has. Will you try a little diplomacy with him on my account, if successful make it up in a box, wrapped in a piece of blanket or wooden cloth and forward by any of the direct steamers to me

Well, John, ten pounds was a lot of money in those days. Old Phil told me his father was a highly educated man — an English Gent — but in spite of all his learning he was a fool when it came to business and money. One of Edward’s bad mistakes, according to his son Phil, was that, in spite of knowing absolutely nothing of farming, he went off quickly from Auckland to Great Barrier Island. Phil thought his dad was attracted by 100’s of acres of cheap land. Who knows?

I know about that. There were two motivations: to escape from Auckland, and to start the Tryphena Hotel.

Well, Old Phil said it was so isolated out there you were lucky to see a sailing boat in a month. Isolated by storms. Very primitive. They lived in a tent. Cooked under a tree. The family almost starved to death. If it hadn’t been for helpful Maori showing them how to survive on pipis and thistles they may have perished. And that’d have been the end of us! Edward lost his investment, and they moved on to the goldfields. Old Phil always referred to his father as ‘Father’, like, he’d say, ‘because of the total isolation Father had to do as best he could.’

Of course Yorkshire people are noted for their pig-headedness. So old Phil’s version of it was that his father was well-educated but very silly. He definitely wasn’t a ‘pioneer’, in fact he probably had some romantic notion that he was leaving Yorkshire for a coral island and some South Seas adventure. Breadfruit and bananas.

That would explain Edward’s interest in ‘Cook’s First Voyage to New Zealand’. Perhaps it had fired his interest, and he expected a idyllic land of milk and honey.

There were tough times, even in this new land.

Now a lot of us older folk went through the depression, the 1930s, and it affected how we look at things, it still does. But there was one comment from Old Phil, and he was looking even further back, as a real oldie, in his 90s, getting on a bit,  and one of his contentions was that he’d already lived through a previous great depression, and I got the impression he’d found the downturn of the 1880s worse than what we had in the 30s.

He would have been in his late 20s or early 30s during the 1880’s slump. He and his future wife were busy producing your uncles and aunts, as well as caring for the two or three she’d had by Mr Ramsay. Old Phil wasn’t as well set up as he was in the 1930s.

He certainly had his complaints about the older times. To him they weren’t ‘the good old days’, they were ‘the bad old days’ — and that saying of his was quoted in the local paper. He was trying to prove how bad times could be really be. He was saying that he’d seen other bad times. Worse in fact that what we thought was bad.

Peter, did he ever tell you that in 1866, during an earlier downturn, his father spent three months in Mt Eden jail for embezzling a pound?

Old Phil never spoke of that! One pound! That would have been a black mark in those days. Mouths to feed I expect. People will steal to feed their children.

I’ve seen and heard it all through my life — people saying times are bad, and they still say it. But it’s been worse before — much worse. Old Phil could make comparisons, he knew.

Reminds me of Fred Dagg’s song. ‘We Don’t Know How Lucky We Are.’ 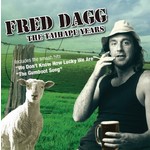