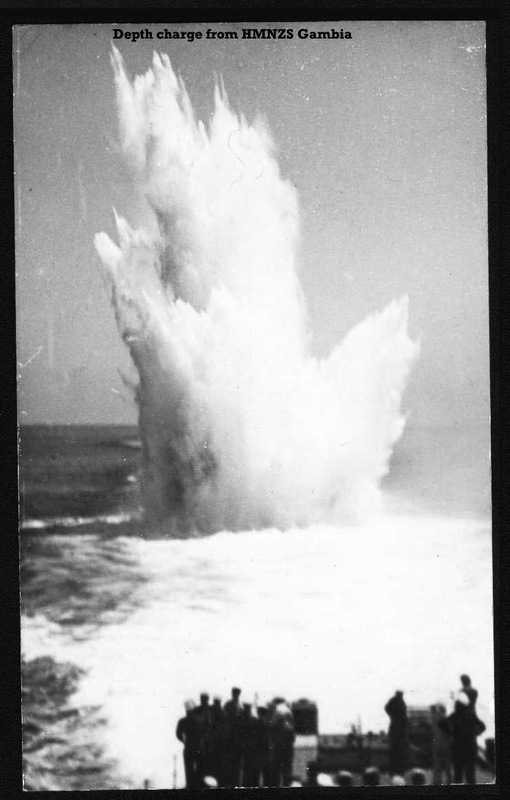 Peter, I’ve got permission from the New Zealand Navy Museum at Devonport to include a copy of one of their paintings into your book.

But they also had two other photos that made me smile.

Were they about my brother Fred’s boat, the Gambia?

They sure were, and they reminded me of ‘Fred the Dynamiter’ right away. One showed a column of water thrown up by a depth charge. The Gambia had dropped it in the Hauraki Gulf as an exercise. The second photo showed a lifeboat full of sailors collecting the stunned fish.

They weren’t slow when it came to making the most of things. I dare say a depth charge would be very handy when it came to fishing — very effective — just the thing to stun something for the frying pan. Explosives and fishing, it is done. It’s not uncommon.

Peter, this might seem an odd question, but do you recall the Just family in Palmerston North?

Most definitely. The name Just was a bit famous, but why do you ask?

In 1968, soon after you and Jean helped me buy John Bright’s Bonsai Nursery, I had dealings with Freddie Just, who had a plant nursery down the Esplanade end of Cook Street. Freddie loved spinning yarns about his father. Is there a river going into the sea at Tangimoana?

Yes. That’d be the Rangitikei River. There’s an outlet there, at the beach. And I can say that Tangimoana’s a fishing spot. Renowned by some— but actually it was nothing special in my opinion.  But the fishermen went there. They got a flounder or two, sometimes a bit more.

Of course there was a story about that, and it became well known because it let you know what to expect there. There was a young family man, a visitor, who was fishing away, minding his own business — but he was under the eye of one of the locals. Before much time had passed he had a bit of luck. He landed a fish — bigger than a flounder! Something much more substantial. Well, one of the locals — an elderly bloke he was with some experience of the area — he marched up to this visiting fisherman and told him off, and not with gentle words either, he really abused him. He was very upset at him.

‘Listen here,’ he said, ‘I’ve been fishing here for years and years, and I know what the fishing’s like here, and you — you come down here and catch something big in just a few minutes!’

So that’s what fishermen remembered when they thought of Tangimoana. A place to get severely abused.

Tangimoana. I remembered the right place then. That’s where Freddie’s dad took his explosives.

What did he want to do with explosives, eh? Tell me the story.

Fred’s father enjoyed fishing but disliked the way the Rangitikei river-mouth had organized itself. He took a truckload of nursery workers, with spades, wheelbarrows and sticks of dynamite down to the river-mouth and re-contoured the landscape by blowing it to smithereens.

The local council would have taken a dim view of that, but those old-timers just got in and did the job, whatever it took. Very practical.  Just solve the problem. There was a certain disregard for the authorities.

Fred's father always solved problems in a pragmatic way. On one occasion he got annoyed with some workers who weren’t ‘putting their backs into it’ when hoeing weeds. They were working with Dutch hoes and …

Dutch hoes? I know them. They have a flat blade, sharpened on both the front and back. You can cut a weed off below the soil with the push stroke, and get another when you pull back. Very effective.

That’s the one. So Old Man Just shortened the hoe handles to make certain his workers ‘put their backs into it’.

That’d do the trick. Make them bend their backs. People have all sorts of ideas about what needs to be done.

Did you ever try dynamiting fish?

Well, there are many ways to catch a fish, but we never went so far as to change the local landscape in that way.

Depth charges would be spectacular.

Yes, just the thing for stunning fish. Whatever works. Of course, we had out methods.

You must tell me — sometime …

One day, but there's something else come to mind.