Hi, Pete. I’ve got a pre-publication copy of article Tina White has written for the ‘Memory Lane’ column in Saturday's paper. Shall I read it to you?

It’ll be in the Manawatu Standard on the 19th. There’ll be two pictures with it, one of you captioned : A grand age: centenarian Peter Leyland, at a Wischnewsky family reunion — and one of me titled: Personal scribe: John David Leyland, Peter Leyland’s nephew.

Here’s Tina’s article:
Few people get the chance to publish their memoirs at the age of 100.

Even fewer add a sequel.

But Peter Leyland, 101, has done just that. His book of 58 racy Palmerston North recollections, Roaming Around In My Mind, was a highlight of the library and archives’ 2011 Local History Week, and sold out fast.

He has now finished his second collection of stories, via his nephew, compiler and self-described personal scribe, John David Leyland.

Mr Leyland, who recorded all of his uncle’s stories and transcribed them over several months, says the new collection will become available next Monday. This time however, because of Mr Peter Leyland’s fragile health, the occasion will be low-key, and online.

“I won’t be publishing the collection as a book this time,” John Leyland said this week, “but will be providing them in digital form, as a pdf file, and possibly as an e-book through Amazon… anyone who wishes can print their own copies or read the file on the computer.” The Palmerston North city library will have a copy.

He says this second round of tales, a true labour of love, was captured while Roaming Around was being compiled, printed and launched. “During the compilation of the new stories (as yet untitled) I was drawn more deeply into our conversations…Pete occasionally retold yarns I’d heard before. These retellings often included a deluge of quaint new expressions and extra information, and it was both a joy and a challenge to revisit our previous conversations and weave in new material. I saw some yarns grow before my eyes, complete with tangents, asides and a gush of synonyms.”

The memoirs are presented, as before, in a conversation format, with Peter Leyland’s words in plain text, and John Leyland’s in bold text. There is a comprehensive index.

Peter Leyland always called himself a “gasbag, windbag and chatterbox.”

But when John told his uncle that Roaming Around In My Mind was going into libraries including Waikato University and the National Library of New Zealand, Peter was amazed. “Me! My stories – and I only got as far as Standard Six at College Street School – left at the age of 13…”

However, a good yarn is always popular, as public reaction has shown.

Peter Leyland was born in Whanganui; later the family settled in College Street, Palmerston North. Peter joined the Palmerston North public library at the age of 10 (and eventually became its oldest continuing patron.)

Peter’s father, Ernest (Mick) Leyland, at the time a railways fireman, turned down the offer of a railway house in Milson.

“He made it clear you didn’t ever want to live too close to people you might have an argument with. He spelled it out: you don’t want to have them staring over the garden fence at you when you come home at the end of your shift.”

Peter’s grandfather, Old Phil, was long-lived, like his grandson. In 1951 the Manawatu Times featured a story about him titled: “City’s 98-year-old voter walks to polling booth,” adding that P.H. Leyland had steadfastly refused the offer of a lift. Phil’s constant long walks in the fresh air may have contributed to his longevity – he died at 103.

Peter Leyland’s vivid memory covers many topics in the story collection: his late wife, Myra Jean; fishing and hunting; experiences and encounters of all kinds.

“I remember when Palmerston North seemed more like a little township that went on to grow suburbs…And the shops got bigger and better, and I recall that when the mothers or aunts wanted an outing… they’d first go and do their shopping, carrying a basket with a loop handle with their arm through that handle – they all had them, and when they’d done the shopping they’d go into the tearooms for a rest and a cup of tea, proper tea, not the cheap stuff that someone called “posts and rails” because it had twigs in it, but fine quality tea. Roscos was popular and well known for their food…”

Where did Peter get his storytelling ability from? He suggests it may have come from his mother’s side of the family. In the chapter titled “It’s the way you tell it” he talks of his mother Elizabeth, member of a Halcombe-based Polish immigrant family, the Wischnowskys. He recalls suddenly realising she was an entertaining speaker and could tell colourful stories – she was the star of many Halcombe family gatherings. “We didn’t ever see that side of her at home…but she had the ability to impress a crowd.” Escaping from persecution in northern Europe, her Polish but German-speaking “tribe” – decent, honest and cheerful people – suffered during World War I when Palmerstonians behaved coldly toward anyone with a German accent.

From the Yorkshire side of the family, his grandfather Old Phil insisted on “accuracy, bare bones, just the facts” no colourful or embellished stories.

“As far as my memory allows, that side of me comes through too. I want to say it like it is. So this storytelling thing, it’s all to do with the way we are… I’m very much what the Leylands and the Wischnowskys put on to me, and into me…I used to think about it a lot.

Why are we the way we are? What makes us? And I’ve concluded that you inherit a big part of what you are.”

Monday January 21 is Peter Leyland’s 102nd birthday. Tongue in cheek, his message to his readers, according to son Phil, is: “it’s a mistake to grow old.”

Peter did grow old. But his stories never will.

So what did you think of that, Peter?

That's so good — and so true. I liked the last few sentences.

Shall I read them again?

'Monday January 21 is Peter Leyland’s 102nd birthday. Tongue in cheek, his message to his readers, according to son Phil, is: “it’s a mistake to grow old.”
Peter did grow old. But his stories never will.'

Be sure to thank that girl for doing such a good job, but there's one comment I could make. Even though I've often said, 'It's a mistake to get old', and I've been known to repeat it, it's not really my message. It's another quotation that I know — that I’ve picked up along the way — and I got it from my grandfather — from Old Phil — and as you know it was unusual for him to say anything humourous — he was dour, Yorkshire dour — and I can't ever remember him cracking a joke, but sometimes when he put that saying out there, when he said, 'it's a mistake to grow old', people might ask him, 'Why?' Old Phil's response was, 'because there's no future in it!' That was the nearest thing to humour I ever heard him say.

It sure does bring a smile.
Peter, I'm trying to decide on a title for your second collection. Any ideas?

That's your job, boy, but I recall one of the old publishers — Reed — A.H.Reed — and he was a prominent writer, back in the day, and also known as a great walker, like Old Phil. Reed made a name for himself, and wrote lots of books about his wanderings and footsteps around New Zealand, and there was one title — I didn't like at all, not one bit. I think it was something like 'Rambling Around In My Mind,'

That was supposed to be mine! I did 'Roaming Around In My Mind'!

You can't trust anyone! Sounds like blatant theft to me — but we need to get serious about a title for your next collection. We used your words for the first title. Any suggestions for ?

It's up to you this time, boy. It’s your turn to decide.

I've got one idea. This new collection builds your story total to 102 — although that number's in danger of being surpassed real soon — and it's your 102nd birthday in three days, and that's when I promised to have the files deposited in the Palmerston North Library. You could call it '102 NOT OUT'.

I can use the picture from the cover of 'Roaming'. We can doctor the lettering on your cap to read '102', rather than '100 NOT OUT'. That would fit. Can you imagine that on the front of the new collection? 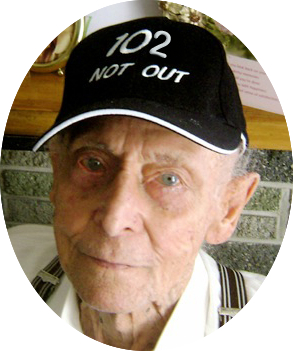 Peter Leyland died on the 20th January, 2013, 20 hours before his 102nd birthday.
Two days before his passing, Peter and I discussed choosing a title for this second collection.
With his birthday only a few days away, and the transcribed story-count standing at 102, Peter was happy to endorse the idea of calling it '102 NOT OUT'. Although ‘102 NOT OUT’ it is now not strictly correct, his son and I agreed that, because it was perhaps one of Peter's last decisions, and since there were 102 stories on record, we would go with Peter's final words on the subject.
‘That'll cover it.’