There Be Mice In Woodville

Do you know where your parents first meet?

Well, I think it might have been in Woodville. Yes, it probably happened in Woodville. Woodville comes to mind. Earlier on, even before I was born, that town was an important railway junction. One line went north to Waipawa and Napier, another headed off through the gorge to Palmerston North, and the third went down through the Wairarapa. We never had much to do with the Wairarapa line, our focus was up the line or on the Palmerston side.

From Woodville Mum and Dad went to Wanganui where Bill and I got born. Then we all came to Palmerston North, and I may have told you this, but Dad got offered a Railway house at Milson, but he turned it down flat.

Now one of the good things about my father was he took time to explain to us boys why things happened. He would relate things, and give reasons, and we were fortunate that he liked to do that. And with the house thing, he made it clear you didn’t ever want to live too close to people you might have an argument with. He spelled it out, ‘You don’t want to have them staring at over the garden fence at you when you came home at the end of your shift.’

It was good to get his advice but sometimes in life I’ve had to work things out for myself. You have to do that.

Now, somewhere along the way Dad made friends with some Woodville people — the Wilkinsons — perhaps that friendship went back to those earlier days — and he would send us off to their place for a holiday treat, a time away, during the school holidays. These Wilkinson people were pretty obliging to have us, as we boys were more or less strangers to all of them, but there they were, feeding us and giving us a bed. For us it was a real treat — a big adventure.

I remember one incident that happened there at Woodville, it’s stuck in my mind. The Wilkinsons had a spare room down under their house, a sort of basement. And in the room were some bunks, and we boys, we were down there, ‘sleeping below’ you might say. But the place was a bit neglected, there were mice in the house. And one day, while I was down in this basement, looking around as boys do, poking about, nosing around, I came across a couple of mice. They were just running around as mice do, darting about, so I reached out my hand real quick and grabbed one of them. The result was I got firmly bitten by it!

One thing you need to know about mice is that they’ve got very sharp teeth, incredibly sharp, as I discovered. Quite a handful. It sunk them into the skin right between my thumb and forefinger. A VICIOUS BITE!

Of course that’s an old-fashioned type of story, because it wasn’t uncommon to get bit back in those days. You could get tetanus — blood poisoning — it could be deadly serious. We heard of deaths. But, in spite of getting well nipped, I survived. Obviously, it seems like I’m a bit of a survivor.

So I’m talking to the man who survived The Woodville Mouse? 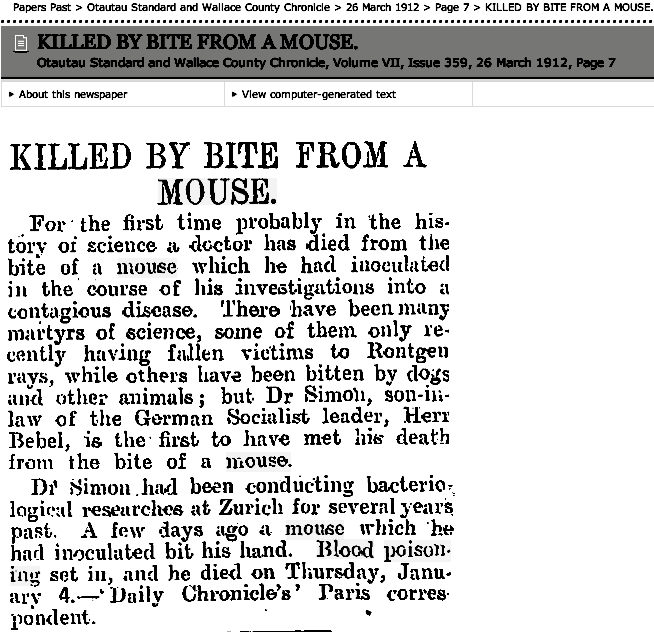 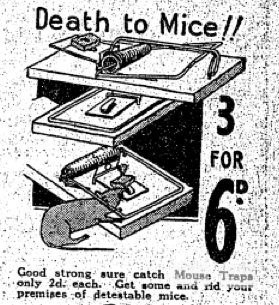