Peter, our chats inspired me to ferret through my family history papers. I found my father’s military service record from World War Two.

He signed two ‘Attestations’, giving details of his life, work and family. One was in 1940 for ‘Military Services’, another for the RNZAF. In one he described himself as a 'motor driver', and gave his employers as ‘Hodder and Tolley’, and ‘Abraham and Williams’. Who were they?

They were big produce firms — workshops — warehouses — sale yards. They bought and traded farm produce — grain and seed. They were the wheeler-dealers — supplying farmers with what they wanted, and trading what they produced. Bill drove all over the district helping to move goods.

He also listed his ‘Trade or Calling’ as ‘mail and paper runner’.

That was what he did before working for those produce companies. He had a small vehicle and he did what they called the Rural Delivery. He delivered the mail and the newspaper to the farmers.

There is one small tidbit that’s stuck in my mind. At the time when Bill was working as a runner, and we were both in the Church of Christ, one of the blokes I knew — a church member no less — he took me aside and had a word in my ear about the habits of his mail runner.

‘Peter, do you know what I’ve found out about the mail runner? Well he races along the country road with his bunch of rolled up newspapers, and if he doesn’t have to stop at the letterbox to put any mail in, he just tosses the paper out as he flies past. And if it’s been raining he always manages to get the paper into the largest and deepest puddle he can find.’

Would my Dad have done that, aimed for the puddle?

No, not on purpose. He’d be in a hurry, for sure — left hand on the steering wheel — right hand out the window ready to fling the rolled up newspaper, either across the front of the windscreen, or you might veer onto the right side of the road for the drop — but he’d put it where he aimed — he wouldn’t intentionally get it into a puddle. It was quite fun really. The papers were rolled up so they wouldn’t fly to bits.

I had a strange experience once when I was doing the run. I stepped in and did the run for him. That was when he had a nervous breakdown, before the divorce.

Sometimes on the round we’d get to have a passenger, perhaps a tourist who’d got sent along for the ride. They’d get to see the land and the farms. Sight-seeing — that sort of thing. Well one lady tourist, she was about 30, or even older, she came with me, and she spent the whole time — a couple of hours — asking me questions — non stop. Two hours solid, enquiring about the running costs, the routines, wanting to know how she — or anyone — could make some real hard cash out the job. She wasn’t interested in the countryside — not a jot — no way — she wanted to know ‘What would I have to do to make a good profit, not just pay the wages.’ I don’t know how she talked her way into getting the ride around, but all she wanted to know was ‘How do I click on, and make cash out of it.’

It was all a bit strange to me.

Did my father have other jobs before the war?

At one stage Bill worked for a friend of his. This chap started up a backyard business, down Linton Street. It grew into a big business. He started off with ‘Home Made Ice Cream’. Byers was his name — Byers Home Made Ice Cream. A big part of the affair was delivering it, and that’s where Bill came in, taking the stuff to shops and dealers.

In a refrigerated truck?

Goodness me, no. Not in those days. It was all done with ice. There was an ice factory in town, and they’d supply chunks of ice to homes, to shops, to factories — anyone who wanted to keep things cool. Bill had big bins, lined with ice, to take the ice cream around in.

You could say that most of Bill’s jobs had to do with wheels. Delivering things. 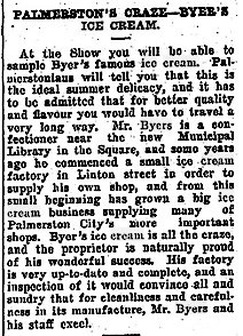