Peter, I found some notes I made in 1978. They mentioned your Uncle Sydney Leyland. He was another Leyland I never met, but it seems he was a mixed blessing.

If you start a way, way back with my Aunty Florrie’s opinion, then Syd was great. When we were youngsters there was no mistaking the fact that Syd was the favourite brother. Syd was tops. Syd was a good bloke. Syd was the Great White Hope. Florrie had high praise for our Uncle Sydney — she’d go on and on!  Syd was Wonder Boy. The Great Hero — he’d been off to the war. Syd was Father Christmas. In fact he was both Father Christmas AND HAPPY NEW YEAR! Florrie was genuine, but she didn’t know the full story. Or she chose to turn a blind eye.

Syd was the youngest of the family, and Dad was only a year older, so these two younger ones were always at each other. But Florrie, she was always there — she tied all the Leylands together. Oil on the water.

Later on I discovered Syd wasn’t all he was cracked up to be. I’ve even heard him referred to as ‘a bit of a mongrel’. The rest of the family had a different slant. But me, personally, I formed my own negative opinion. Syd had a lot of faults for a ‘Golden Boy’, in spite of the fact he did whatever he could to magnify his own prestige.

Syd had joined the Post Office for a job as a linesman — a repair man — and they kitted him out with a motorcycle and a sidecar. He filled the sidecar up with tools and wire and what-have-you, and even managed to carry a ladder around on it. He’d get sent out like a messenger, to find and fix problems with the lines.

I remember something that happened when I was working for my father. At some stage Dad got involved in a family squabble and I witnessed what was going on, and made up my own mind about it all.

I said to Dad, ‘If Uncle Syd had used his brains a bit, he’d have realised he’d made a mistake. He was wrong. If he’d worked things out properly he’d have seen he was on the wrong track.’

And my father said to me, ‘Peter, this squabble is CRAZY! Okay, boy, it's true that Syd has made a big mistake. You might say he’s been foolish but actually I say he’s not just ‘foolish’, he’s a DAMN FOOL’.

No ‘ifs’ or ‘buts’. A DAMN FOOL! My father was very emphatic about it. No argument. ‘Peter, you have to realise Syd can be like that — that’s what he can do.’

Syd always had his nose out of joint. For instance, Dad’s education created a lifelong family squabble. My Dad was dux, and got a scholarship. Syd’s attitude was ‘Why didn’t I get an education?’ Severe jealousy.

When Dad was marrying his second wife, Marion Wallace, Dad invited Syd to the wedding. Syd announced he wasn’t going to go because the travel and another present would be too expensive. He’d already given Dad a present for his first marriage and wasn’t going to be 'done' a second time.

Your half-brother John described Syd as ‘snug with his bucks’.

That’d be Syd. Very snug when it came to money. Years later, many years it was, Dad held out the hand of friendship to Syd, but got refused. Syd got to be a staunch Labour party man, a working man, a linesman. But Dad was a National Party Capitalist. Oil and water.

Now what happened was that when Syd got into his old age and retired, he looked around for a cheap house property, and he got a place, way out of town, up through the gorge, past Ashhurst and Woodville, up Dannevirke way. When you retire you want somewhere to live and call your own, and Syd got this property, prompted by the desire for something cheap.

And he got a little car too — all done quite cheaply — 10 horsepower, a Ford — a Ford Prefect they called it. And once a week Syd, and his wife Ethel, would do an outing down to Palmerston to visit sister Florrie. And Aunty Florrie was keen on getting this visit. It was part of their retirement ritual.

But Syd had this reputation — as I told you, he was even called ‘a bit of a mongrel’. And I agreed, because of what I privately knew about some things he’d tried on.

And after Old Phil died, Sydney drove into town to help sort out his father's affairs. He charged the estate petrol money!

And after his sister Florrie died, he sent a bill for petrol and meals to the Public Trust for cleaning out her house.

The memories of that time, the tail end of her life, are very bad. Florrie was living on her own, and we’d phone her every day — once a day, to see if she was okay.  We lived out of town a bit, and there came a time when we phoned, and phoned, and got no answer. Sometimes Florrie went up to visit Hawkes Bay, and she’d usually let us know what she was doing. So we thought she’d gone away and forgotten to tell us.

But we went to check, and when we arrived, we were met there by Uncle Syd. He’d come into town for his weekly visit, and when he got to the College Street house — the house his sister Florrie had inherited from Old Phil — he discovered Florrie’d had a bad stroke. She died as a result. The house was a mess, no doubt about it, but Syd exaggerated it — reported how it was a ‘whole mess inside’, and claimed he ‘had to face up to it’. He’d cleaned up — ‘a horrible mess’. He made a big deal of it — but she was his sister, HIS SISTER, and you have to pitch in at a time like that and just cope with it.

In actual fact I did much of the clearing out after Florrie died — just got on with it. Mind you, Uncle Syd took all the credit. He was the victim. Poor old Syd.

There was some stuff that I knew Florrie cherished. I think my boy Philip found out something interesting about it. You could ask him. There’s supposed to be a copy of the Magna Carta in a Hawkes Bay museum. It was given to the family — sent over from Yorkshire by a Mary Leyland. Strangely, Aunt Florrie had a copy of it made, and put up on the wall at College Street. She must have liked it.

But getting back to Syd — he always wanted to place some blame on someone, to offload the burden so he would shine out. In this case he didn’t know who to blame, so he picked on Dad and me.

All we heard was how ‘Poor old Syd had to do it.’ And into the bargain he also got off with Florrie’s silver, the stuff that was destined for Ron Leyland. That was some silver cutlery that had come down in the family. Mary Leyland had sent it across from Yorkshire. Ron got it back.

The Public Trustee’s opinion was, ‘That Syd Leyland, he's one of the toughest nuts I’ve met’.

There were other things Syd did that earned him the reputation of ‘Mongrel’. Perhaps every family has one.

There was talk that his wife, Ethel, wouldn’t go out to afternoon tea.

But this blaming people for things, it can be a family failing. On the whole, there’s usually no point in blame. 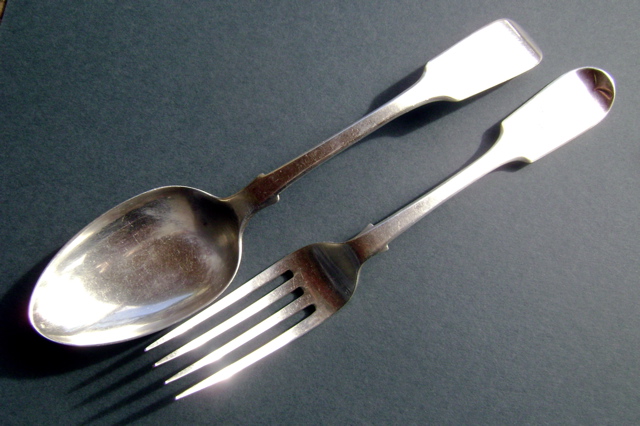