Peter, what was your father working at in the 1920s?

Dad stopped working for the railways, as a fireman, probably at the end of the First World War. I found out later he left because he’d seen someone commit suicide by jumping onto the tracks in front of his engine. He never told us about it — ever — but that’s what I heard. My half-brother Bryan overheard Dad telling someone. It was all very hush-hush. I’m not surprised at that sort of thing happening. And it did occur.

In Palmerston North the railway used to run right through the centre of town, right through the Square and down the centre of the main street. That’s perhaps why they called it ‘Main Street’. And you had to have your wits about you when the train came though. The train had right of way. If the train was going through, it was GOING THROUGH! No stopping it. We heard of one woman who decided to go through at the same time as the train. She decided to fall deliberately in front of the engine. But Dad wasn’t on that one.

In those days the old engines — steam engines they were — had a thing on the front called a cowcatcher. It was designed to skim along, just an inch above the line, and deflect straying animals, to throw them off, because the Railway had right of way. If something got in the way, it was hard luck. Move or die.

He was a great storyteller and he loved to talk — lots of stories. At one stage he worked on the Rimutuka line, up over the ranges — very steep.  They had to use the Fell engines. The engines of those trains worked on three rails, not two, and the engine had special winding wheels that worked on the middle rail.

After the railways, one of the things he did was work for a Harvester Company, in Rangitiki Street. He didn’t have any qualifications that I know of, but he could do the job. He was a mechanic, you could say. Self taught. At that stage the dairy industry was really getting into milking machines. Ridd was one of the big brands, better than most. There were others too. But it was quite a job in those days to get it all working. Quite a job! You needed an expert.

That was the beginning of what we think of as the modern dairy industry. Milking machines, instead of hand milking! Dad was one of the people who travelled around the customers, putting in foundations for sheds, then building them and installing the machines. He was based in Palmerston North of course, but he had to travel. He travelled with a big toolbox — well, it was a big leather bag actually, and he fixed it onto the back of his motorbike. He didn’t have a truck — he had this motorbike. A Thor. The Thor was almost like a cheaper imitation of the Harley Davidson. Yes, THE MIGHTY THOR. Big. Clumsy. Twin cylinder. 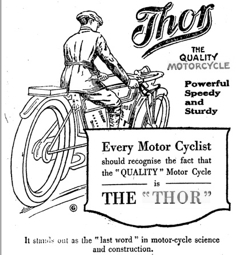 And Dad would ride on out and teach the farmers about how to work the new-fangled milking machines. I don’t know the exact dates for sure. I was just a kid, and like most kids I wasn’t all that interested in the details of what my father did, I just wanted his stories. I wanted to be entertained.

What I do remember is, when he’d come home after being away for a week he had good stories. When he was away, setting up the machines, he was boarded by the local farmer. He got a bed, and got fed. And he did his work, and got morning and afternoon tea as well. Usually, for those in-between teas they’d have scones, and usually the scones were good, very good, because every farmer’s wife knew how to whip up a batch. It’s what they did back then.

But, on one occasion Dad came home with this story of how he sat down for his ‘cuppa’, and the farmer’s wife produced this plate — A BIG PLATE — of scones, and the husband and Dad got stuck into them.

And the husband said, sort of casual and offhand, he said, “Well dear, these scones, they’re not as light as usual.’

And Dad told us, when he came home and was telling us the story, that he had one Dickens of a job to stop himself from laughing. It took him all his power to stifle his laughter.

‘Boys, it wouldn’t have been polite to laugh. But … ‘Not as light as usual!!!’ I’m telling you that to get into those scones we needed a sledgehammer and a chisel.’