Hi, Yvonne, is Peter up for a chat today?

YVONNE: He sure is! He’s just had a good feed, and his eyes are not giving him so much trouble. I’ll mute the TV and give him the phone.

PETER: (taking the phone — surprised) … Where am I?

You don’t say!  And how are you, you cheeky young man?

I’m fine, but the world’s in a bit of a mess, what with earthquakes, tsunami, nuclear meltdowns … and all the trouble in Libya.

Libya. All the talk of war is frightening. War — it spreads out — it grows. I’ve seen it many times, from the time of the Great War.

Do you remember much about the First World War?

Well, I do have a few memories. I was three when it started, and seven when it  finished.

We had a man back then who was very clever with the pen and pencil. That man could draw. It was a nasty situation, the First World War, and this man recorded it. He was what we’d call a cartoonist, and the newspapers latched onto his work. And when the war was going really badly —and I was only four or five years old at the time — and it was all going on in France — one year was real bad. You see, they had this really wet season, and this cartoonist recorded it. I saw it all later. His work was famous. He wasn’t trying to be funny, but he wanted to show things so people could understand how desperate it was.

Well, the countryside in France was half drowned, and there were these soldiers there, and this man, Bruce Ben’s father, the artist, he did the drawings. He was a commentator. And the soldiers were being flooded out. And this man came up with a cartoon, spelling out something that was happening, but with a drawing.

There was this middle-aged soldier –– in uniform –– and a younger soldier, also in uniform, and they were trying to hide away from the firing, but the problem was, where could you go to be safe?

And in this drawing, there were these two, standing in what seemed like a swamp. Maybe there were bits of vegetation around, I don’t remember exactly, and the old man comments to the other, ‘If you can find a better hole – go for it.’

BAIRNSFATHER. He was actually a very clever illustrator.

Oh! I thought Bruce Ben was a mate of yours and his father was an illustrator. And Bairnsfather’s cartoon made an impression on you?

I still remember it. Over ninety years ago. ‘If you can find a better hole, go for it!’ 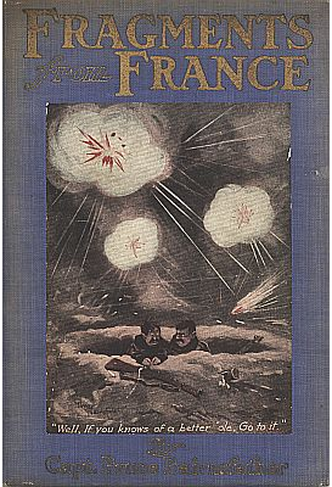