Did you follow your father’s footsteps and get into motor bikes?

We all got into that sort of thing.

I had two or three bikes in my time. I tried out the Indian. They called them Red Indians, because that was their trademark colour. But I didn’t like it much. I had a few mates who were into bikes, and I was able to try all sorts. There was a lot of talk about Red Indians. I was offered a ride on one. Twin cylinders, but not as much noise as a BSA. The Indian I tried was, in my opinion, a gutless wonder.

Of course you could tart them up. Like Burt Munro did — they made a film about him — the World’s Fastest Indian. For him, speed was the thing. But the original Indian was gutless. Burt sorted it out. Tinkered with it.

I also tried a Harley-Davidson. But I settled for BSAs. BSA — Birmingham Small Arms — they made weapons, ammo, machine guns, and motorbikes — were contractors to the British Government.

Now with a BSA you could tell by the sound of the motor it was doing something. That motor had a ‘THUMP THUMP THUMP’ that meant business. They were plain, simple, useful and good. Nothing fancy. I liked that. And your dad Bill, he had a bike. But he liked fancy.

My mother told me that when she was courting him, she thought he was a bit of a swash-buckler. He took her away on his motor-bike, up the Whanganui River Road, his 303 rifle slung over his back, and her holding on for dear life. Bill shot a deer that day. Wow! She was impressed. They went back to Palmy with the dead deer draped over the gas tank. Her most vivid memory was, ‘I remember my shoes — black patent leather, all shining and reflecting as we sped along!’ The skin ended up as a rug. She loved that bike ride.

Well, we all did things like that in those days. Motorbikes — rifles.

That bike Bill had was a Phelon and Moore. Phelon and Moore were supposed to produce ‘The Perfect Motorcycle’ — P&M. Phelon was Irish, but the bike was made in Yorkshire, just a few miles down the road, I’m told, from where Old Phil was born. The model of Bill’s bike was a Panther 100. I don’t remember the colour.

The Panther had one cylinder, and the way it was mounted made the bike distinctive. It stood out. The motor was on an angle, inclined, sloped — not up and down like all the others. And that made it different. It had all the style in the world. Rakish. It had the looks but it also had the SOUND. It revved really slowly, but it had loads of power.

Now your father, when it came to motorbikes or anything, he wanted something that suited him from a visual point of view. The Panther 100 definitely had it. Bill got what he wanted. Something stylish — that had the looks. There was no hesitation with him.

The rest of us, what we wanted was PRACTICAL — something that worked — that went proper — but Bill, he wanted style.

You also mentioned deer-hunting. Yes, we did things like that too. We all knew that if we went up the Whanganui River we’d find deer up there — mainly Fallow deer — but there were different breeds. They’d all been imported at some time, and they were all over the country, but Whanganui was renowned for Fallow. It became a popular thing for young men to go stalking.

Was there a particular knack to stalking deer?

There was one young man I knew, and I suspect he was boasting — as they do — the young ones — and he was letting me have his opinion.

‘Peter, this stalking idea is a waste of time. A complete waste! I just go and sit and call them, and they come to me. I don’t need to tramp around to find them!’

People did a lot of that. An old cow horn did the trick if you had the knack and used it the right way. At certain times of the year the deer would respond. And this bloke, he had a good collection of deer trophies to prove it.

What you do is this. You learn the sounds to make, and you stroll off into the bush, and find a nice quiet spot, and take your seat. Then, if it’s the right season, the mating season, and you make the right kind of calls, IT WORKS!

Someone else told me — it might have been Dad — yes, I believe it was — he said he decided one time to give this deer-calling lark a try. So he took off into the bush and gave it a go. Then, all of a sudden, on the track, he spots a deer coming towards him. So he ducked behind a tree trunk and lo and behold, this deer walks right past him! What a shock! He didn’t know what to do. It was so close. So he decides to grab it. It was a shock alright, for both of them! When he pounced on the deer it got full of life. Four feet in the air at one time! Jumping and bucking. It wanted to tear him in to pieces it did.

You see, he’d gone unprepared. No gun. Just fooling around.

Oh dear, I am rambling on. We were talking about motorbikes, weren’t we?

Was Bill on the Phelon and Moore when he had his accident?

Yes, he was on the Panther. And while he had a different mind to me about the kind of bike he wanted — he liked flashy — we were both very sensible and careful when it came to riding. You didn’t want to damage your pride and joy.

He was riding down Rangitikei Street — down the left hand side — and going fairly slow — and this bloke came out of a driveway — between some shops — he came with a bit of a rush — hit Bill side-on with his car. A big collision. Bill’s bike was hit at right-angles. Broke Bill’s leg. He was in a plaster cast. It was pretty bad. I think there were multiple fractures of his hip. Ended up in hospital for three weeks. It was 1936 I think, before he got married in ‘37.

Did the accident have a bearing on Dad’s mental condition a few years later?

There was talk that the accident was behind his problems, but that idea developed later — in retrospect. There was no evidence at the time of head injuries, and Bill didn’t complain of them, not that I remember. But he was pretty knocked about all the same.

Kathi detected what looked like a scar down his forehead, over his right eye. It was in a photo of Dad and me when I was a few months old — probably late 1938, two years after his accident. Another photo, around 1950, also seemed to show a faint scar.

I don’t recall that. If he’d had one I’d have seen it, and I think I should have remembered it.

The hospital doesn’t have his medical records from 1936, so I’ll never know.

I do know that Bill was in and out of hospital with his leg and hip injuries. They took a long time to clear up. It was pretty bad. He was shaken by it all.

There was also the theory, and there might be some truth in the idea that Bill suffered emotional damage as a child — there was a lot of tension between our parents. Mum was nervy and our father was — shall we say — VERY strong minded and dogmatic. But I thought we all coped with life pretty well.

I recall Bill got some insurance from the accident, a couple of hundred pound — or maybe 250 — and he put that into a car. A Ford 8. Then about a year later he sold it and got a Flying Standard 9. A bit of Hire Purchase involved on that one. That’d be the one in the photo. Then he sold the Standard and got an Austin 7. It was cheaper. And that’s when he himself started burning out.

Those cars were used for the mail and paper run. Milson and Bunnythorpe, I think. Not too sure if I’ve got all that correct. 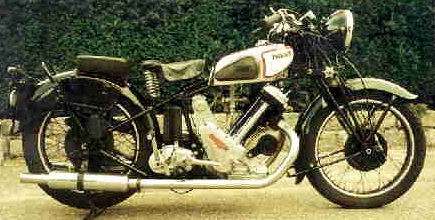 The Phelon and Moore Panther. 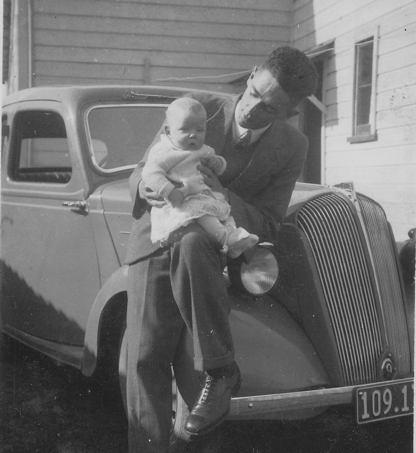 Bill (Peter's brother) with his son John 'The Scribe', and the Flying Standard 9.