Peter, I found an old photo of the overbridge I used to pose on as a kid — the one over the railway yards in Palmerston North. My friends and I used adopt heroic stances when steam engines went underneath. The smoke and steam shot up through the floorboards and made us feel like Supermen, appearing out of a cloud. SHAZAM! But, in spite of all that excitement I never got the urge to work for the railways.

Of course, at one stage that’s who my father worked for. Many people worked on the Railways. It was such a big operation.

My mum’s family were railway people. Her father worked in the goods shed, brother Tom was a shunter, brother Clem a station master and administrator.

Well, Dad was a fireman.

It was well known that you could join up with the Railways as a young fellow. It was a system that existed in New Zealand for years. The first step was to make an official application, and the most basic entry qualification was the Standard 6 Proficiency Certificate. That was part of our compulsory education system at the time. I got that exam, and so did you dad. Yes, Bill and I had what you needed — a minimum. But our father was overqualified for the Railways. He’d got a scholarship, and was dux of the school, but he must have decided to make his start with the engineering and mechanical side of things — as a fireman. Up in the cab of the engine there were two seats, one on either side. The right hand one was for the driver, a fairly qualified bloke with a First Class Certificate and he was the senior man. But Dad went for the engine side of things.

There were lots of different jobs in the railways. Shunting. Workshops. All sorts of careers, and some were interesting. As a matter of fact even the wheels were fascinating, particularly if you liked knowing how things worked. Every round, steel wheel needed a flange to keep it on the track, to guide it along so it wouldn’t just run off, and this outer flange was a steel band that was put on as a separate fitting. It was heated up to expand the metal. Red hot. Then it was positioned on the main wheel and shrunk on to make it tight. That was the way it was done. But sometimes that band, the flange, might crack or loosen and that would spell danger, in case it failed when the train was moving at speed. So one of the jobs on the Railways was that of the wheel tapper. They’d give the bloke a small hammer, a metal mallet, and it was on the end of a long handle so the wheel-tapper didn’t have to bend way down if he was working from the passenger platform in a station. And all the trains had their wheels tapped regularly. Goods trains, the Express, mixed goods, every train that came into Palmerston North got its wheels tapped. It was part of the teamwork.

But, anyway, the controls were on the right hand side. That’s the side where the driver always sat, looking for the signals. Now to stop any mishaps, any head-on crashes the authorities organised what they called ‘The Tablet System’. There was a tablet, and if you had it in your possession you could take the train from A to B. It gave the driver the RIGHT TO TRAVEL. It was a very good system and it safeguarded the trains. A train couldn’t travel a section of track without having the tablet, so this tablet would go up and down the line. Of course there were signals and messages as well. In fact the first message systems involved a simple wire along the track, and the signals were first done with Morse Code, until the telephone and radio took over.

Now on the left hand side of the cab there was the second seat, and there were always two people in the cab. As well as the driver there was the engineer, or fireman. And he managed the boiler by stoking the fire and controlling the water and steam. Behind the engine there was a huge water tank and a big bin for the coal, and while the fireman was stoking he couldn’t be watching, but when things were going well he’d take a breather and be a lookout on the left side of the train — an auxiliary lookout, a second pair of eyes.

Both these men sat in a sort of bay-window that gave them a good view, and the glass was there, not just to keep the weather out, but to keep the smoke out of their eyes. Sometimes you’d get a spark or some grit and cinders flying back at you. 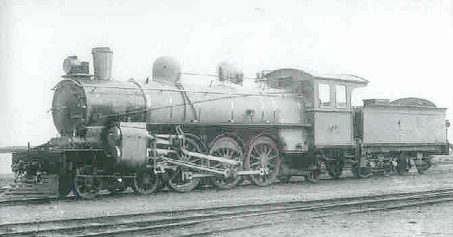 If something was amiss and they needed to give a warning they could pull the cord and operate the whistle. The steamtrain whistle was a memorable sound. No moving parts. There was this resonant chamber, and the flow of steam into the whistle was regulated by a pull-cord or a lever. So you could apply what was called ‘proportionate action’ and this could give some degeree of expression to the sound. Different operators had different expressions, and dad may have had his sound, and the sound was very loud and would carry for miles and miles.

We had another man in the family, my cousin Arty — Arthur Leyland — and he was a very good bus driver. Uncle Fred’s boy. A good bloke. And I have a memory that some woman ended it all under Arty’s bus. I don’t know if it was the 33-seater he took us all to Grandma Leyland’s funeral in 1928 — probably not — that was too long before the accident.

Anyway, the buses were all strictly timetabled, and there’d be comments if the bus was late, because people could usually rely on it — set your watch by the bus. Everyone got to know what time the bus came through — to the minute. And Arty Leyland was a noted driver, Very good. Excellent in fact. Always on time.

Anyway, this woman — she did it. Now I don’t know if this woman picked Arty out in particular, or if she knew him, or how intent she was on doing it. The way I heard it was that it wasn’t an accident, that she was waiting. Anyway, the incident occurred, and Arty hit her, fair and square. Mangled her to pieces. Such a shock. Unexpected. Arty never drove a bus again after that.

What did he do after that happened?

Well, the people at Newmans, the bus company people, the crowd that employed him, they had a few brains, and they knew that Arty was a bright chap, a capable man, so they took him off driving and put him into the office. He became an administrator, but he never drove a bus again. They understood how he felt about it.

Trains and buses can be deadly, and sometimes by accident or intent the outcome can change people’s lives. I’ve often wondered what our lives might have been like if that woman hadn’t thrown herself under the wheels of Dad’s steam engine, or how Arty’s life was different after that other woman was killed by his bus.

In Dad’s case he might not have become a carrier, or a logger, and so I may not have worked for him, and Old Phil may have never got into the cartage business. Life can change in unexpected ways. Events have unintended consequences. 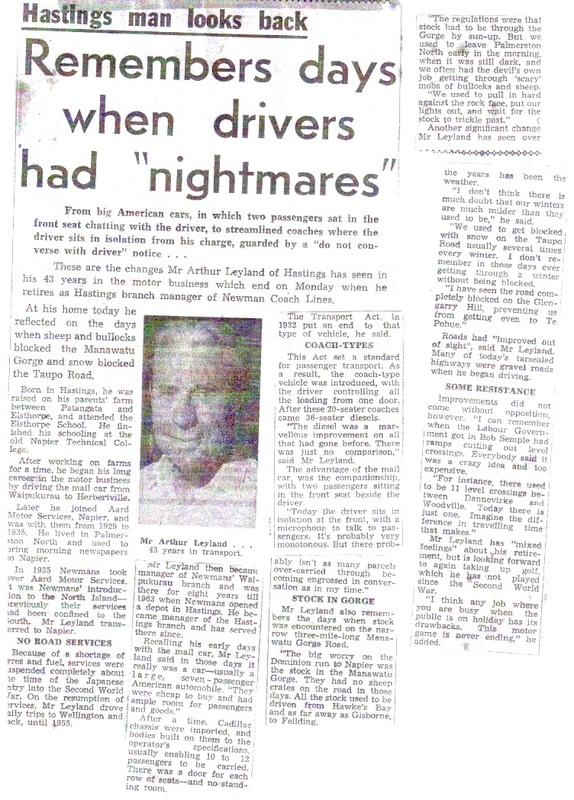 Peter's father was fireman on this type of train passing through The Square, Palmerston North. (Photo PN Library archives)