Hello, Peter. Did you get the liquorice and chocolates I mailed to you?

I’m not sure, I might have. My memory’s gone off a bit. Sometimes I can’t even remember what I ate or what happened this morning.

But how’s the book coming along?

You remember ‘The Book’?

Oh yes, some things stick in the mind. I find it all a bit amusing, and I’m pleased to see the Library is taking it seriously. The whole thing is beyond me, but here we are, right in the middle of it all. And I’ve got to ask myself, ‘Who’s to blame?’

YOU ARE! You’re the gasbag — they’re your stories — your memories.

Memories. As I’ve said before, I entertain myself at night with them. Often it takes ages for me to get to sleep — lying there, trying to sleep — then on come all the memories. They fill in the time — that’s what they do — fill in the time until I fall asleep. Very useful. But, how are you doing, boy?

I’m fine, just sipping a cup of tea as we talk.

Of course, tea making has a long history. It goes a way back. Get the teapot — china of course and properly made for the job — with a spout, handle, sieve inside to stop the leaves pouring out. Toss in the tea leaves — as often as not they’d be Earl Grey in our house — and pour over the boiling water. But now-days — it’s the teabag! It’s taken over. Chuck one in the cup and away you go. Not like the old days.

I’ve got a photo of you and my dad ‘boiling the billy’. Must be early ‘30s, before you guys were married. 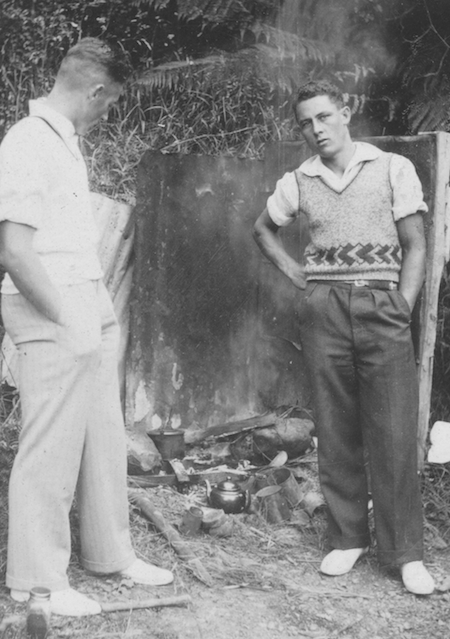 Billy tea was the same thing as teapot tea, but when we went camping, or out hunting, or enjoying the outdoor life, we’d first use some dry chips and leaves to get a fire going. Then we’d hang the billy over it. You could even use an old tin can with a homemade wire handle. Just bring the water to the boil then toss in the leaves. Let it brew, but watch out you don’t smoke it.

Billy tea gets ‘smoked’ if you leave the boiling water exposed to the fire and smoke. It gets tainted if uncovered for any length of time. You didn’t want that, so you must keep the lid on — everyone knew that — everyone did that.

Of course there were a couple of interesting things about billy tea. One thing that comes to mind was that some of the womenfolk even PREFERRED billy tea. They thought it was the best. It had a thing about it. To be enjoyed.

And then there was this Maori bloke — a funny man — who changed his name when he got into comedy. Billy T. James. I’ve often thought that name. I think it might well have been a play on words. He’d have known about brewing billy tea for sure, and he was pretty smart, and it could have been a link back to the past. Billy T was a great entertainer. Tongue in cheek. Billy Tea. Billy T.

Does that Peter Leyland chap compare well to Barry Crump?

I don’t know about that!! But I was roaming around mentally a while back, thinking about our old stories, and that bloke Barry Crump came to mind. The ‘Man From The Bush’. A Good Keen Man. The famous story-teller. Well — he passed himself off as a very ordinary bloke, sort of pretending to be ignorant, and he told his stories very off-hand and casual. Soon everyone was talking about him, and buying his books. Eventually I discovered that it was a bit of a fable. He came, or so I’m told, from an educated family, so his posturing was a bit of a con-job. See, he was a real entertainer and he knew how to tell a yarn. He was quite smart about it all. He knew how to work up a good story.

Do you remember Harvey, my American cactus-growing friend? I sent him to visit you once.

Yes. We saw him in Marriner Street. A big lump of a man.

He may describe himself a little differently, but he once said to me, ‘My daddy told me there weren’t no story invented what couldn’t be improved in the tellin’.’

Crump could do that. But me, well I’ve always just told it like it was. I’m not a Crump or Billy T. I don’t think I was cut out to be an entertainer.

But I do have 100 years of memories and stories.

Perhaps that gives you an edge?