A Most Versatile Magazine 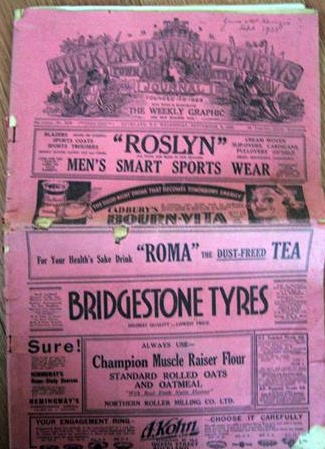 Hello, boy. And how are you?

I’m trying to shake off the dreaded lurgy. Perhaps I’ve caught your bronchitis over the phone.

It’s a bad problem, particularly in bed at night. You can’t breathe, you can’t sleep, you end up feeling all sorry for yourself, particularly if the cold gets into you.

The cold doesn’t bother me. I fill two hot-water bottles, put them in my bed with pillows over them — gentle warmth all night.

Well, boy, if it works for you, you can’t do better than that. If it works, IT WORKS!

And they’re still warm in the morning, so …

Well, of course that puts me in mind of Old Phil, my grandfather. As you know the winter nights can get pretty cold around Palmerston North, what with the frosts, hard frosts, mid winter, very, very cold.

There was one particular winter, when I was young, and I decided I’d had enough of it, a guts full, so I mentioned it to Grandad. I complained about the cold. Old Phil listened to me, and he took it all in, and he thought about it, and he asked me, ‘Do you have any magazines lying around?

Was that when Old Phil came to live with you in College Street — mid 1920s?

Yes, it possibly was. And it turned out that by the time he got to live with us, there was a stack of magazines in our house. In those days we had The Auckland Weekly News, and very good it was too. Very popular. It had a pinkish cover — a sort of reddish pink — and inside there were glossy pages. It was fairly expensive, but you only had to lay out the money for it once a week, six pence or nine pence, so we’d get it, and read it, and save them up. They cost a bit too much to toss away, not like the local newspaper, The Weekly News was more of an investment.

I remember it — bigger than your average magazine — and the glossy paper was for the centre pages. The regular newsprint paper was …

Yes, yes, yes, that’s it. That’s the one. That glossy section was for photos. Good quality coated paper it was. Strong, stout paper. So when Old Phil asked if I could put my hand on some magazines I told him we had this whole stack of the Auckland Weekly News. A pile of them – been saving them for ages. They folded well.

Old Phil said to me, ‘Well, there’s you answer — your answer to the cold.’

‘Take your mattress off the wire-wove,’ he said. ‘Put down a layer of those magazines — a good thick layer, don’t stint yourself, then put your mattress back on the bed and spread another layer on top. If you do that you’ll be insulated from the cold.’

So I did it, and what do you know, IT WORKED! I tried it. IT WORKS! As a matter of fact I got quite hot. Too hot. See, your body heat tries to escape, especially on a hard, frosty night. No matter how many blankets you pile on top, heat can escape out from under you. You’ve got to be insulated below. I’ve proved it. The proof of the pudding, as they say.

I’ve seen hobos in the movies — sleeping under newspapers.

Well, of course those hobos, at least in my day — those ‘swaggies’ as we called them — swagmen — they’d prefer to search out a haystack. Like old Russian Jack. They’d walk the roads during the day, cadging a feed or doing the odd job, but always on the lookout for a nice warm haystack.

But there was another thing to remember — to bear in mind. In those days there was a lot of commerce done that relied on sacks. You’d have sacks of spuds, and sacks of wheat, sacks of barley and sacks of coal. Sacks, sacks, always sacks of something or other, and it was well known that a few empty sacks were as good as a blanket.

So what with haystacks and barley sacks and the Auckland Weekly News you could live like a king. LIVE LIKE A KING! And the proof was there, ALL AROUND YOU. It bally well worked.

Peter, when I was a kid living at 19 Dahlia Street, we had a less exciting use for the Weekly News. It was our backup when we ran out pages from the Manawatu Evening Standard. My mum’s dad, Bob Mechen, banged a nail into the toilet wall, and we stabbed a wad of newsprint onto it. Get the picture?

Indeed I do. That was common practice in those times – and during the war years when supplies were scarce and rationed. People would cut up newspaper and put it in the toilet, ready to hand. Some people actually took a bit of pride in it and cut it neatly with scissors, or they’d fold the pages and slit them with a knife. They’d even punch a hole in the corner and thread a string through their stack of paper, and hang the lot off a brass cup hook. Nice and fancy. But some families just tore it up with strong hands. Ripped it. Common practice. That’s what we did.

Well, Peter, it was that ‘common practice’ that reminded me there were TWO qualities of paper in The Weekly News.

Yes, the photo section was a more rigid, coated paper. Good for looking at. Glossy.

Glossy was not good for sticking on the nail. Most unsatisfactory.

That’s why a daily newspaper like the Standard was generally preferred. The photo section of the Auckland Weekly was to be avoided.

But in general my parents saved that magazine up — folded and stacked — so people could take one up and browse through them on cold nights, around the fire, or spread them on the table to pass the time. The Weekly News had a long life. It was both reference material and entertainment. Something to start a conversation.

There was another benefit. The cut up pieces on the toilet nail were a puzzle. I had a lot of fun sitting there, trying to put the news or adverts back together. A challenge to the seated mind.

That was a common practice too. Trying to make sense of it all. A jigsaw of sorts. Whatever works. The Auckland Weekly News. Versatile.

I heard it was also used as wallpaper.

Old houses in those days were often lined with planks. Those were the days before we had sheets of wallboard. Gaps would open up between the planks as the timber dried out, and in would come the draught. What to do? Paper over the cracks. And, if the budget was stretched what better paper than the good strong central pages of the Auckland Weekly News.