Hi, Peter. I did some research about carbide bicycle lamps, and…

Yes. They were common, and not only for bicycles. Before cars got fitted out with electrical generators and lights, it was sometimes the case that they’d have a carbide lamp or two installed on the front. The contraption for generating the gas would be fixed onto what we called the ‘running board’, which was like a step outside the car doors.

I’ve seen running boards on old cars, with people standing on them, hanging on while the car was moving.

It was quite a substantial platform — and just the place to attach the carbide generator. The system was basically the same as for any carbide lamp. You had a container for the carbide, and above it was a water pot, and you could start the whole reaction going by dripping the water onto the carbide, and the interaction of the two would release the gas — acetylene gas. It would burn with a very bright light.

The carbide was something you’d buy, and it would come in a granular form, not big chunks — granules, and of course, the water was free.

I found a news article that might interest you. Evening Post. April 28, 1927. You’d have been about 16. Perhaps around the time of your Chater-Lea bike and its carbide lamp.

Read what it said. 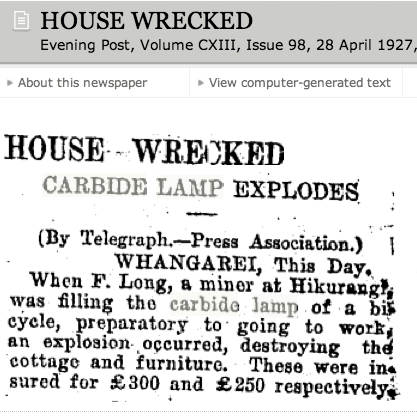 Pete, that report reminds me of the exploded house you saw in Stanway Road, except this carbide story seems farfetched. I can understand the power of Gelignite, but how could a simple, little, carbide lamp explode and destroy a whole house?

I don’t know how. It seems strange to me too. Maybe there was some pressure involved, and a big buildup of gas.

Could the gas pressure turn a carbide lamp into a hand grenade? They’re roughly the same size.

There’s a lot of explosive material in a Mill’s Bomb. Now I’ve also heard of houses going up because of explosions of coal gas, but for that to happen you need a fair amount of gas and plenty of air to make it work. And most of those explosions were not all that bad. Sure, some houses have exploded but, as far as I recall, there weren’t many people killed.

I wonder how the Hikurangi miner failed notice if there was gas leaking into the house. Is acetylene gas odourless?

Not at all. It’s stinky stuff. And so was the coal gas we used in houses and for street lighting in the early days. They both had a smell. You’d notice if there was a leak. You’d be warned — alerted.

Perhaps the miner contrived to blow his place up for the insurance money. But if the explosion was serious enough to destroy both his house AND furniture you’d imagine Mr Long would be long gone himself.

It’s a puzzle. How could he survive? Perhaps it’s a case of poor reporting.

See, some things are not exactly common practice, like having people blow up their house, but a good explosion usually generates some interest and excitement. It tends to capture the attention. I suspect that the Stanway Road incident laid a bit of a foundation for my brother Fred, it could have prompted him to sign up a few years later for the war.

We all heard about Cowdrey’s house going up — big news — it was talked about quite often — and there were other events like it that came along and caught the ear. And of course Dad and other farmers were always using jelly to sort out tree stumps. It was not at all uncommon In Palmerston in those days to hear a big BOOM somewhere in the distance.

And you’d wonder if it was a stump or a house?

Now some branches of the military were highly trained to blow up enemy bridges and railways and some such, or even to modify the charge to do a smallish job, something precise like blow a hole in a wall or something. And the idea wasn’t at all foreign to us as boys, and some took a fancy to doing it as a service to the country, like my brother Fred. A good excuse. The whole war effort, the Second World War that is, was the chance for a bit of mischief.