I Came Rollin' On In

Uncle Peter, I was appalled to read how dangerous your pea rifle was. Listen to this, from the Evening Post.

So what do you think of that?

Be that as it may, our Dad encouraged us to shoot, but he was very sensible. He spent a lot of time making us do drills. We only had one pea-rifle between us, so we had to learn to share it, and handle it correctly. Years later, as we grew up and when we got jobs and left school behind, we saved our wages and got guns of our own. .303s were as common as mud in those days. Ex-army. Lee-Enfields.  The powers-that-be almost gave them away. After the First World War they had a big surplus stock, and wanted to dispose of them. You only had to ask and you’d get one. There was very little registration as I recall. All of us had a .303. But, as kids, it was the good old pea rifle.

There was a rifle range, in some back street of Palmerston North, I can't recall the exact street, but it was a place you could visit at night. It was fairly close to the town centre. There was an inclined floor for you to lie on, called 'the mound'. The targets were all lit up with lights, bright as day. The place was run by a rifle club — it may have been called the Linton Rifle Club, and Dad would take us boys there. It was a bit of an outing for us, but Dad also liked to shoot, so he took us along. He paid all the fees of course, because we were only schoolboys. We had no money. The proprietors were very strict, it was a business for them –– no nonsense. So that's where we’d go, and practise. That was one place where we learned to shoot.

And then there were the A&P shows. They always had shooting galleries. And there were sometimes one or two galleries around town. We'd pay a fee, and have our shots, and if we were good enough, we'd win a prize.

As well as all that there was the shooting we did at school. We actually did a lot of that at school, and had Army Parade Days. There was a rifle range at the high school. We had uniforms, and did drills, and all that carry-on.

One thing that amazed me a great deal was the so-called 'uniform' they made us wear. It was a sort of semi-military affair, and the part I remember was the woollen socks that came with it. They had a leg, but NO REAL FOOT! There was a sort of strap, a cloth tape affair, at the bottom, where the toe was missing, and when you put them on this tape was under your foot, and it held the sock down. I hated them!

But we had lots of opportunity to shoot. Your father got quite good at it.

How did Bill get to be such a good marksman? Did he do extra practise?

He was a bit younger than me. I was born in 1911, he was 1912. Our younger brother, Fred, he was later again. As you see, we were brought up with a gun in our hands. But your father, well, he had a marked ability in all sorts of things. If something appealed to him, no matter what it was, he would set his mind to doing it, or fixing it, or being it, whatever it was. He'd utterly concentrate. He had the knack to be really focused. Very able.

There was one incident I remember. A rifle range had been set up, down by the Manawatu River. The contestants fired from the city-side of the river, and shot across at targets on the other side where there was a bank, a semi-cliff of sorts, called Pork Chop Hill, or was it Pork Pie Hill? It was some name with ‘Pork’ in it. Yes! It was Pork Chop Hill — just over the river.

On one occasion there was a competition going on, and my brother Bill was in it. We were still young fellows at the time, but it was all strictly controlled and safe.

Well, as the day wore on I thought to myself, Peter, why not go down to the range and see how things are going on. So I hopped on my bike that afternoon, and pedalled on down. The organisers had set up some tents, in case of rain I guess, and these officials were all quite serious people. Well, I came rollin’ on in, and as I rolled up to the tents one of these solemn officials at the command tent stopped me and greeted me.

I asked him, 'How‘s my brother doing?'

'You have a brother in the competition?'

‘Oh, Leyland is it? Well, he's winning every damn thing we put up! Everything!'

So here was my brother, out-shooting everyone, and basically he was only a schoolboy! He was concentrating on getting everything he could out of it. That's what he was like.

Of course, after a bit more practise he went on to be the New Zealand Army Cadet Champion in 1930. He didn’t have much money to get to the competition, but they sorted it out, they gave him a railway pass, a warrant they called it. He went down and stayed the night there. Got a bed and a feed. When he came home he brought in the championship belts. Three of them. We had them in the old house in College Street for a year. Quite a sight.

There was even talk of them sending Bill to England — to Bisley — where all the crack shots from the Empire competed. He wanted to get right to the top, but what with the cost, and the slump, it never happened.

I gave you my photo of Bill, with his belts. I was very attached to it because it indicated to me the potential my brother had. He was a bit famous — for a little while. It took me a while to part with it — it meant a lot to me — but he was your father — so I gave it to you. 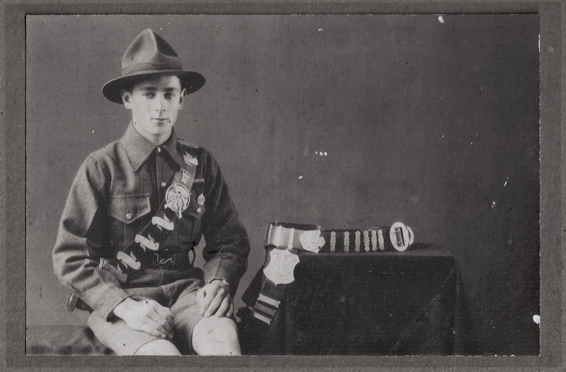