Hi, Peter. How are you tonight? I’ve been following your progress and you’ve had a rough time.

Oh, I’m much better. Much improved. The pills must be taking effect. But I’m still a bit wheezy — bronchitis — had it for years — it flares up now and then. Of course, being 100 may have something to do with it.

You still sound a bit rattly. I phoned last night but decided against talking to you. If you don’t mind me saying it, you sounded like your father’s Fell engine wheezing up the Rimutuka Incline! You sound much better today, but what say I do most of the talking, and you do the listening?

I can listen, but as you know I’m better at talking. A bit of a windbag, you might say. A chatterbox of sorts. Quite good at it.

Down to business then.

I got a packet of family history documents from your cousin Ethel’s girl, Ngaire. There was one gem that immediately caught my eye. It was a newspaper cutting, about another 100-year-old — your grandfather, Old Phil.  I’ll read it to you … 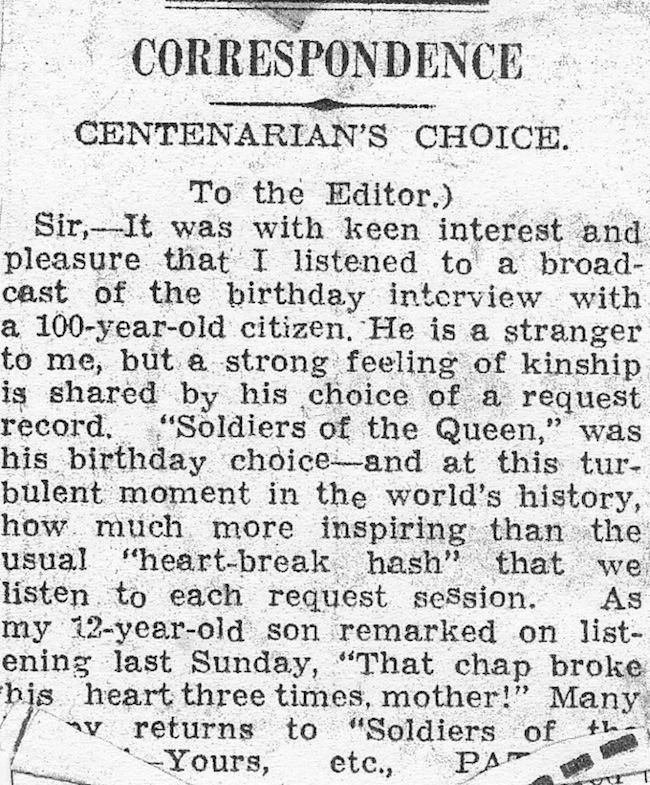 It was signed by Patricia Reeves. What do you think broke Old Phil’s heart three times?

I can only guess. Perhaps they were the three big wars my granddad lived through. And he saw the suffering. The Boer War, where his son Alfred went.  The Great War – 1914-18, where his younger son Sydney went, but Alfred defaulted. And World War 2, when he finally picked up a rifle himself and joined the Home Guard, to defend us against a Japanese invasion.

That makes sense. Three heart-breaking wars. Maybe that was it.

I found the words and tune of his request on the internet, on YouTube. Do you recall ‘Soldiers of the Queen’?

Oh no! You want me to try and sing it!

That’s as good as I can sing it.

That’s good enough. I know it. Yes, it’s one of the patriotic songs we heard a lot on the radio. People would walk around singing it. A war-time thing. To boost up things, like when troops were leaving. It was a heart-breaking time for many.

It does put me in mind of Old Phil. He was more or less famous in the country during World War 2 — and later, after it was over. He made a bit of a brag about it. ‘I was New Zealand’s oldest Home Guardsman,’ he’d say. He was 88 when it ended. Very popular he was. D Company. Many of his wartime mates would come to his birthdays. And that fact got printed in the papers on occasions. ‘New Zealand’s oldest Home Guardsman.’

So Old Phil enjoyed a bit of bragging?

Oh yes, but more than that, it got to be a bit of a boast for all the family. We’d all pitch in, something to talk about. Cousin Betty said Old Phil swam the Manawatu River in full Army kit! I don’t know about that. Might have been a bit of a stretch.