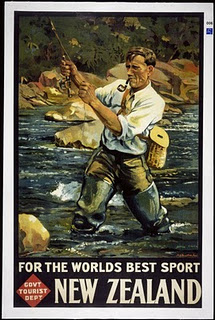 I saw an old Railway poster that featured a guy fishing in a stream. Not a ‘bottly’ in sight. Did you boys ever bother to fish legally, or was it always done with carbide bombs, gelignite and pea rifles?

I had a go at legal fishing, and it quite took my fancy. Your father and I got to try catching fish in the old English way. It was common practice, and we said to ourselves, if it’s good enough for the English to use that method, it’s good for us lads in the colonies.

So you put your bottle-bomb days behind you?

Yes. It got to be frowned on by the authorities in spite of being quite an effective method but we found that if you got a proper fly fishing rod, then that was an okay method too. But we had a problem with that system, we were very poor, and a good rod cost money, real serious money. Everything with us was make-do. For instance, we discovered it was fashionable to use a special type of bamboo rod, and we found out that the makers of these rods would get, not just a single stem of bamboo, but a collection of split stems — thinner canes that were split down from one bigger stem. Their method was to lay three or more of these split canes side by side then re-join them using a good glue. It was a type of lamination process — all tested out — and was a big improvement over the single stem as nature grew it, but it was very expensive.

So us boys got some dried out bamboo stems and we split them ourselves, then we glued several lengths together side by side and clamped tight, and made our own fly fishing rods.

The whole ‘fly-fishing’ thing was going on around us. For instance there was one report about a man who became quite famous. He had a business, a restaurant, and one of the things he discovered, one piece of his learning was, that by combining his restaurant business with the supply of some good fishing equipment he could get a reputation for being better than the other restaurants — an edge, so to speak. He contended that if he got ordinary bamboo and split it and made the rods himself he was onto something superior. So he specialized in promoting himself as having something more suited to the local conditions. He was a local chap, and we saw what he did, and we used his ideas. We had no qualms about that.

What about the flies, and the lines?

There was overseas stuff available in the local sports-goods stores. There was no question about the lines— you had to buy them because the line itself was better if it came from America. We couldn’t make our lines, but we did make our own flies. We tried that. See, sometimes the overseas stuff was quite good, but the local ones imitated what the fish actually went for. The locals studied that.

Making flies wasn’t so easy, it was fine work but we made the best of what was available. It was common for people back then to make their own flies, but later in life when I made more of a hobby of it — a holiday event — I’d go into some famous shop in Taupo and buy from there. Lake Taupo was known for big fish — a reputation for trout — world famous — and it was also known that the local Kiwi-made flies were the best. Local knowledge.

Now one of the flies — a local affair with a fancy name — was very effective, and the thing that distinguished it from others was that it was made from the feathers of a native bird. It was a well known bird at the time, and used to hang around at the water’s edge, the swampy areas, and stand in the water, it was what you call a wader, and pointed it’s beak up to the sky. I’ve seen it many times, but can’t bring the name to mind.

Now this bird didn’t ever seem to do much except stand in the water. I never saw one catch anything, but they must have made a living at it. I wish I could remember the name. It always seemed to have its eyes up to the heavens, but it must have been watching, waiting, very patient. Oh! What on earth was the name?

STILT! That’s it! Now the feather’s of that bird were so highly prized for making fishing lures that it got to be in danger of extinction, of being wiped out by fly-makers. The government put a ban on it, and actually passed a law against hunting the stilt. So it got to the stage you couldn’t make those good flies any more.

Did you do most of your fly-fishing at Taupo?

When we were lads we fished nearer to home, but when I got into my working years at the Longburn Dairy Company, they’d give us annual holidays and we’d go up to Lake Taupo.

Jean hated it, and didn’t want to go , but we took the family up on occasions. We had a go, but she soon had her fill of it and said, ‘You can go and do it.’ She actually left us in Taupo and went back home twice. She wasn’t into using bad language but I imagine that if she’d been inclined that way she’d had said something very colourful. So off she went. And, of course I was a bit peeved. No-one to look after the kids, and I had to do the cooking, and it cut into the fishing time.

It’s a pity she didn’t have something to do that gave her as much enjoyment as fishing gave you.

Yes, it was a pity that she wasn’t into her painting then. The scenery meant nothing to her at that time. It was a boring holiday. It’s a pity she didn’t paint.

It might have given her some joy. Eventually she got to love it, and enjoy all sorts of views. There was one bloke who liked fishing in the evening — as the sun was setting — and he said to me, ‘Peter, you can stand out there in the lake and look up at those mountains, and see the reflecting sunset, and you’re there, in the water, immersed in nature, and you thank God for the experience.’ See, you can get different kinds of waders to wear for when you are fishing, short ones, trouser length, or ones that cover most of your body so you can get further into the lake. And that man liked to get right out and enjoy the experience.

But that’s how things go. That’s what different people are like. 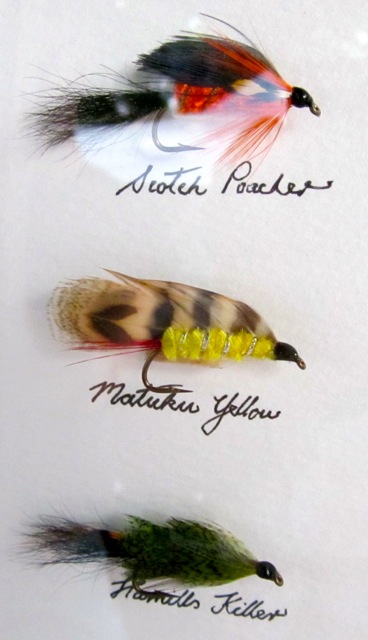