Zig-zag Trenches.
Why would anyone dig World War One trenches in Palmerston North — 10,000 miles from the front-line?

Good evening, Peter. Do you have any memories of the First World War? You were about the same age during the First as I was during the Second.

Do you remember the Second? What about your memories?

Yes. When I was six, my grandfather, Bob Mechen, dug a ditch in the backyard. He piled the clay up around the sides and warned me, ‘Don’t go near there, in case you slip in.’

I remember, some time later, standing beside Granddad, looking down into that ditch. By then it had gotten half full of ice-cold rainwater and there was a drowned hedgehog floating in it. I asked, ‘What’s the hole for?’

‘It’s a slit-trench, to hide in from the Jap’ bombers.’

I developed an instant fear and hatred of Japanese. What sort of people would make a young boy of six jump into cold water with a dead hedgehog!

I can understand that! Of course, my childhood memories were World War 1. Us kids would hear the pipe band every morning without fail, and we’d run to the gate. We weren’t allowed out past the gate, but we’d stand there and watch the soldiers marching past, doing their training march the full length of College Street and back again. Several miles it was.

The army took over the Awapuni Racecourse at the far end of College Street. Tents everywhere. They set up camp in the centre of the racecourse.

Everyone was in a war fear. Nobody knew exactly what was happening. I was at school during the day. There were preparations for war everywhere. I remember lots of trenches being dug. I saw them.

Trenches? In Palmerston North? But there was no danger of a German attack!

Yes, trenches! But these were not ordinary trenches — not those long, straight trenches. These ones had lots of short bits, all connected together, with sharp corners. Zig-zags you might say. I understood that the zig-zag design was so a German machine-gun couldn’t set up at one end and clean the whole trench out –– they couldn’t shoot our boys down en masse. The trench making was very strict. You can’t machine-gun around corners, can you?

I guess not, Uncle Peter. But trenches in Palmerston North? 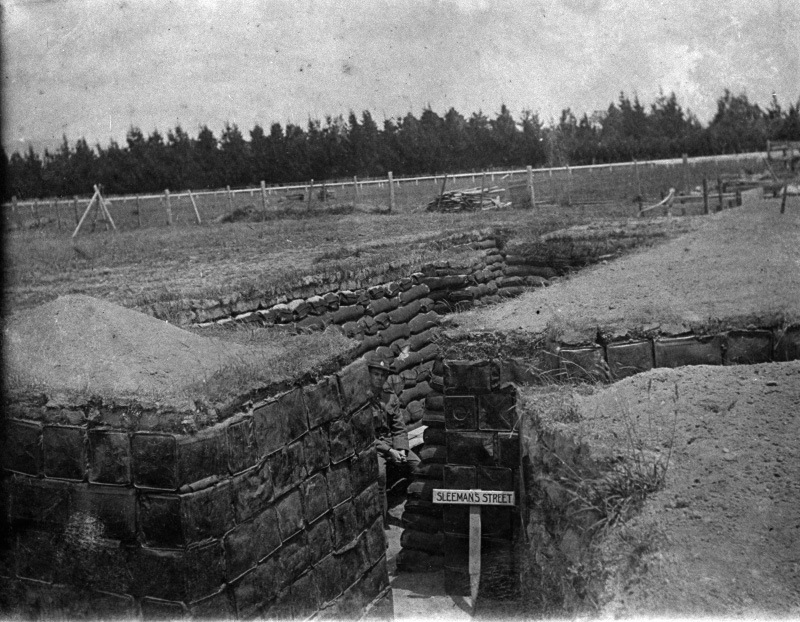 Zig-zag trenches, dug at Awapuni Racecourse, Palmerston North, New Zealand 1917 by a field hospital unit as part of their training, so they would know what to do when they arrived on the battlefield in France. Photo from the Ian Matheson Archives. Palmerston North City Library