Why not tell me about Halcombe — where your mother was raised. Did you know the district very well?

Oh yes. Even when I was in my mid-twenties I worked around the area. There’s one memory I have of when I was driving a bread-delivery van. I didn’t organise the orders, but I drove around the district doing deliveries. The farmers had large letterboxes out by their front gate — out near the road — and I’d put one or two loaves into our customer’s boxes, depending on what they’d ordered.

There were two runs. One was the hill country run, up the back of Feilding. The other was the coastal run, Himitangi and out Tangimoana way.

These deliveries were done on alternate days. 6 days a week. One day I’d do the Feilding back country run, the next day down the coastal.

There’s no bread-delivery round like that now-days, but back then the farmers would place a regular order, a permanent order for whatever they wanted.

There were these two brothers who were competing with each other. Each had a bakery. They were old-fashioned bakers. I think it was the brother George that I worked for — I can’t remember the other one’s name — but whatever it was, there was no doubt about it — he was ‘the enemy’.

Anyway, I drove George’s van, and at the end of each inland run, coming down from the hills, I’d turn the van into Stanway Road. It was a long downhill run, all the way into Halcombe. I’d just take my foot off the pedal and let her roll on down. At the start of the run you could see all the way down the road, with the farm houses dotted along each side.

On the day in question I spotted a farmhouse that was a bit back from the road. I knew the house, but I never met the farmer. I didn’t deliver their bread, it wasn’t part of my run, but I drove past there three days a week at the tailend of my working day.

On this day the house looked different. It was blown to bits. The back was gone. Walls blown out. Bits of all four walls flat on the ground.

You could see what had happened — you could figure it out. The force of an explosion had lifted the roof off the kitchen area, and the whole incident had all happened at speed. While the roof was up in the air the walls blew out, flattened outwards, then the roof came back down, but there were no walls left to hold it up so it ended up on the ground where the floor had been.

When I got to hear the details, I found out that the farmer had been planning to blow up some stumps on his farm. It’s what they did back then, in the 30s, they used dynamite or gelignite to solve the stump problem. The farming practice was to cut down unwanted scrub and trees and let them lie around, maybe for a year, to dry right out. When they were dry it was time for the big burn. They’d torch the lot. You couldn’t see the sun for smoke. When all the small stuff, the twigs and branches and leaves, were cleared by the fire, they’d still have the stumps to deal with, and these needed to go, to make room for pasture or crops. So you’d slip a stick of dynamite in underneath and blow the whole shebang to bits. One stick would not only clear away the stump, it would disintegrate it. Turn it into firewood. Chunks everywhere. But the explosive is said to be unstable in the cold weather — downright dangerous if very cold — so warming it up was considered the thing to do. So this farmer, in Stanway Road, he’d put his gelignite in the oven. He’d used the stove to warm it up — and he’d got a bit careless and the stove got a bit on the hot side.

How did he survive?

Don’t know how, but he did. The Police got involved. Very sad. It was in the papers. Cowdrey was his name. Court case.

Some people weren’t so lucky. On another occasion there was a contractor bloke down at Opiki — that whole area had been a big swamp in those days, and they wanted to clear and drain it for farmland. Lots of dynamite needed to blow the stumps. One bloke was travelling through with a truck loaded with dynamite, and the whole load exploded. That was the end of him. He’d blown a big hole in the swamp. Tricky stuff to handle.  There were quite a few incidents like that

Shall I see what I can find out in the old newspapers?

Let me know. Mail it down. I enjoy those old papers. 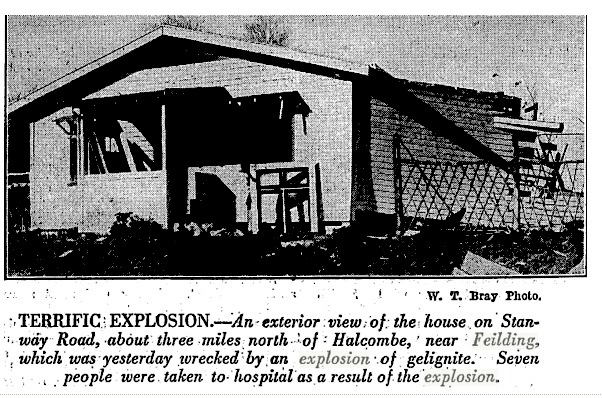