Leyland and Larsen.
Horse, carts, and the ways things were.

Indeed he was, but it didn’t last long. After the milking machines Dad got into cartage and then later he got into logging. He liked the idea of business. At some stage I think he sold his interest in the College Street house to his father, Old Phil. One way or another he got some money and started a cartage business.

‘Leyland and Larsen’ they called it. This Larsen bloke was an ex-railways man, a cleaner, and Dad knew him from those times. Dad decided he’d had enough of being a railway man, after the suicide thing, the woman killing herself under his engine, and he wanted to put it all behind him, to branch out. Yes, ‘Leyland and Larsen’. It had a sound to it — a bit of a ring.

It was a partnership, and after a short while, according to Dad, this Mr. Larsen chap, the acquaintance that he’d joined up with, was actually turning out to be no kind of businessman. In fact, according to Dad, Larsen wasn’t even a worker — not given to exerting himself at all. Not the slightest bit of use. Of course I didn’t personally know about Mr. Larsen, I was 10 or 12. It was all hearsay to me. I wouldn’t want to slander his memory.

You obviously got one side of the story. I wonder what Larsen’s view was?

I don’t know, but it turned out, from Dad’s point of view, that Larsen was a bit of a deadhead. The whole idea was a bit of a catastrophe. Dad was very critical. He could be like that.

I’ve been told since that’s often the way of the world with partnerships. A pig and a poke. Win or no win.

So this bloke Larsen was said to be hopeless, and the sad thing was there was money involved — loan money, all the way. See, Dad had first of all borrowed from his father for the house, and then there was money in the business. I’m sure that’s how Old Phil ended up in the cartage business. I think he may have bought out Larsen. Then after Phil put money in, and he was supposed to be semi-retired, he kept on with horses and delivered for Barraud and Abraham for ages. Well into the 1930s.

I think I might have told you, way back, that Old Phil and Dad worked together for a while. Leyland and Son. They did that together until about 1929 when Dad went off logging. The father and son had stables and a forwarding agency, over near the Majestic Hotel. Fitzherbert Avenue. Then they worked as carriers, and were the last people in the city to run such a business with a horse and cart. There was lots of cartage work around Palmerston North in those days. The town was an important railway junction. There was Abraham and Williams — up Rangitikei Street. Even after he retired Old Phil would take himself up to their shed. All the staff knew him. And he had a ritual, a sort of show of strength test, a self-test, to demonstrate he still had the power. He’d lift a sack of spuds or grain onto his back and walk around with it. He was short, but very strong.


Your Dad’s cousin Betty — his brother Wilf’s daughter — she told me that when she went to Old Phil’s birthdays he’d hoist her onto his back and carry her around like a bag of wheat, but when she got older she put on a quite a bit of weight. Quite a bit! At his 90th birthday she turned the tables and triumphantly hoisted him. ‘Gotcha!’ she said.

He’d have enjoyed that.

But a long way prior to that, Dad drifted off into logging on his own and left Old Phil to run the carts until he retired. I think he finally retired in 1938, the year you were born. You were starting, Old Phil was finishing.

In spite of having a business himself, and being in a kind of partnership for sometime, one of the things Old Phil talked to me about was his opinion of the whole affair.

‘Peter, the Leylands in general, are not good as businessmen. A Leyland is no damn good at organising a business.’

And he was very convinced of that. To him, it was A FACT. 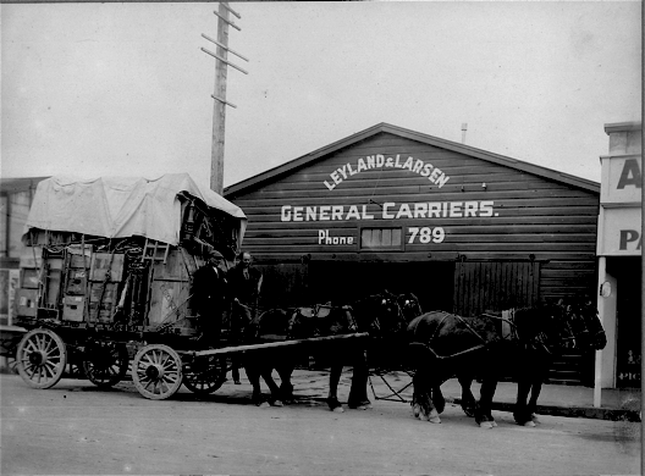 Estimated date of photo — 1921-3. Peter's father, 'Mick' Leyland is holding the reins.The other man is probably Mr James Larsen. Location; upper Fitzherbert Ave, Palmerston North, near The Square. Interesting features; new German Bechstein piano on the cart, the 3 digit phone number on the shed, and the Palmerston North Borough Council number on the cart. The shop on the right is Alexander Clark. Photo from Peter Leyland’s collection. Scanned by Clyde Williams. A digital copy is available from Palmerston North City Library.