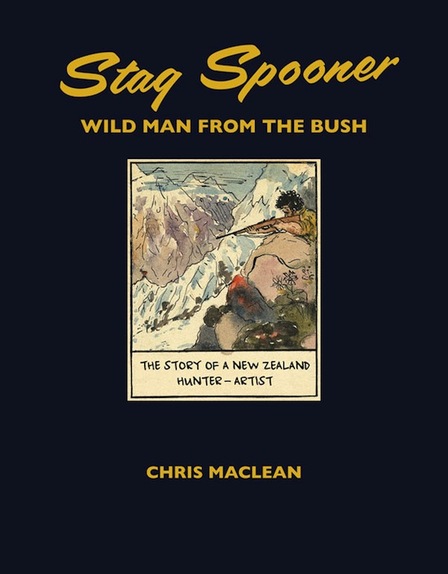 Hi Pete, I’ve been browsing through a book about a ‘Wild Man From The Bush’ — Stag Spooner — a hunter/artist who culled deer in the Tararuas around 1940. It reminds me of your stories — full of yarns about rifles, fluke shots, roughing it in the bush and all that.

What did you say the bloke’s name was?

Don’t know the name. What did he get up to?

The book includes a copy of Stag’s ‘visual diary’ — over 300 sketches, each with his comments — cutting tracks, enduring storms, shooting Kea in Westland, eating parrot stew, and wood carving on wet days.

What did he carve?

One project was a walking stick with a spiral stem and a carved statue of himself for the handle. It ended up in the 1940 Centennial Exhibition.

I think saw it! They’d start with a sturdy bit of timber, not just any old bit of a branch — Matai perhaps, and whittle it down.

Yes. One drawing shows the spiral pattern marked out on a substantial piece of timber. The diary’s chock full of experiences, some are very exciting, others pretty dismal.

I remember the way your dad and I started our overnight hunting trips. We got ourselves all kitted out with a little tent, a so-called pup-tent, and also had a ground sheet, and we told Old Phil we planned to go up in the ranges and sleep out, overnight. We were pretty proud of our tent and gear and our rifles and were sort of boasting about it to the grandfather, and he understood our enthusiasm, and he probably glanced up at the sky as the experienced ones do, and wished us luck. We could tell that he didn’t really recommend it, but he let us go ahead with our scheme. And our dad was there, and he has his say too — he warned us, but we knew best and off we went. Bill and I had plenty of energy.

So we got up into the bush, and night came on, and something happened to the tent, maybe it wouldn’t work or we couldn’t get it up in the wind, and we spent the night huddled up against a tree trunk on our groundsheet. It was cold and wet and miserable, a horrible, rainy night, and we were trying to get some sleep. We must have got in under the tent somehow — got it over us for some protection, and I remember that we were sitting there, trying to wring a bit of comfort out of the situation, and the day started coming on. And I had nothing else to do but note what was happening, and there in front of me, only a few inches from the end of my nose, I saw our tent changing colour. It was white to start with, the colour of the flimsy white cotton it was made from, but it started to change as the sun came up. It was quite a spectacle, and when we got home I told the old blind aunt, Aunt Maggie, about what I’d seen, and she likened my experience to the Bible story of Noah’s Ark and the flood. She said that Bill and I had been flooded with rain, just like Noah, so, in our own small way we’d had our experience of The Deluge. She said that when it was all ending Noah sent out a bird, a — a — what sort of bird was it?

Yes — that's it — he sent off a dove, and then after that, when the rain had fully stopped, God sent Noah a rainbow. And that morning, when I had nothing else to do but stare in front of me, I saw the wet, white cotton change through all the colours of the rainbow. It was all very quiet. Spectacular. Right at the end of my nose.

Of course we came back home empty handed. No success. We didn’t repeat that mistake. Once was enough. But at least I saw all the colours of the rainbow. I remember that.

Later on we ventured out again, but we’d learned to chose our time, and sometime we’d have a bit luck and catch something. On one occasion we went out into the coastal country and got a Sambar deer. They were imports from India, and well known for their huge antlers, up to three or three and a half feet long. They always had only three points on each side, but were heavy and impressive. We had that set of antlers on display in the passage-way at College Street.

There's a picture here, of Stag’s first trophy. 18 pointer, 41 and a half inches across.

Different deer had different arrangements of antlers and points. That was a good size.

You’d love this book. Stag had strong opinions about all sorts of things — the best ammo — the average number of bullets a good culler should expend per kill …

What did he say about that?

In his opinion three bullets per deer was wasteful — very poor shooting — despicable almost. A good hunter should average less than two, and that’s allowing for misses and an occasional second shot to finish a wounded animal.

That reminds me of one hunting story that shocked me to the core — one of the real horror stories — and it concerned one of my schoolmates, Bert Duffield. Like the rest of us he was a hunter, and he and some of our other mates headed off on a expedition, but for some reason I missed going on that occasion. They all had their guns and push-bikes and could go anywhere around the district. And when they got back they told me all about a hind they’d shot. 27 bullets went through her! It took them 27 shots to kill one animal, and that’s a fact! Horrifying.

Stag’s best score was three deer with one bullet.

That sounds unlikely, but there was one occasion when I was out with my son, and we were going for a private rove around with our guns, and several ducks came over, so I up and fired at a couple of them — BANG! BANG! — and down they came. ‘There they are,’ I said, ‘Two dead ducks on the roadside.’

And my boy was looking on and he said, ‘O.K. Pop. You got those two ducks down with two shots, but how did you manage that third one?’

I hadn’t even seen it, it must have been in line with one that I shot. The third one had just got in the way.’

It’d have been a better story if you’d scored three with one barrel.