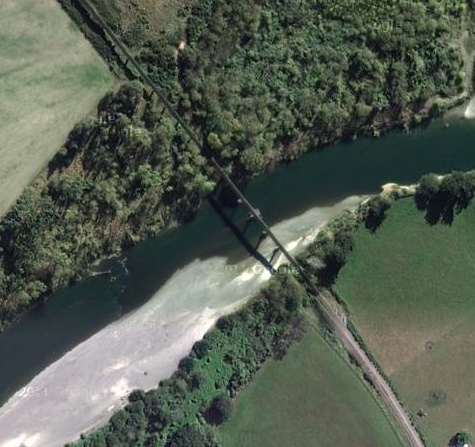 John, after you told me about the photo of the railway bridge over the Awapuni Lagoon, I got thinking and I remembered some of the rail-bridges over the Manawatu River. There was one down below the township, between Linton and Longburn — and another to the north, up by Ashhurst.

What us boys liked was that you could walk out onto those bridges, so long as there were no trains coming, and have an adventure. You’d step from one sleeper to another. It required a bit of balance.

Most of those bridges were for rail only. But the walk out to the middle was fascinating for us. We liked to do it.

The Manawatu is the largest river in the North Island — no, that’s not right — that’s the Waikato. Maybe Manawatu is second. Anyway, it’s big and interesting.

Walking out onto a ‘Railway Only’ bridge was more or less against the law. The authorities took a dim view of it. We ignored the laws, and did our own thing. The laws didn’t take into account that it was very intriguing to us to go out halfway, or wherever the river was deepest, and lie down and poke our heads over the side to have a good look at what was going on. Of course we had one ear out for the train. You could hear it coming from miles away, long before it got there. Loud whistles. Chugging.

Now what we discovered was that you could lie there and study the habits of the big trout. Brown Trout. There they were, doing their thing, and unknown to them they were being watched. They’d feed, and ripple the surface, and sometimes we’d see a couple have a fight. Bill and I were fascinated.

Later on, early in my working life, I took up trout fishing. I’d go up to Taupo. I had the proper gear and the licence. You need a licence. But some people didn’t bother with that.

Did you ever have your pea rifles with you, and get tempted to shoot trout?

We tried. We were kids. And we had enough sense to keep away from the authorities. We’d be careful and made sure we didn’t get seen. Pea rifles were getting to be a bit frowned on because of accidents. Some kids were careless.

So you actually shot at trout?

Oh, yes. Not a lot, mind you. Just the odd shot — here and there. After all, there we were, all alone in the middle of a long bridge, with a rifle, and those trout swimming around. Big fat trout. You’d see them plain as day when you looked down. To us they just seemed to be asking for it.

Did you hit any?

We did shoot some. Mind you, they are a tricky kind of target, on account of the ripples and the way water distorts the target. Unless you’re actually looking right down on the fish, then it’s not exactly where it seems to be. If you’re looking from an angle the water bends the light. Refraction. But it was pretty short range, and we were both very good shots, so we’d give it a go.