The Spoils of War

… John, the other day you mentioned the Navy Band. Tell me about them.

Well, Peter, they played all sorts of music –– Dixieland jazz, marches, music from stage shows. They played an English tune in different styles, like a Bavarian OOMPA band, then like a wind-up gramophone, and a Japanese orchestra.

Japanese? The Navy? Of course that puts me in mind of my brother Fred. He was in the navy during World War 2. He joined up early on. Keen to get into it. He had some good stories to tell — varied experiences. He was 6 years in the navy, on different ships. Achilles. He went to the UK and finally, on the Gambia, was in Japanese waters for their surrender. He was often on watch on the bridge with the captain and senior officers. So he got to hear and see things.

One story he told was about one of our ships sailing from the Atlantic to the Pacific. It had to pass through the Panama Canal. The captain was accompanied on the bridge by some American authorities and they were trying to oversee the transit. There were thousands of Yanks in the area — security forces — they had control. Security mad. Well, in the canal you have to pause for the locks to fill up, or empty out, and the way the Americans were doing the emptying exasperated this captain. He finally got so exasperated that he said to these Americans, ‘For two pins I’d go full steam ahead and ram that bloody gate, and go through on the overflow.’

Fred said the Yanks all panicked. There was a real to-do about it. This New Zealand ship had steam up and was ready to smash the gates. Anyway, the captain got some action going.

But the story I liked best was about when they arrived in the Japanese harbour, Tokyo Bay it was, to represent New Zealand at the official Japanese surrender. The Allies were taking over, as the conquerors, as the bosses. Anyway, according to Fred’s story, when they dropped anchor, our boys saw there were hundreds of Japanese pleasure boats moored nearby, a whole fleet of them, all around, very expensive and owned by the wealthiest Japanese. And our lads were up on the deck looking down on them

Well, there was one young sailor, I recall he was a friend of my brother, and he was a bit sharp apparently, a junior seaman, he’d been swatting up on old naval laws. And he asked his superiors if he could have permission to speak to the captain. Eventually he got his way, and Fred got to find out what happened.

This young sailor pointed out to the captain that, as part of the conquering force, he was entitled to a share of the loot –– the fortunes, or spoils of war. It was his right, he said, under the laws of war and the sea. He said he rather fancied one of the pleasure boats.

The captain had a sense of humour and asked him if he'd decided which one he liked, and the seaman said he had.

The captain said he’d not have anything to do with what the seaman had in mind but said, ‘You're the lucky one. But you have to get it home.’

So the captain turned a blind eye while the seaman organised the hoisting gear on the Gambia, and they fished his prize-of-war out of Tokyo Bay and lowered it down between the two main guns. ‘You’ll be safe and happy there,’ he said.

So, after the surrender was signed, the prize got taken home to Auckland. Hijacked 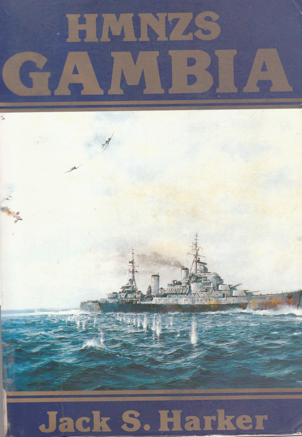