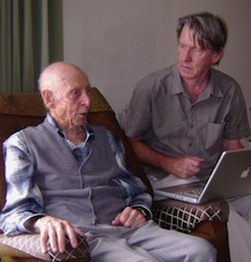 John Leyland discusses Peter Leyland's stories.
Peter
Peter was born on 21st January, 1912.
His name was registered by his Polish mother as 'Ronald Leonard', but he was almost immediately renamed 'Peter' by his father (see story 3).
Peter became, at 100 years-of-age, one of world's few centenarian authors. He did this, not by virtue of being an author who lived to 100, but more unusually by becoming an author after his 100th birthday. Initially he resisted the idea he was an 'author', arguing that a 'real' author actually did the writing, but once he got onto the idea of having a 'scribe' he accepted the decision of the National Library of New Zealand that he was indeed the author.

John
Born in Palmerston North, New Zealand on May 6th 1938. He never suspected that a phone-call to Peter on the day Peter's wife died would result in the collection and publication of his uncle's stories.