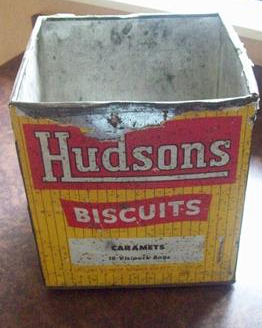 Aha, Peter, Yvonne tells me I’ve caught you at a good time — between lollies! I imagine your mouth’s empty and you’re ready to spin a yarn.

Hello, boy. Yes I suck on a Blackball every now and then. One of them goes a long way.

How long have Blackballs been around— 70 years?

It’s one of the old names, and there were others — Aniseed Balls. Fruit Drops.

The lollies I remember are from the 1950s, when I was working at McKenzies Department Store. Milk Shakes. Rum Balls. Some might seem excruciatingly modern to a veteran lollie-sucker like you. Humbugs, Coconut Ice, Jelly Babies ...

Occasionally, very occasionally, we got chocolates, but usually they were far too expensive — out of reach — not at all common in the Leyland house. The cheapest treat was broken biscuits. Of course, in those days biscuits came to the shops in tins, about a foot or so square. There were all types. Tennis Biscuits. Milk Arrowroot. Chocolate Wheaten.

To buy biscuits in those times you’d go up to the counter and wait to get served, and the bloke or woman behind the counter would come and ask what you wanted.

And you’d say, ‘Half a pound of Malt Biscuits’, or whatever it was you’d been told to buy. And if you were allowed a treat you’d say something like, ‘And a penny worth of broken biscuits’. Now that was a very good deal. All piled into a brown paper bag. You got the broken bits left over from the tins. There was no prepacking in those days. Your biscuits were all bagged up to order on the spot.

The trend to prepacking must have started in the 1950s. My boss at McKenzies Department Store, Ted Clarke — he was Fred Dagg’s father — he was very competitive, so when the idea of prepacking arrived Ted was one of the first to set up a biscuit-packing room. Ted was selling biscuits in clear cellophane bags well before the biscuit companies got onto it. He was very proud of his counter displays. ‘Impulse selling,’ he said. ‘The way of the future, John. Self Service. Mark my words.’

He was right. That was the end of the line for broken biscuits. They’d been such a good thing for us kids, all down the years. When you foraged around in your paper bag you’d get wee bits of all the varieties. A big selection. Full of surprises. That was a real treat, particularly if you got a bit with chocolate on it, or icing. One of the joys of childhood.

So Fred Dagg’s father helped kill off your broken biscuits?

Who said progress was good?

WHO SAID, ‘PROGRESS WAS GOOD’?

I can’t hear you. The phone battery’s dying.

Perhaps you’d better get back to sucking your Blackballs.

Eh? Eh? Ring back some other time. 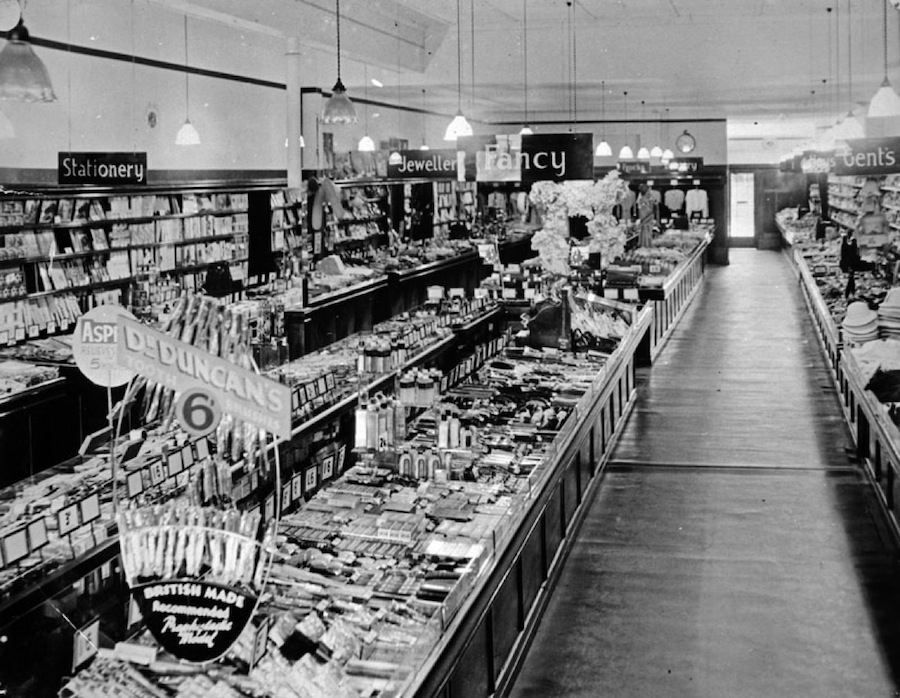 McKenzies Department Store. c1937. By 1955 (when 'John the Scribe worked there, polishing the same floors) the area to the right of the back door had been walled in, and made into a storeroom for tinned biscuits and confectionary. Ted Clarke established a biscuit packing room behind the wall on the left of the picture. He converted the display counters on the extreme left (next to the Stationery sign) to display biscuits packed in clear cellophane bags. The days of the broken biscuit were ending. (Photo Palmerston North City Library. Digitisation ID no.- 2009N_Bc264_BUI_2490