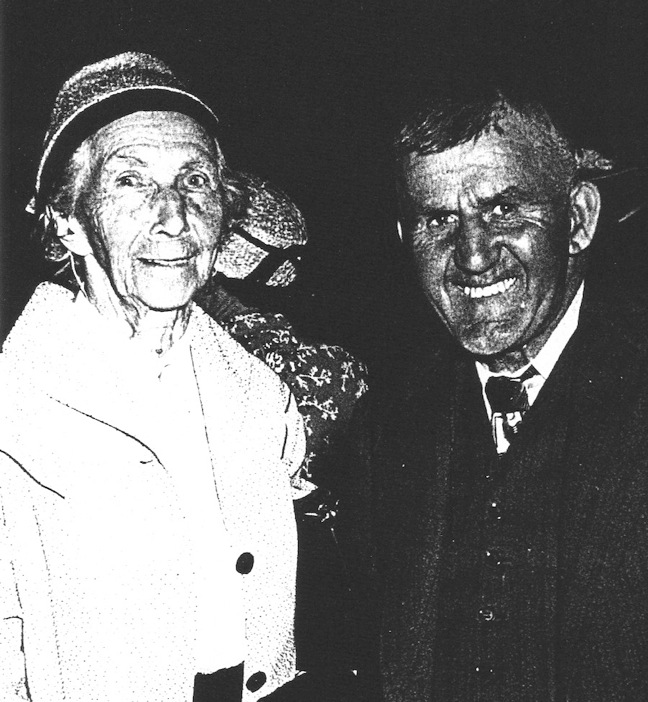 Tom, with his aunt, Emily Hill the tailoress and dressmaker, who had her business on the corner of Dahlia and Princess Streets, Palmerston North.

How are today, Peter?

A bit sad, for several reasons. I went to a funeral today, up in Palmerston, for an old friend aged 90, Trevor Taylor. So it’s come to this — we’ve lost an old friend and buried him today, but the extra sadness for me is that I don’t remember as much about him as I should remember, I know I should, but I just can’t remember as much as I think I should. Even at 100 I feel I should still have all those memories, but I don’t, and I can’t do anything about it. It’s all a bit regretful, yet I remember small things from long before, even details.

That is sad. Even though I’m just a boy in my 70s, I know what you mean. I can remember a lot about mum’s cousin, Tom Pollard, and that was before I was 10, but I remember much less about people I spent more time with when I was older.

Did you say ‘Tom Pollard’? We knew him! He was well known in the city. A real ‘identity’. What do you remember?

I have a strong recollection of how much I liked it when Tom visited us, because he loved chopping wood, and that was my chore, but Tom would spend a happy hour or two chopping away.

He would visit us too — call in at our house.  His family were near neighbours when Jean and I lived in Campbell Street. When we were new-comers to the street, the Pollards were very friendly and made us feel welcome. But Tom’s mother warned us about him. ‘He’s quite harmless,’ she said. ‘Just don’t worry about him. He wanders around, cadging.’ So, after she’d explained things  we just took him as we found him.

I remember he walked with a shuffle, sort of ambled along. He was classed as ‘an invalid’. A constable who was new to town ran him in for drunkenness, but the other cops sorted it out and took Tom home in the patrol car.

Yes, he’d just wander around, and when he’d get to our place he’d come on in and let out his morning cry — always exactly the same question.

What question? Every time he visited our place he’d ask me the same question. ‘John, would you rather get kicked by a horse or run over by a car?’

No, we didn’t get that one, we got the morning cry. How’d you answer him?

I explained I didn’t know which was worse because it depended on how hard and where you got kicked, and how much of you got run over by the car. But Tom had had both things happen to him, and because he couldn’t figure which was worse, he kept asking, trying to get to the bottom of it.

Tom sure liked his cuppa. He’s say to my grandma, ‘How ‘bout a tuppa tea, Auntie Ede?’ It was my job to make it, and when the teapot was empty, I’d tidy up. One day I emptied the spent leaves out of the teapot and put the pot back on the table. Tom picked it up and frowned. ‘It’s empty!’ So he got up and poured more hot water into it from the jug on the stove, gave the pot a swirl, and poured himself another ‘tuppa tea’. He added milk and sugar, then drank it down without noticing it wasn’t tea. It was just milky water. Obviously there was something different about Tom.

But he was harmless and polite, no bother or trouble. We tried to make him feel he was one of the family. Everyone treated him respectfully. That’s how it was in the city in those days.

I liked him because he loved chopping wood. I could sit in the shade for hours, happily seeing him do my chores. It was as if I was like Tom Sawyer watching Ben Rogers whitewash my fence for me.

That’s boys for you. Anything to avoid what counts as work, but endless energy for fun.