… speaking about ‘Old Man Just’ has sparked another memory. I remember that name very well. They had a plant shop somewhere in town. B H Just. I remember the initials. Yes — B.H. I don’t know what they stood for.

I know the old man originally called his nursery ‘Botanical Nurseries’. I wonder if gave that’s what gave the name to Botanical Road.

I recall there was a big plant nursery down the south end of town, towards Awapuni somewhere, but I think the naming would have been the other way around. The city fathers, back in the old days, probably gave the road its name before Mr Just came on the scene. He’d have named his nursery after Botanical Road.

But now you’ve reminded me of that firm, it puts me in mind of my mother — wherever Mum was living she’d have a garden. She was a keen gardener. Loved her plants. We kept in touch with her, and when we visited she’d always have something to say about visiting Mr B H Just for some plant or other.

Your front garden in Marriner Street was always colourful.

Well, of course, Jean took care of that. She enjoyed that sort of thing, like many of the wives in the district. They wanted something to look at, something to set up and get flourishing. It’s a different mentality to me. To them it was important that it LOOKED NICE. I’d look at it and say, ‘Damn it, if I can’t eat it, why bother?’

You’d rather go fishing — or hunting?

More to the point I’d rather grow something useful.

Coloured vegetables are good. Of course I don’t remember coloured silver beet in my day. But red beet — beetroot — is excellent. And the thinnings can go in a salad. Good eating. No waste.

Red is good, and pink. Something vibrant. — something exciting. Red cabbage looks impressive. Catches the eye.

Red gives you plenty to choose from, tomatoes, capsicum, strawberries …

One thing I’ve learned recently is that the authorities are saying that the more colours in a plant, the better it’s supposed to be for you. Fruit and vegetables with lots of colour have more vitamins and minerals, things like vitamin C. But the wisdom is that it’s no use just looking at the colour — admiring it — you’ve got to EAT IT! Looking at it won’t sustain you one little bit.

And you’ve got to know what to do to get the goodness out. With beetroot you’ve got to boil the mature root for the correct time. Spuds for instance, twenty minutes at a steady boil, or even twenty five. It makes them digestible.

You don’t need to waste anything. All those waters — into the soup pot! Every one. Chop up whatever’s to hand — in it goes. And add a bit of salt. You must have some salt.

Salt! There’s a swing away from salt in the diet. It’s a stroke risk.

Well, look at me. I’ve had salt all my life. Some things NEED salt.

Grandma had a saying, ‘Eating an egg without salt is like kissing a man without a moustache.’

She knew a thing or two. There were such sayings because it was recognized that some things must have salt. Take porridge for instance. In the morning, all my life, I always had some cooked porridge for breakfast. As a kid it was compulsory. No arguments. And into the porridge pot there was always — always — A HALF A TEASPOON OF SALT. Every day of my life. It’s a fact, porridge is no good without salt. From an early age we learned how to make porridge. And the first thing you did before you set it boiling was put in the salt. It was the routine, a vital step.

But, Peter, these days the shelves are full of ‘no salt’ or ‘low salt’ products.

So what! I’ve always been a believer in salt, but it could be a two-edged sword. You can’t let yourself go to excess. Just half a teaspoon in the porridge pot.

There’s no arguing with you, is there? You’re living proof of the benefits of 100 years of salt.

Of course salt is a well-known preservative. In the old days, if you killed a pig you’d salt it to keep it from going off. Salt was the only real answer before refrigeration. Is it plausible that I’m a tribute to the preserving power of salt? 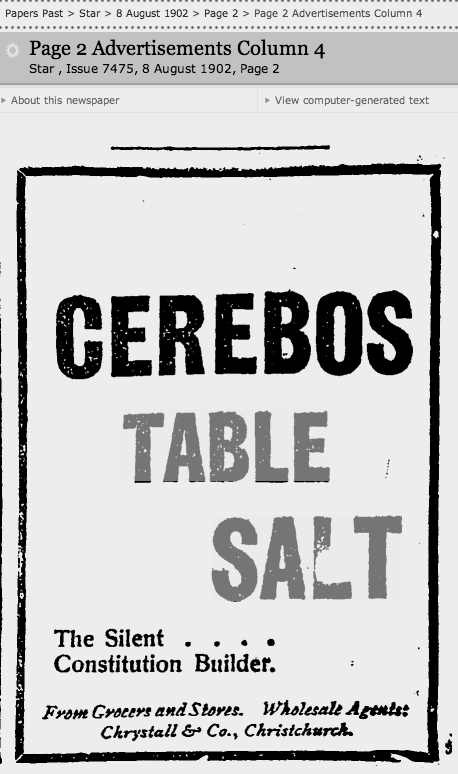