Greetings, Pete. Your boy, Phil, has just been explaining the Alley Salute.

It seems it was the way the Alley family showed their pleasure or satisfaction. He suspects it came down from your Irish grandmother, Francis Alley, and …

Phil says he saw both your father and Aunt Florrie do it.

According to Phil they stood with their feet apart, grasped their hands together, raised them above their heads and punched them towards the sky.

I can’t recall it at all. How did the idea of it being an Alley family thing come about?

Your young Phil read somewhere that it was exactly the same gesture Rewi Alley was described as using. He concluded it had to be a 'family thing' that got passed down from a common ancestor.

I can understand why Rewi might have used it. When he started that Gung Ho movement in China, they were really up against it, what with the Japs invading and cutting off supplies. And when they had some success with their projects they would have certainly wanted to show their pleasure — to show everything was going well — was okay. It sounds like it was an ‘okay’ gesture. And that’s another interesting one — tell me — where did the word ‘okay’ come from? How did we get to use the word ‘okay’? OKAY!

I heard one theory that the bloke who checked the Ford cars coming off the assembly line had the initials ‘O.K.’ Perhaps his name was Oliver Kane or something. When a car passed inspection it was OK’d.

He checked it off. That might be the answer. I heard, even in my day, that they said about their model T’s, ‘It is OK to have any colour you want, so long as it’s black.’

Then some of the marketing agents said, ‘Black is the best, because it keeps the car warm, and absorbs the heat from the sun.’ That’s marketing for you. What about the poor devils who live in hot climates? I bet the agents didn’t push that angle in the desert areas. But the car was a sensational success.

Shall I give it the Alley salute?

There are some things people can be proud of — give them the tick. The Ford’s were like that. Approval. An O.K. A bit of celebration.

Like having the book sell out? Is that worth a salute, a tick, an okay?

… here we go again! I held the pen, you opened the mouth! That’s it. No mouth — no book. They were YOUR STORIES. And they’re going into the libraries, including Waikato University and The National Library of New Zealand.

I do admit it’s amazing to see that happen, isn’t it? ME! MY STORIES! And I only got as far as Standard Six at College Street School — left at the age of 13, and we’ve got a book in a University library! That’s not too bad for a Standard Sixer.

Well done for a poor little boy from Palmy. Even if you refuse celebrity status, you can’t avoid being a bit of a legend. Mind you it took you a while. Slow off the mark! 100 years.

To be honest — it’s quite fun really.

What’s this? They’ve landed me with a feed. Tea has arrived. Smells okay too.

Would you rather talk to me, or eat your tea?

There are some times in life when things are no contest.

I’ll salute to that.

Geoff had visited Rewi in China, known him well and written a book about his life. John told Geoff  the Leyland's story of 'the Alley salute' and asked if he had any knowledge of it.

'Sure have! And I've had the privilege of being a recipient. Rewi gave me the salute when I was leaving China. Here's how it goes.' 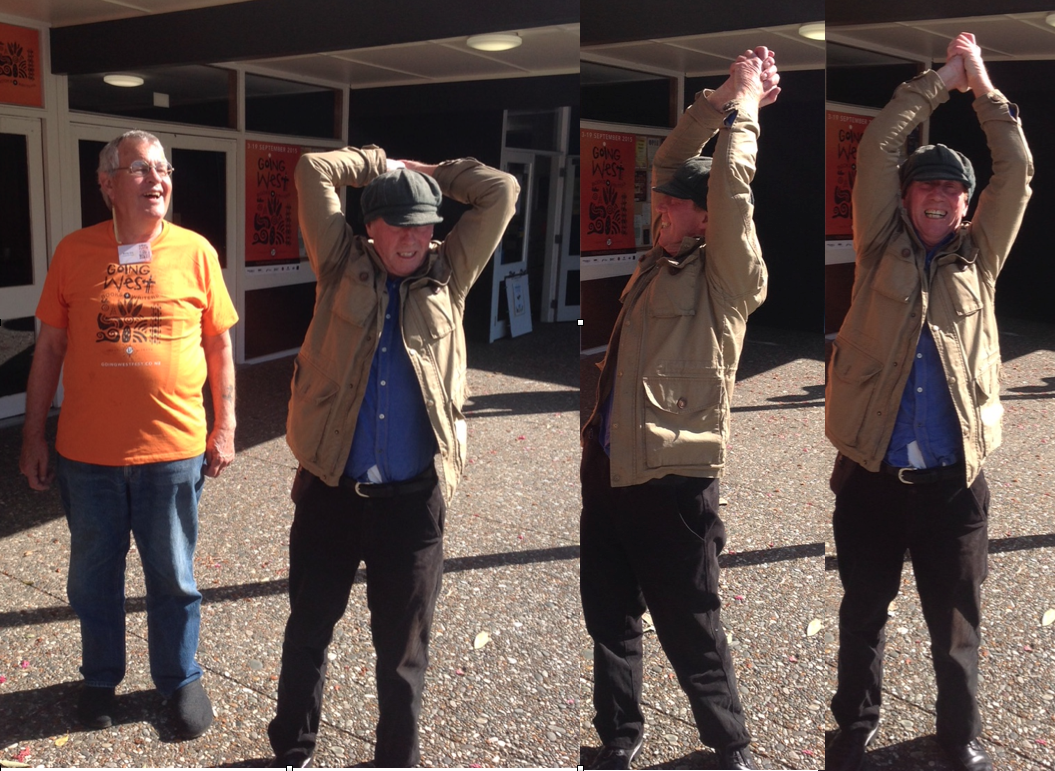 Geof Chapple demonstrates the 'Alley Salute' outside the Titirangi Memorial Hall. Sept 2015. Murray Gray,, founder of the festival, looks on.