My name is John Leyland (John David Leyland, if you want to get pedantic).
I'm not a professional writer or historian, but here's what I've discovered so far. I decided to use a 'conversational style' to preserve and present Peter's stories. I probably didn't invent this method (who knows) — but it made sense under the circumstances. Then came that wonderful day when someone asked my advice about collecting and recording oral history. Big mistake ... never ask advice of a Leyland! 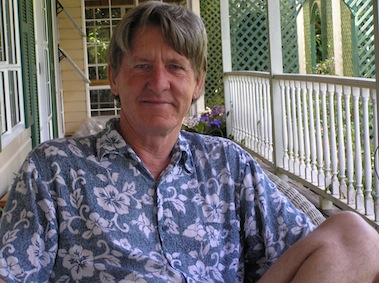 John Leyland,
At the outset of my adventure I had no intention of publishing Pete's stories. The notes I scrawled were for my own benefit. It soon became clear I’d stumbled across a goldmine of historical interest — in fact, I’d struck pay-dirt. Since then I’ve heard comments like, ‘I wish I'd got X's stories down before they died’. Every person has a history. As one social worker said, ‘I’m tired of burying libraries.’. So, for what it’s worth, in the interests of history, here's my tuppence worth.

Decide if you've got the motivation to see the job through. You don't want to have your subject get dejected, so don't over-blow your objectives. One step at a time. Start with the promise of 'writing down one story'. See how it goes. Perhaps make a list of what might keep you going.
Here's what kept my nose to the grindstone.
I came to enjoy it — a real friendship deepened.
Talking to Pete was a doorway to information about my father (who I’d barely known).
Pete encouraged me. ‘Thanks for ringing, boy, it gives me something to think about.'
I learned surprising things — like how to make bottle bombs!
Friends and family were enlightened and entertained.
The local library got excited. I became a ‘publisher’.
Friends got started telling their stories.
I got given chocolates by the Palmerston North City Library, and Pete absconded with them.
Need I go on?

Be realistic about the time required to collect, write, edit and distribute your work. Peter’s 102 stories were  ‘captured’ over twenty-three months — between his 100th and 102nd birthdays — that's a little more than a story a week. I'm a periodic insomniac, so I have often have time during the night!

Get stuck in. Dreaming won’t get anything done. Start as soon as you can.

Use a method you’re comfortable with — take notes, make a sound recording, use a video camera, or do all three. You mightn’t have to do all the work yourself. Can you get others involved? Family? Neighbours? Workmates?
I went 100% down the ‘solo note-taking’ route, making long phone calls, so I'll talk about that method.

Note-taking tips.
1. Concentrate on capturing key facts and interesting expressions (particularly idiosyncratic ones).
2. Date each session.
3. Keep your notes in order. Initially I made my notes on separate pages, then graduated to large notebooks.
4. Develop abbreviations. I used things like 'OP' for Old Phil, and a arrow for 'and then'.
5. Leave space around your notes, or write on every second line. This gives space for expanding the notes after the session.
6. Where necessary, denote comments and questions with a mark or symbol (J for John, P for Pete). You need to know who said what.

Review your notes immediately after each session. I used a different coloured pen to expand or clarify what I'd written. I wanted to be sure what were my original notes and what were my subsequent 'recollections', expansions or corrections.
Perhaps you could retell the story to a friend. Tell it using your subject's 'voice' and expressions. refer to your notes if that helps.
If you can’t read your own scribbles, bring the subject up during your next session.

Decide on a suitable format for your finished work. I used a ‘conversational’ format, because it made my job easier, and enabled me to showcase Peter’s style and voice — he would butt in, repeat himself, add a string of synonyms, go off on a tangent, hijack my conversation, and indulge in an occasional rant. I wrote myself into the script because it made sense to do so. You can write yourself in or out.
An alternative is to present your subject's stories as ‘stories’ — and here I use the word ‘story’ to include opinion pieces, anecdotes, scandals, but all without your comments.
You could use a 'question and answer' format, as if between a reporter and a subject.

Type, or neatly write up your work as soon as possible. I used a word processor (Microsoft Word) on a computer. I added each new session to the previous ones, and sometimes invented a title. This made it easy to edit and print. It also made it easy to add the new information or quaint expressions which invariably cropped up in subsequent conversations. I tried hard to capture Pete’s way of talking, using his expressions and style. People have told me, ‘I can hear him talking when I read his words.’

Back-up your work. I emailed progress-copies to friends and family for comment and safe-keeping.

Prepare for the next session. When you read some of Pete’s stories, you’ll notice I periodically include, or refer to, material which I 'happened to have to hand’. This was never an accident. I often did research between calls. This material showed Peter I was taking my job as 'scribe' seriously. It also confirmed or jogged his memory, opened up new topics, or provided illustrations to fill out the page. Pete, being a ‘frugal’, was pleased when my draft printouts fully utilised the page with relavent images.
My preparations included making a list of possible topics, any questions I had concerning the nature or sequence of events, and news, emails or comments people had made.

Edit your work. Ensure that meanings are clear, that unintentional ambiguities are avoided and that entries have some focus and real interest.
I divided my master-file into sections and emailed them to friends and family, seeking comment and asking them to edit, proof-read and make suggestions. Some people proved hopeless at this, others got stuck in, one marriage was placed under threat, but lots of good suggestions were made. A common problem was that some readers got too interested in a story to notice the typographical errors! You still have to triple-check everything yourself.

Here are some ways that may help you self-edit.
1. Print out your work and edit it on paper, rather than on your computer screen.
2. Use a larger font size, or magnify the work on your screen so that it looks different and is easier to see. Large or different type let’s you notice errors.
3. Get someone (or your computer) to read it out loud to you, or read it aloud yourself.

Some sections may have 'boredom-potential' for some readers, and this is one justification for adding pictorial material and creating a humdinger of an index.

Consider adding an index. Making an index is like fishing. You bait some hooks with intriguing entries. Did I overdo it? Index.

Add images. Very few people are interested in old photos of rows of ancestors. Use pictures that have interesting people, settings, clothes or action. In New Zealand we have a searchable digital resource provided by the National Library where it possible to find and use old newspaper articles, adverts and photos. It is good practise to acknowledge your sources.

Check your final draft with your subject. Be sensitive. Be prepared for surprises.
Pete’s listened carefully as his stories were read back to him. and we usually got the tick of approval. When he felt that his poor, but second-hand, opinion of someone might lead to legal action, he wanted his words softened.

Distribute your work.
You may not need to wait until you have ‘finished’. Of course, some people will never ‘be finished’ because they’re slack-arse procrastinators or inveterate titivators. If you've tendancies in those directions there is a simple way to avoid ‘never getting it done’. Distribute it in episodes, or sections. People seem to love ‘getting the next one’.

There may be an even greater reason for early distribution. I published Pete’s first collection when I did because I wanted him to enjoy the result. At 100 years of age, who knows how much time anyone has left? Something as simple as a fall could end it all. As it transpired, Pete just went on talking, and had several falls, and kept going in and out of hospital like a yo-yo while ‘Roaming’ was being printed and launched. That’s how I accumulated a second batch of stories. Unfortunately he missed out on seeing them completely finished, but he did get to hear Tina White’s article announcing their completion.

I got Pete’s first collection professionally printed by Publishme Print and Publish in New Plymouth. If you live in New Zealand you can obtain a copy of ‘Roaming Around In My Mind’ from several libraries, or via your local library's interloan service. If you get and study it you’ll see what can be done by an amateur writer, a team of willing proof-readers and a professional printer.

Your local library will probably not only help you, but prod you along, and may introduce you to other writers.

There are numerous publication resources online to help you. Beware of people and firms who want to ‘do it for you’, and offer you ‘marketing packages’, and editing skills, and worldwide distribution and and and. Unless your subject is famous or notorious, keep your perspective. Your work is unlikely to be a best-seller. Your main market will be family, friends, future generations and local libraries.

It's also possible to distribute your work as a computer file (pdf or .doc). Recipients can then read or print it as they please. This is the route I've taken with Pete’s second collection. I might make it available as an ebook on Amazon.

Oral History. I didn't have any problem getting Peter to talk, except when he was unwell, breathless or tired. He was never bored with his own stories and seemed to not even imagine I might have heard some before.  I had heard several before, and knew his reputation as a chronic ‘gasbag’ — in fact I’d seen eyes roll when he had hijacked someone’s ears and was in full flight, retelling something they’d heard before. I also noticed that when Pete was in 'full flight’ it was almost as if he was in a trance — completely lost inside his story, re-living the excitement or adventure, almost oblivious to the listener, and you got the impression he was back inside that time, even as he was talking about. While every story-teller has their own style, I imagine that Pete's style is possibly like that of many of the ancient tribal custodians of oral history. I like to think so. It's just a thought.

Thanks. Full credit for the publication of both collections goes unreservedly to Robyn Wilson of the Palmerston North City Library. Her enthusiasm and advice turned my personal family history project into a social history resource. Robyn suggested the professional publication of the first collection, told me how to go about it, insisted on an index (so I went overboard on that!) and alerted me to available image resources. Many of the people who helped, and were acknowledged, in 'Roaming' again gave the second collection valued support and encouragement. Thanks to you all.

Best of luck. … and for heaven’s sake, make sure you add a damn fine index!