Good afternoon, Uncle Peter. I hear you’ve been in the limelight yet again –– cutting the celebration cake at the Wischnowsky family reunion.

Well, it’s sort of inevitable as a 100 year-old man. Mum’s family, the Wischnowskys –– there’s lots of them nowadays you know –– they pick on me for that sort of thing. It’s not very onerous. You just take up the knife and stab the cake. It was a big celebration and they made a whole day of it. We got a feed out of it. One thing worried me a lot, and it has for donkey’s years, is that some of the men at these celebrations overdo the grog, but yesterday turned out to be okay.

I’ve been continuing some family research, and, getting back to the Leylands, I found that one of your uncles, Alfred Phillip Leyland — the one who went to the Boer War in 1901 — ended up on the Defaulter’s Roll during World War 1. Perhaps he got called up for the Big One and refused to go?

Interesting. There was lots of prejudice and strong feelings about those people. I don’t recollect any mention of an Uncle Alfred, but we heard a lot about Uncle Digby. He was supposed to have gone to the Boer War. All the troops were mounted in those days. It was before tanks. They were all horsemen.

Digby is a mystery to me. He seems invisible in the records. I’ve searched but not found. There’s no record of his birth. No mention of him in school records, electoral rolls or in the National Archives. He wasn’t on the Army Rolls. He’s like a ghost.

Oh he existed. Digby had a reputation in the family, sometimes as a bit of a rebel, sometimes as a very capable man who could put his hand to anything and make a good job of it. Digby was, by all accounts, a smart bloke, the Top Man, the great family favourite.

In fact, old Aunt Florrie — when she spoke about him — she spoke with reverence! So I asked her, ‘How come your brother Digby gets all this admiration?’

Florrie said, ‘There’s no doubt about him, Peter. When Digby puts his hand to anything, he does it well, and he can do almost anything.’

So we were often treated to some memory or story of Uncle Digby.

But Uncle Digby had a disease, and the family talked about it. He had a disease they called ‘Wanderlust’. He’d go anywhere and everywhere, so we didn’t ever see much of Dig, and some stuff he got up to was a bit unusual, like tropical adventures. He went to Fiji eventually. First of all he got himself into their Fire Brigade, then, soon after, we got the news that Dig had become the Head Man of their Fire Service. Next he started up a butcher’s shop. ‘Leyland’s Butchery’ he called it, and eventually he sold it to the Indians.

Well, there was a bit of a sequel to him having that shop, and it makes the story of Uncle Dig a bit spectacular. Many years later my father visited Fiji with his bowling club, and he saw this sign up there — 'LEYLAND BUTCHERY' it said. So he walked into the shop to take a look, and while he was waiting there to talk to the man behind the counter — an Indian chap, a Hindu perhaps, who’d taken over the shop long ago  — some customers came into the shop. While Dad was talking to the shopkeeper, one of these customers –– an old, old lady –– came up and stared at my father, and she listened in as he talked. After a while she announced, 'Leyland's back again!'

So the family likeness was there. And in those island societies, where they didn’t go in for the written word much (everything was by word-of-mouth), those old ladies could remember the tone of voice. So she looked, and listened. ‘Leyland’s back again.’ No doubt about it.

Digby had long since left Fiji and sailed off to Australia — Queensland I think, and had something to do with racehorses. Some Leyland men were horse-mad. But that day his likeness came back to visit them.

Did you ever actually meet Digby?

Perhaps only once, when he paid a brief visit. He may have stayed a day or so. Anyway, he packed up — and went. I remember my mother, when Digby was leaving. She said her goodbye to him and watched him go. Then she turned to me and she came out with a most startling statement.

My mother! She said that to me! It was very confidential. It seemed like Dad wasn’t getting the attention.

Now, as a schoolboy, some things just brush off you –– things just pass you by –– but I tell you –– I remember that! ‘I could go to him!’ she said. 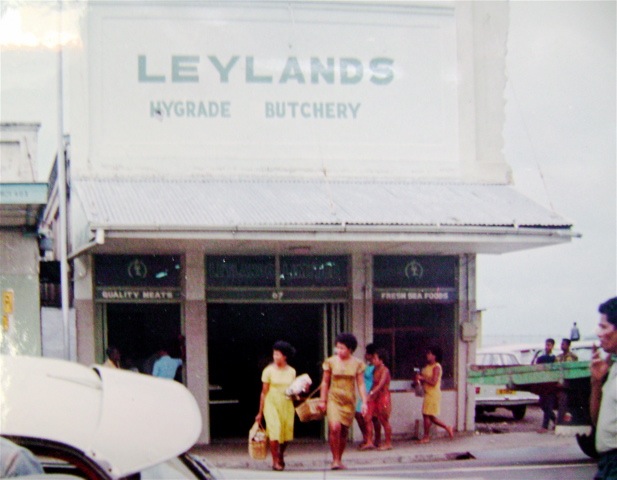