One thing about us Leyland’s, back in those old days, was that we could actually do things — lots of things — and that’s because we had to. I remember Old Phil saying to me, ‘Peter, with those two hands of yours you could do anything. There’s no limit. A famous surgeon. Anything. If only your father had brains enough to get you the education, the encouragement, the training.’

Old Phil was very serious about it, and it was true. I’m no good at writing, but I became known as the young fellow with good hands.

I recall that there was a manufacturing business over the road from where we lived at 665 Main Street — Martin’s — and I was looking at this place every day, and seeing as this firm was handy I started working there as a sort of ‘mechanical engineer’ so to speak. The building included a foundry, and they had a series of furnaces and specialised in cast iron, but they also got onto casting steel, which was much more difficult. I only worked there for a little while, and I helped when they repaired old cylinder blocks, usually with four cylinders, and when these blocks were worn they’d come in to get rebored to over the regular size, and the oversize bore was measured in thousands of an inch.

Anyway, while I was there I developed a reputation for measuring the inside diameter of the cylinders more finely and accurately than anyone else. I used a micrometer — an ‘inside micrometer’ which was about the size of my thumb — and you’d wind it in or out to take the measurement. Very adjustable.  It was the best. Highly accurate. Moore and Wright specialised in making that sort of thing. I understand they started out in Sheffield. Now, their micrometer relied on a great sensitivity of touch, and I had a good hand, particularly my right hand, and my work actually got to startle the natives — several times in fact — but even though their comments were friendly, they were serious about it. I remember there was a bit of an outcry on one occasion when I’d been measuring a block that had been bored out, and was supposed to be finished, and I said to one of the men, ‘The bore of number one cylinder is half a thou bigger than number three.’

See, I’d close my eyes and go entirely by the feel of the micrometer. Soon after that a rival firm heard about me. They came and offered me a job as their full-time operator, and with better pay. But I turned it down because I’d end up doing nothing else but boring cylinder blocks, and I knew the sheer monotony of it would drive me crazy. Dammit, I thought, I’m not going to be stuck doing repetitive work when I was quite happy doing a variety of jobs.

Did you ever hear about Old Phil’s uncle, Luke Swallow Leyland? He was a member of the Royal College of Surgeons and invented an improvement to a skull-boring device.

Skull-boring? I think they call it trepanning. There’d be lots of specialised equipment needed for that work.

I know Old Phil’s parents frequently wrote letters back to Yorkshire, so they may have known about Dr Leyland’s project. The device was called a trephine, and I’ve got a copy of the Uncle Luke’s instructions somewhere. He said a ‘great nicety of touch is necessarily required’. You could have taken up brain surgery 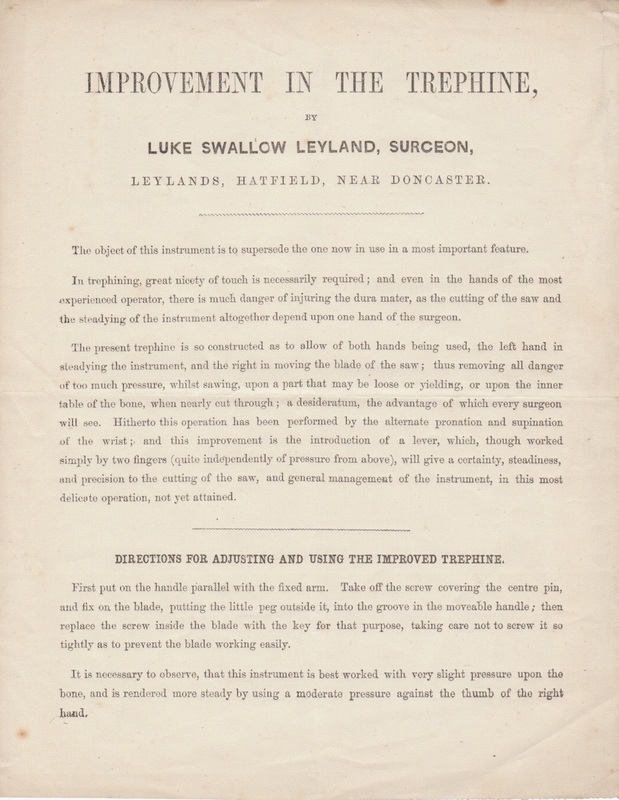 Old Phil may have known about his uncle’s work, and that was certainly a pathway he saw for me. ‘You could have been a surgeon.’ He said it often, and reckoned I had the hands for the job — ‘The Leyland Hands’ he called them. And there was no doubt I would have liked surgery.

The thought of it makes me sick. I’m too squeamish. But I can easily imagine you fossiking around in someone’s brain or guts.

No problem. Us lads were always skinning or gutting things. The first and biggest problem that stood in the way of Old Phil’s plan was money. It’s not that my Dad didn’t have the brains to get me into more education, we simply just didn’t have the money, and I think Old Phil may have been speaking from a sense of guilt. See, he’d faced the same problem with Dad, and here he was with a son who had brains, who’d been dux and won a scholarship, and what did Old Phil do? He sent his son out to work! THEY NEEDED THE MONEY.

How poor were you?

I worked for my father for years with no pay, but I enjoyed it, and he was good to work for. That was in the late 20s and early 30s. Money was out of our league. He couldn’t afford to pay for me to travel away to Otago Medical School and be boarded and pay the fees. We lived in depressed times. We were stuck. No government help. No hire purchase. No student loans like there are these days. And the Leyland’s would never ‘book it up.’ Old Phil’s watchword was, ‘Live within your means!’ Probably a saying from Yorkshire.

I saw an old family autograph book — 1914 — with an entry signed by an F. Leyland. ‘Trust in God, all others CASH DOWN!’

That’s how it was. I passed my Proficiency Exam — that was the minimum — but there was no thought or pressure for going on to college. Mind you, Dad encouraged our learning and reading at home. He taught us to study things, to think things through and figure them out. We boys had enquiring minds, and lots of energy.

So poverty was the real problem?

That was the first problem.

See, I had a friend, an old school-mate, and we went hunting and fishing and mountaineering together, so we got to know the measure of each other. He knew I had a leaning toward getting more education, but it was only a leaning, not a real inclination. I admit that. And this friend explained it to me, exactly the way he saw it, ‘Pete,’ he said, ‘you could have done anything, but you just couldn’t be bothered. You’re too bloody lazy.’

That’s how he summed it up — ‘too bloody lazy’. Yes, I knew I could have been swotting and studying, but I always asked myself, ‘Why all this effort?’ I’d rather go fishing.

Somehow I never got fired with ambition, I never picked that up from the ancestors, so, even if the money had been available, I just couldn’t be bothered.

And one of the uncles summed it up. ‘To be a surgeon, a specialist, you’ll have to be ‘on the ball’ and train for years and years to get the qualification with that seal of authority — OTAGO.’ And now that I’m 100, I don’t mind admitting it. ‘Too bloody lazy’. I had the hands, but not the hankering.

But, I get the impression that, as lads, you didn’t sit around doing nothing.

Oh no, we were gun-mad. Interested in getting out into the bush. As young men we were keen on getting things done, whatever took our fancy, whatever we got a passion for we’d have a go at doing it or making it: a dinghy, a step ladder, a laminated fishing rod, a model boat.

I’m not that handy. I wanted to frame the cover of your book so you could hang it on your wall. I cut corners, rather than timber. The local charity shop had exactly the right size. $10. I ripped out the old picture, put in the new, added new hooks and string. BINGO! DONE!

I’ll bulk the parcel up with some of your favourite lollies, to ‘protect’ the frame, and I’ll stick an envelope on the back with copies of the newspaper articles about the book.

Food for the eyes and for the stomach. Good boy.

It puts me in mind of Jean. My wife always had artistic blood, and eventually she joined up with a group of ladies — six or seven of them, a whole mob you might say — and they all went in for the artistic life. And, of course, I’d admire their paintings — that’s what you do — yes, I had the stupidity to say their work was nice, to praise it. But I was the mug. Jean was a bit of a leader of this group, a star in it, and it had become an amalgamation of like minds, you could say it was a gang, a gang of ladies, with only one man, and this gang did what gangs do, they all ganged up on me and persuaded me to make the frames for their art, seeing as I liked and praised it so much.

I discovered a firm up in Waipawa where we could get the proper framing materials. The gang made quite a fuss about it because there were all sorts of patterns and colours, but to get the wood at the right price we had to get a fair bit of it. The other shops in Palmerston started complaining because they could see they were losing business, so I had to become a proper ‘manufacturer’. It was a set-up, of course, just to get the right price. I was the Chief Framer for the gang.

And what I soon discovered about framing was that it’s incredibly difficult to get all four corners exactly right. It takes a lot of care and skill to mitre the 45 degree cuts, so I asked a local builder for some tips, and what he said was, ‘Just keep trying. Practice makes perfect.’

So it became a regular fixed thing. The gang painted. I made frames. I must have done a hundred or more. When they put on one of their exhibitions they’d flatter me with a sign: ‘FRAMED BY PETER LEYLAND’.

But I knew who was framed! It was me. 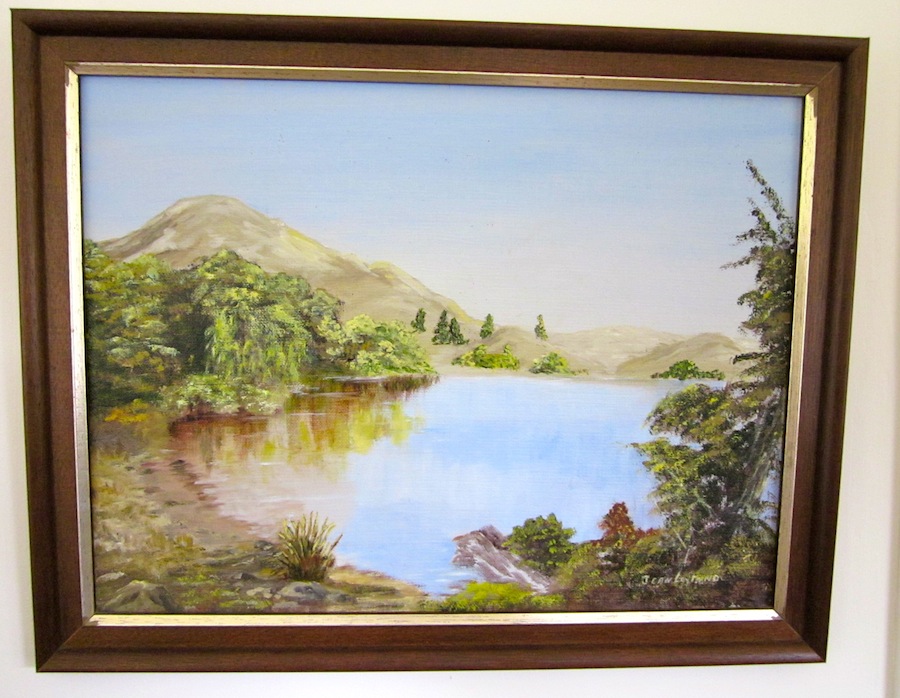