How are we doing, Pete? Do you want to rest, or shall I go on talking?

You talk, and I’ll try and keep quiet. Take a breather.

Do you remember my father’s photo you gave me? I’m getting it framed and …

I remember it well. A hand-coloured enlargement. We had it specially done. It’s what we did in those days, got black and white photos enlarged, gave them to an artist, and got them coloured. That old photo with the Championship Belts he won in 1930 always reminded me of what Bill was capable of doing — of what he might have done if his life had turned out different.

I was grateful to get it. I know it meant a lot to you. Last week I bought a rare old badge of the New Zealand Army Rifle Association. I’ll mount it on the frame.

I found out the Association was formed in 1923 to ‘foster military style shooting’ — snap-shooting and that sort of thing. The senior ranks shot for the King’s Medal, the other ranks and cadets shot for other awards. There were cash prizes. The Association was disbanded in 1931 — so Dad’s 1930 win was the last time those trophies were fired for. Did the authorities take the belts back?

I don’t think they did. Each year previously they’d stick on a new badge with that year’s winner — name and date — so the belts were decorated with lots of crests. But I don’t remember any further shooting matches.

So Bill kept the belts?

I think so. I think they stayed with him. They were in the old College Street house for ages. Of course those are all old memories now. Old Phil might have kept them. Who knows what happened?

Well, at least I have a picture of Bill with them. Your son, (I like the way you call him ‘Young Phil’), told me of an incident when you and my dad went hunting at Santoff. That’s a forest, isn’t it?

Yes — Santoff — it’s out on the coast, west of Bulls. It was a bit of a magnet for us young fellows — us hunters. It’s a big forest, along the sand dunes — huge — and swamps — quite noteworthy for Sambar deer.

What sort of deer’?

The story I heard was that you two ‘put up’ a deer — a huge stag — and as it was taking off, Bill up with his rifle and shot it. One shot. BANG! Got it.

Oh, by the way, wasn’t it a tad dangerous firing  rifles at the drop of a hat?

We were trained — drummed into us — be careful — ‘ALWAYS IDENTIFY YOUR TARGET’. It’s a Golden Rule. Always identify the target.

So Bill identified his target, then hit it first shot?

I understand he put his success down to his skill as a marksman.

He did. But I disagreed. In spite of him being New Zealand’s Junior Champion.

But why? He was a crack shot — a snap-shooter — champ at a moving target.

So I pointed out to him that the rifle he had that day was rubbish. It was an old service rifle from the First World War. You could buy them cheap. Left overs. .303 calibre. Worn out. They had mountains of them. Sheds full. Wanted to get rid of them. So I looked at the rifle, and I said, ‘Bill, look at this, with a weapon like this it must have been an absolute fluke.’

I guess he stuck to his story.

He did — for a while. But when you examined that gun it transpired that the action was totally worn out. It’d had a hard life. The bolt was sloppy, and when you put a round into the breech it barely stayed there — it nearly fell right down through the barrel. The rifling was gone. So when you fired it, the bore was so worn there was not much pressure behind the bullet. We talked it over for quite a while, your dad and I. A discussion between brothers. It was decided, later, that it was a fluke — a total fluke. There was no doubt about it. 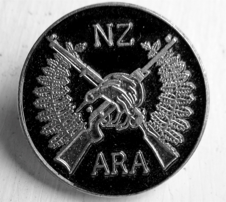