Okay, Peter, I’ve some news from back in the 1920s. I've found an advertisement for the shop where you bought your Chater-Lea bicycle.

I just can’t bring the bloke’s name to mind, or the name of the shop.

How about ‘The Ideal Cycle Works’?

That’s it! You’ve got it. The Ideal Cycle Works.

‘Ideal’ was the ONLY Chater-Lea agency in Palmerston North.

But the man’s name escapes me.

Warner! That’s him. He knew a thing or two about bikes.

I can read you the advert. 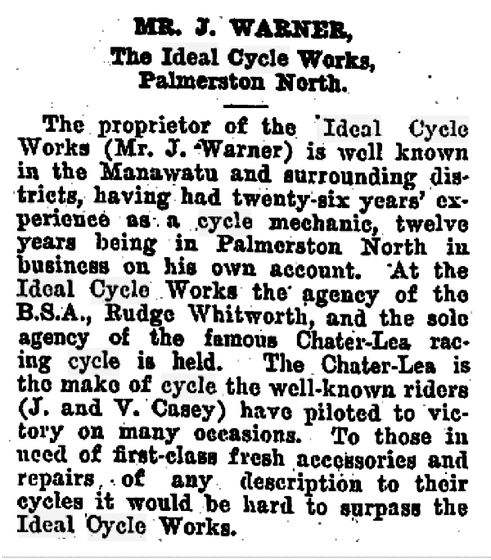 Peter, do you remember if his shop on The Square?

I don’t recall the location, but most of those old cycle shops stocked the leading makes of bike, except only one had the Chater-Lea racing-bikes. Number One. The best.

I also searched out a bit of information about Chater-Lea. I see that the frame was made of lightweight tube. Did they use aluminium?

No, not in those days. Aluminium became popular later, for aircraft and the likes. But the metal used for bike frames came in long tubes, 20 foot lengths. In those days many of the local shops throughout the country imagined they could make a better or cheaper bike frame than the big overseas businesses, so they’d sketch up a plan, cut out some brackets and reinforcing plates and the likes, often triangular but with specific angles, then they’d cut the tube down into shorter bits — all the required lengths. It was all done to suit their ideas of the perfect bike for the job.

So they welded it all together to make a new frame?

They actually used a technique called brazing. They brazed it together, using jigs and the like, and once they’d got it assembled they’d connect on components from the big companies. There was a good trade in components. Sprockets, hubs, chains and the like. You could buy all the bits that you couldn’t make in your own shop. Chater-Lea did a good trade in components. They were the best. But I didn’t go in for that. I bought the real thing. The finished article.

With the dropped down racing handlebars?

Of course. We wanted to not only race, but we wanted to look the part. We were pushing the boundaries, and you had to look as if you were into it. That was part of the scene.

I thought it was my dad who went for style and show.

If you owned a Chater-Lea, you had to look the part. Part of the scene.

It’s all part of the picture.

I'm curious about your pride and joy. Give me more details. Did it have a lamp for night-time riding?

I had a lamp. It was law, even back then — you had to have a headlight. And there was a bracket made for attaching whatever you used to the front of your bike, and whichever way you turned the handlebars, the light would shine that way.

What did you use? Oil? Batteries? Dynamo? I liked the dynamo. The faster you pedalled, the brighter the light.

We didn’t use batteries or dynamos or oil lamps. We had a carbide lamp.

My Grandad Mechen had one of those on his old Hercules Roadster. 1940s. Even in those days it seemed old-fashioned to me — like some old Heath-Robinson contraption.

Well, you had to go to the bike shop and buy this stuff called carbide, calcium carbide, and put it into the lower chamber of your lamp. And above that chamber was another one, a sort of water pot. And you’d set the lamp going by turning on a tap, a sort of screw-valve that let the water drip slowly down onto your carbide. The water converted the carbide into gas — an inflammable gas — acetylene gas, and the gas would pass up through a sort of wick-like filter material and finally come out through a tube in the centre of the reflector. And when you put a match to it, it formed a good strong light. You got some virtue out of it.

It seemed like a bit of a rigmarole. Give me the dynamo any day.

Well, I was familiar with that system too, and people thought it was very modern to have your own electric generator mounted on one of the wheel forks, and when you flicked it on — pressed it into position by operating the spring that would engage the winding wheel with your tyre, it would work as you peddled along. Now, to my mind, that was one of the failings of the device. You were expending some of your peddle-power to make light. Wasting your breath. The dynamo system didn’t get my approval. The carbide lamp gave me light for very little effort. The contraption worked! And NOTHING SUCCEEDS LIKE SUCCESS!

Even so, carbide lamps seemed like they belonged in a museum.

And there was another benefit. If you used a dynamo, then when you stopped peddling you had no light — no light at all — a darkness descended all around you. But the carbide lamp gave a light even when you were stopped. You could see your way to the gate or the bike shed.

True. I heard that the railway engines in your father’s day used an acetylene headlamp.

Acetelene gives a very powerful light. Most effective. Used in lighthouses as well.

I rest my case, your honour.